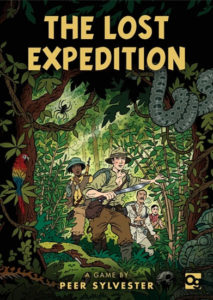 The opening scenes of Raiders of the Lost Ark (now Indiana Jones and the Raiders of the Lost Ark) are legendary. The precise sequence of shots and movement of subjects in the different scenes creates the mystery and danger viewers anticipate through the whole film. Gamers looking to capture some of that feeling might be interested in Osprey Games new offering.

The Lost Expedition is based on Percy Fawcett’s attempt to find a mysterious city hidden in the Amazon, made more famous in the novel (now a movie) by David Grann called The Lost City of Z. In the game, players take the role of the hands fate as they try to bring the success of an expedition to find a lost city. It’s a game for 1-5 players and takes about 30-50 minutes to play. Playing with more than two players is best.

During setup, each player will be dealt four cards. Each day of the expedition has a Morning phase and an Evening phase in which cards are played. These cards will determine the actions that take place and the progress of the meeple (representing the adventuring team) along a track of Expedition cards.

In the Morning phase, cards are played round robin until everyone has played two cards. Then played cards are ordered by their numbers. Finally, players proceed through each card and resolve the icon effects on the cards, discussing along the way decisions from each card. These could be beneficial options, but more often they are a choice between negatives.

Many also feature choices such as losing valuable ammunition for food or sacrificing a team member for further progress towards the lost city. In resolving all the card icon effects, the group can discuss strategy freely, but not while playing cards.

As soon as the expedition meeple reaches the last card showing the lost city, the players win. If all the explorers die, the team loses.

From seeing the movie The Lost City of Z (a great production on Amazon, highly recommended), the game definitely captures the difficult choices and struggles of an adventuring party into the unknown. The difficulties faced are all based on first-hand accounts from Percy Fawcett. Overall the theme is brought home very well.

However, the biggest flaw in this design relates to the randomness of the cards. While the fully random deck does promise that every game can have a world of difference in strategy, the game’s difficulty only allows for success when the fated order of the cards is on a player’s side. When the cards that allow progress show up at just the right times, the game is stressful and rewarding. However, if the cards happen to be all at the end, there’s little way to win.

The other pitfall of this design is that the game mechanisms are more rewarding with more players. Card effects can move cards around and playing the game with fewer players causes fewer cards to be present. As such, more often than was expected, the card movement effects were useless.

Despite these misses, The Lost Expedition is challenging and quick. It showcases the right kind of difficult decisions in a cooperative game; those where players can discuss strategy and those where they can’t. This combination leads to a minimization of dominating gamers taking over decisions.

While The Lost Expedition misses the mark on setting up the deck for an appropriate challenge in terms of spacing of progress, it aims true in terms of cooperative play and thematic connection. It’s a simple enough game to teach quickly and get players into decision making while retaining the challenge for seasoned gamers. If players don’t mind losing from luck too often, The Lost Expedition is a solid experience.

Final Score: 3 Stars – The Lost Expedition brings some dangerous and thematic fun, but the unmodified randomness in the cards causes the win or loss to feel arbitrary.