We review The Initiative, a puzzle style game published by Unexpected Games. In The Initiative, players are working together to solve a series of puzzles over a 14 mission campaign. 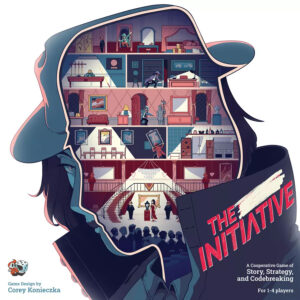 This review won’t spoil any of the content in The Initiative. Only story elements that appear before the first mission are discussed.

Along with some friends, you are digging around a yard sale. Like most yard sales, nothing too interesting to speak of. But there is some old board game called “The Key.” As a fan of all things tabletop, you figure, why not. You take it home to play with your friends. From there all kinds of adventure awaits.

The Initiative is a cooperative campaign-style game that unfolds throughout fourteen missions (and there is more to explore after the main story). While there are more than a handful of cooperative legacy games these days, The Initiative goes about things a bit differently. So let’s dive in and see what it’s like.

Each mission starts with loading a mission card into the console. This hard plastic cardholder will cover the solution on the backside of the card with tiny windows to reveal as you play. Think kind of a low-tech wheel of fortune. The mission cards are also available online if you prefer to go the digital route and not bother with the cards and plastic holder. The mission card will present a question at the top and to win the mission you have to correctly answer that question.

You’ll also set up the board as depicted on the mission card. In general, you’ll start in a room and there will be clue tokens scattered about facedown. There is a deck of resource cards in three colors, numbered 1-12. Each player will get four cards and you’ll choose a start player. Every player will take a turn taking one or two actions.

To take an action you must play one of your resource cards to that action’s discard pile. But the card you play must be higher in value than the last card played to that action. So, the first player can essentially play any card to do any of the actions. However, if they play a 6 card to the “move” action, no one else can move without playing a 7 or higher.

The available actions are:

Each clue token you gather will have a symbol on it. This symbol may correspond to one of the icons on the mission card. If it does, you can reveal the information under the window. You don’t need to collect all of the clues necessarily, just enough to deduce the rest of the puzzle and answer the mission’s question. But you don’t have all the time in the world. Once the resource deck is depleted four “time” cards get shuffled back in. When three time icons have been revealed the mission ends and you no longer can guess the solution. One of the times has two icons, so essentially once any time cards have been revealed you are no longer safe in drawing more cards.

When you think you know the answer you can remove the mission card from the holder and check your answer. Campaign progress can change a bit depending on if you win or lose but you’ll move to the next mission either way.

Playing The Initiative starts out very similar to many family-weight cooperative games. The basis of the gameplay is pretty straightforward—move around the board and collect clues. However, there are a few wrinkles to keep things interesting. You can gather clues regardless of if they are face up or face down. But you can use the intel action to flip over clues that are far away to prevent yourself from running across the board for useless ones.

Some clues, however, are traps. And some traps only trigger if they are revealed with the intel action, often temporarily preventing you from taking one of the game’s main actions. It is a careful balance of play between when it makes sense to gather and when it makes sense to intel. There is also quite a bit of strategy at managing the resource deck. When this runs out the discard pile gets shuffled with the time cards. But if you spend time when the deck is getting low, regrouping the actions, you’ll have more resources in the discard pile, lowering the chances you draw time cards.

And of course, you have to work with your teammates to make efficient use of your actions. Playing a high-value card on an action will definitely impact their ability to use it in the future. While it sometimes may be necessary and the rules prohibit telling other players the exact value of your cards, you can discuss generally a strategy to keep everyone on the same page.

But pretty basic cooperative game mechanisms aside, the mission system is really what makes The Initiative shine. It’s basically impossible to get every useful clue and flip over all the windows. So you’ll have a code-breaking puzzle element of trying to solve the mission’s questions without perfect information. This can also be an important thing to consider while you play as there may be certain symbols that, based on their placement in the puzzle, seem more likely to help you figure out the answer.

To not spoil anything about the campaign experience I will keep things quite general. The storyline throughout isn’t going to be optioned into a movie deal anytime soon, but was enough to keep the group engaged. It’s family appropriate as well so The Initiative would work perfectly for kids of reading age. The missions are varied throughout the campaign. There are secret cards that get revealed between missions that also give you fun things to do. It’s really the confluence of secrets, puzzles, and cooperative gameplay that makes the game stand out. It’s one of the few games in the past few years that I can honestly say asks players to do things or think about things in a way I’ve never done in a board game before.

While I am basically in love with this game, there is one big problem. That plastic mission cardholder. Mine was basically unusable out of the box. The opening was much too narrow for the card to slide into. I mangled the first mission card. After some prying I was able to very painfully and slowly work a card into the mission holder. So for my group, we pulled the mission control website up on an iPad and mirrored it to a TV in the room and it was all perfect. But if you have some opposition to using the website in lieu of the cards, I can’t really recommend the game because there is a reasonable chance it’s unplayable.
(Update: Unexpected games is offering free replacements if you have a problem with your mission console, details here).

Luckily, the website is really great and solved this problem. The post-campaign missions are on there as well and give you more content. Although, without the story and secrets to hook you they are a bit less fun to play through. Hopefully, with the digital solution already in place, more story driven content can be created.

I was caught off guard by how much I liked The Initiative. I didn’t expect a light cooperative game to really grab me. But it did. And we played through the campaign’s 14 missions in two sessions. Even though we binged it all very quickly, I also appreciate that each mission is short enough to play a couple in an hour and just pick it up later. The code-breaking portion of The Initiative isn’t just external to the mechanisms as your success hinges upon using the code to help figure out which actions you should be taking.

Here’s hoping for expansion content through the website. Heck, I’m willing to shell out some bucks for The Initiative DLC. Are you listening Unexpected Games?

Final Score: 4.5 Stars – One of the most innovative games in quite a while. A wonderful mix of cooperative gameplay, story, and puzzles.

Hits:
• Family weight cooperative gameplay with a few fun strategies to consider
• Mission-based objectives gave each play a unique feel
• Campaign secrets along the way were thematic and fun 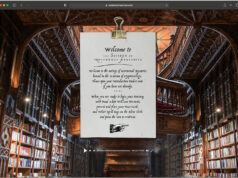