We review the World War 1 cooperative card game The Grizzled, by Cool Mini or Not Games. In this hard to win game, players must work together to overcome the trials of the great world war. 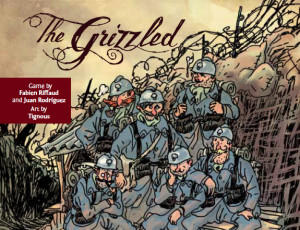 Released at GenCon 2015, The Grizzled is a cooperative card game set during World War I. Despite the war theme, there is no combat. Instead, The Grizzled focuses on the mental impact war has on the soldiers who fight in the trenches. During the game, players will attempt to navigate around their fears, and support each other throughout missions.

The Grizzled is a cooperative, hand management card game for 2-5 players that takes about 30 minutes to play. The Grizzled plays best with 4-5 players.

In The Grizzled, players attempt to complete missions while avoiding threats and hard knocks that can impact the team’s ability to complete the mission. On their turn, players will play cards from their hands to no man’s land, ideally without adding a third matching threat (symbol) to the board. Players can withdraw from the mission at any time, but the number of cards that players have in their hand at the end of the round will affect the amount of threats added to the deck.

Players may also encounter hard knocks that get played on themselves that negatively impact them on missions. If players successfully play all of the threat cards, revealing the peace dove, they win the game! However, if the threat deck runs out and the monument card is uncovered, the players lose.

Although from Cool Mini or Not, The Grizzled falls entirely in the “or Not” portion of their offering. There are a few cardboard speech tokens, a cardboard standee for the leader and a deck of cards. Not a single miniature in sight.

But the cards are beautiful. Illustrated by French cartoonist Tignous, who died in the Charlie Hebdo attacks in Paris, the artwork is highly stylized. It looks like a political cartoon-fitting for a game that is supposed to be fun, but takes on a poignant and heavy theme.

For players to win, there can be no cards covering the peace card and no cards in any of the player’s hands. On each player’s turn they take one action: play a card from their hand, give a speech, use their lucky charm or withdraw.

Playing a card from their hand allows a player to add a card to no man’s land. Alternatively, a player can play a hard knock card on themselves and will have to deal with the negative consequences of that card. If at any time, one of the six threats (rain, snow, night, shells, gas masks or bullets) are represented three times in no man’s land, the mission is a failure. If a mission fails, all cards from no man’s land are added back to the peace deck.

On any turn, a player can withdraw from the mission. When they do so, they place a support token facedown. Support tokens either point left, right, left 2 or right 2. This indicates which player at the table you are giving the support to. Once all players have withdrawn, support is revealed. If one player receives a majority of support, they can discard hard knock cards (2 if the mission was successful, 1 if not) or retrieve their good luck charm.

Other actions allow players to remove cards without adding anything to no man’s land. If a player has a speech token, they may discard it from the game to give a speech, helping to assuage the fears of their fellow soldiers. The speech giver will name one of the six threats and the other players with a card showing that threat in their hand may discard it. Speeches are powerful, but limited and must be used wisely.

After support is resolved in the game round, if any player has four hard knocks, the players lose. Otherwise, the total number of cards in hand are counted and that number of cards are taken off the monument card and added to the peace card. This indicates the falling morale of the soldiers as the war continues to drag on.

Rounds continue in this manner until either the players lose by revealing the monument card, a player has 4 hard knocks or the war ends when the peace dove shows up.

The first thing that caught my eye about The Grizzled was the theme. It’s unique and evocative. It’s a war game that doesn’t glamorize combat or even tactics, but is solely focused on the emotional impact of war on those who participate in it. This leads to a unique and immersive gameplay experience that doesn’t exist in many games. The theme comes through incredibly strong, especially for a card game with only a handful of cardboard components. The mechanics tie in exceptionally well and you feel sympathetic to the characters you are playing.

The artwork is similarly unique and the tragic death of the artist only makes the theme about the ravages of war hit that much harder. It’s beautifuly and sensitively done. Although cartoony in style, because of the political nature of the subject matter, it feels perfectly placed.

Despite the dark and heavy theme, The Grizzled is also just a lot of fun to play. It’s tense and you are limited in what you can discuss with your teammates. If you really need them to use their good luck charm to remove a card so you can continue playing, you just have to close your eyes and hope they can read your mind.

It can also be immensely frustrating to not get support when you need it. When you give support to a player, they keep the support token. So in later rounds, although the player on your left may need support, you might not have the option to give support in that direction, due to a lack of the right token.

The hard knock cards seem innocuous at first, especially compared to playing a card in no man’s land. You get to get rid of cards in your hand without adding to the threats. However, they can also really wreck the game as it goes on. One, for instance, makes you give your support randomly rather than choosing. Since one player must have a clear plurality to get the support benefit, it will can make the support phase really work against the team. Others are even worse – not allowing you to withdraw, forcing you to withdraw early or randomly adding a threat to no-man’s land. Strategically playing hard knocks when you are able to quickly get the support of your teammates to remove them is key to surviving The Grizzled.

The Grizzled is extremely difficult to win. In about a dozen plays, I’ve won twice. From the reports of other people, I’ve heard that’s a pretty good win rate. The difficulty can be adjusted in a few ways. Simply adding more or less cards on top of the peace card can impact the difficulty. Some cards trigger “traps”, where a card is added to no man’s land from the top of the deck when played, and you can also ignore that mechanic for an easier experience.

The Grizzled has been my go-to filler game for about the last year. While waiting for the last player to arrive, or just wrapping up the evening, it can be set up quickly and played in about half an hour. Yet it has plenty of strategy, tension, and interesting decisions to keep bringing it back to the table.

I was just as surprised as anyone to see a small card game from the folks at Cool Mini or Not Games. And even more surprised at just how fantastic it is. The Grizzled is incredibly difficult, which is my preferred difficulty for a cooperative game. If you are able to actually win, it feels like a real accomplishment.

The theme is unlike anything else that is out there. While it is heavy and maybe isn’t going to work for everyone, I very much appreciate how the emotional side of war is shown. Even though the mechanics are simple and straightforward, they make sense with the theme and really give The Grizzled a lot of impact and tension.

The Grizzled is a great game that I see myself continuing to get to the table over and over again.

If you’d like to pick up a copy of The Grizzled, you can get it for about $18.

Final Score: 4.5 Stars – A gem of a game that makes its way to my tabletop quite often. Hard to win, but a lot of fun to play.

Misses:
• Theme may not work for everyone