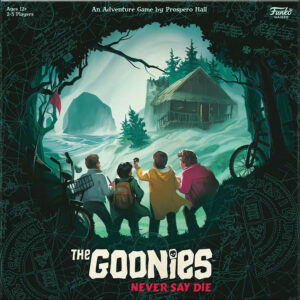 The year was 1980-something. There I sat, dangerously close to a 13-inch television for nearly two hours, fixated by the flickering images of courageous heroes and their daring escapades.

The heroes I watched were brave, but still easily frightened. Smart, but still easily fooled. Rude, but somehow still friendly. I was invested in what I was watching because these heroes reminded me of me. And all I had to do once it was over was wait for the VHS to rewind and I could go on the adventure with those heroes once again.

The movie on my screen was 1985’s The Goonies, one of the many relics from my childhood now being reborn to rake in bundles of nostalgia-fueled cash. This latest form of rebirth is in the new game The Goonies: Never Say Die and from the moment I looked at the cover I was hopeful that playing it would make me feel the same way watching the movie once did.

So, crank up some Cyndi Lauper, rip open a Baby Ruth, and let’s gather around the game table for The Goonies: Never Say Die, designed by the team at Prospero Hall.

The Goonies: Never Say Die is a one-versus-all scenario-driven adventure game in which one side portrays the titular team of preteen treasure hunters. The solo player acts as the “Goondocks Master” (GM) and their role will be to hinder, delay, and ultimately prevent the heroes from achieving the scenario-specific goal.

At the start of the game, the GM will use their secret adventure guide to prepare the board depending on which scenario is being played. Whenever a Goonie enters a room during the game, the GM will have to populate the room with new items to search through or spawn specific enemies. The GM will also reveal secret information only if certain events are triggered by actions the Goonies take. (Succeeding at a type of skill test, for instance.)

The Goonies start each adventure with a basic goal that typically involves finding a specific room or item, but they will have limited information on how to achieve this and not know which direction will lead them to their destination.

During the Goonies turn, each character can take two basic actions. These include moving along a path to an adjacent room, searching a treasure token, attacking an enemy, and certain scenario-specific actions. Most of these basic actions are tied to skill checks which are attempted by rolling dice.

One of the ways the theme is tied into the mechanics is in the distribution of each character’s skills. For example, Sloth is the best at fighting enemies, but not good at dexterity or searching. (Although Sloth did pull off that impressive rope swing in the movie, so I actually think he’s more dexterous than the designers give him credit for.) Mikey, on the other hand, is the best Goonie at searching but very weak in combat.

Upgrading dice is a key function of improving your chances of succeeding at skill checks. Players can spend one wish token to switch out a single die to the next best version. (The wish tokens are styled to look like the coins from the movie that the kids find in the well. -swoon-)

After each Goonie takes their turn, the GM round begins. The GM activates each one of their allies by moving and attacking. Attacks are handled in the same way as Goonie skill checks, and the GM has their own tokens that can upgrade their rolls.

Then, the GM will draw and play cards, most of which involve spawning new enemies or making rooms more hazardous. There are also cards that relate to the specific adventure being played as well as reaction cards that can be played during the Goonies turn if a certain event occurs.

Each adventure has a different win condition for the GM and Goonies, but there is always a timer mechanism that the GM can accelerate to win the game. Many adventures also feature a boss character that the heroes must defeat or outlast. Without spoiling anything specific (and since the miniatures that come with the game aren’t hidden information), the bosses include the Fratellis, a giant octopus, and the ghost of One-Eyed-Willie himself.

For the Goonies, choosing which member of your team to send off alone into potential danger is where much of the game’s tension lies. If a new room shows a few searchable items, it’s best to send Mikey in because he’s the best at searching, but if he gets trapped in there alone with an enemy, he’s in a lot of trouble. (This happened in a game I played where Mikey’s room didn’t even have a proper exit and his team was way on the other side of the board. I actually uttered the words, “Guess I’ll just have to sacrifice Mikey for the good of the team.” It felt like a depressing deleted scene from the movie.)

Being the Goondocks Master has a very different appeal. Aside from the obvious fun that comes with knowing all the map’s secrets, the GM has a straightforward method of impeding the Goonies. It’s not overly complex and even individually triggering your team of bad guys is simple.

The character placards and GM screen do most of the heavy lifting in terms of “frequently asked questions,” but players will need to keep the rulebook handy for the first game or two. It’s not a major problem but it does mean that more experienced gamers will need to be the GM for at least the first few adventures. (I was the GM the first time I played and made a mistake that told the Goonies exactly which room they needed to get to. Mama Fratelli would have made me walk the plank for this blunder.)

One thing that might frustrate gamers is that after a victory it always feels as though it was relatively easy. This holds true regardless of which side you’re playing on. The mechanics of the game are fairly one-note, so the game’s difficulty is dependent on the back-and-forth tension created by the GM’s decisions.

Every adventure we played came down to the wire and victory always could have gone either way, but afterward, there was never a feeling that anything difficult had been achieved. I’m not sure if this is a function or defect of the overall design, but I feel like it’s worth mentioning.

Similarly, the game is also objectively easier with more Goonie players since the GM only gets a single turn after every hero has gone. It’s not necessarily broken, but the game doesn’t scale very well in terms of its difficulty even if the fun remains the same regardless of player count. (The game comes with five playable Goonies but is not meant to played with more than four of them at a time.)

The game comes with nine adventures and technically isn’t a campaign so it can be played in any order by reading flavor text at the start of each game, but the narrative does continue from one adventure to the next. The first three scenarios roughly cover the plot of the movie but after that, it’s all-new content, much of which I hope will make it into a Netflix continuation series at some point. (The Board Game Quest crew and I are available to write and direct this series if needed.)

No matter which side of the game you control, the best part of The Goonies: Never Say Die is easily the way the theme is implemented. Obviously, the specific powers and artwork contribute to that, but I found the light gameplay and pseudo-danger of the secretive GM to underscore exactly the feelings that the movie was meant to evoke.

It also allows the game to stay streamlined and light on rules while still creating the moments of wonder that the movie is most remembered for. It’s not a perfect game—not by a longshot—and many gamers might find it too simplistic or, considering it’s one versus all, not tactical enough.

But if you allow yourself to get swept up in the adventure, then that’s when the game really sings just like a Cyndi Lauper tune blasting overhead as you ride your bike toward Astoria’s shore.

Final Score: 4 Stars – The Goonies: Never Say Die is a light but tense adventure game with great artwork and exceptional theme integration that will surely satisfy people who grew up wishing they could go on a treasure hunt with their favorite group of fictional friends.

Hits:
• Strong theme
• Outstanding artwork
• Straightforward rules (once you get past the first few turns)
• Variety in goals from one adventure to the next
• Good, functional components
• Makes you want to watch the movie

Misses:
• Game mechanisms aren’t particularly dynamic
• Replaying adventures is less interesting with the same group
• Forces you to spend 114 minutes watching a movie after you play it.