We review The Goonies Adventure Card Game, a cooperative hand management game that has players trying to earn treasure to save their beloved family home. The Goonies Card Game seeks to capture that nostalgia feeling by using a movie we love as inspiration. 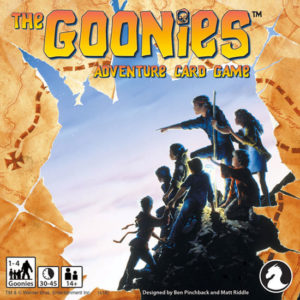 Nostalgia can be a powerful thing and publishers must be realizing that. Lately we have been seeing a resurgence of games based on 80’s IP. Back to the Future, Ghostbusters, Terminator 2, and now The Goonies.

Designed by Ben Pinchback and Matt Riddle (Morocco, Back to the Future Card Game), The Goonies Adventure Card Game (just referred to as The Goonies from here on out) seeks to take players on an adventure in the search for riches to save their family home. Did they succeed? Let’s find out.

The Goonies Adventure Card Game is a cooperative, hand management card game for 1-4 players that takes about 30 minutes to play. The Goonies plays well at all player counts.

As The Goonies is a family weight game, learning to play is fairly easy. Each player will control one of the famous Goonies characters, each of which has 2 special abilities.

The game play of The Goonies is unique in that there are no player turns. The players share a turn and get 4 combined actions during the Team Action Phase. Different actions include:

Players win when they’ve found all 5 treasures and stored them on mapped paths. They lose if a 5th obstacle is at any location, a 5th Fratelli card is out, or if the encounter deck runs out.

Licensed board games are a tricky bunch. A designer has to carefully walk the line of embracing the source material without using it as a gimmick to sell the game. Unfortunately, The Goonies falls into the second half of this spectrum. While I was really hoping for a Goonies themed adventure, the theme is this one feels pretty pasted on. In fact, it reminded me of another Pinchback/Riddle design, the Back to the Future Card Game, which suffered from the same issue. Neither really embraced the source material other than on the surface.

That doesn’t mean that The Goonies is a bad game. Although the game definitely has some quirks, it’s probably going to limit its appeal. The main issue with The Goonies is just how random it feels. You will be at the mercy of the cards you draw and it feels almost reactionary for how you use them. Your actions will be dictated based on the cards in hand, with only a few characters giving you some way to get around that.

To compound on that, players can lose a game unexpectedly when drawing obstacles at the end of the round. Since you can have repeated obstacles added when the chevron symbol pops up, it’s very possible to draw 2-3 cards in a row and suddenly have 5 at a location, losing you the game. This random loss definitely isn’t very satisfying.

One of the nice things about The Goonies is that, once you get good at it, the game gives you ways to ramp up the difficulty with the inclusion of the challenge cards. These will alter the rules slightly; letting players who want to make things harder have a way to turn up the heat.

Finally, I did like how the action phase works. Instead of having individual player turns, there is one set of group actions. This not only forces the players to work together, but it makes more sense thematically. The Goonies are a group and rarely were they apart in the movie. I enjoyed how unique this phase felt (compared to other coop games) and the cooperation it required. Granted this does have the side effect of allowing the alpha player to dominate the game, but my preferred solution has always just been to not play with those people. Problem solved.

While The Goonies movie is still loved to this day, I don’t think the adventure card game is going to stick around nearly as long. It just relies a little too much on the source material to sell copies, yet it doesn’t back that up in the game play. If you remove the theme (which would be easy to do), then you’d have an OK, but eminently forgettable card game.

However, The Goonies Adventure Card Game does have some unique aspects going for it, and the theme will definitely tap into the nostalgia center of your brain (even if I do abhor photos in my games). If you are a fan of the series, and can deal with the randomness, it may be worth a look.

Final Score: 2.5 Stars – While the game introduces some unique mechanics, I never really felt like I was on an adventure with The Goonies.

Misses:
• Game is way too random
• Theme is pasted on