Home Game Previews The Girl and the Robot Preview 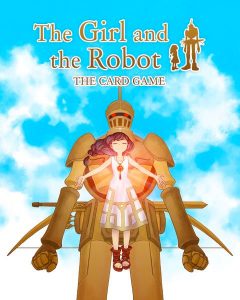 A Girl is captured and kept in a castle by the Evil Queen. In an attempt to escape, the Girl, possessing an enchanted pendant, finds she is able to control a Robot, who she befriends to help her. Will the Girl manage to survive the Evil Queen, or will the Queen keep her captive?

Based on the video game of the same name, The Girl and the Robot from Flying Carpets is a 2-4 player card-based strategy game that takes 30-45 minutes.

The objective of the game is to outlast your opponent by not drawing a Demon card; drawing one spells elimination. But hope isn’t lost if this comes to pass. Playing weapons, actions and using unique character abilities allow players to defend or avert this elimination. Whether you’re playing against a single opponent or on a team, you’ll need to be strategic.

On a player’s turn, they can play any number of cards from their hand. Once they’re finished, they draw a card and play passes to the next person. Throughout the game, players will have opportunities to manipulate the draw deck and affect their opponent’s turn to stifle any strategies or advantages they may be working toward. And if push comes to shove, a good old fashioned weapon can help fight off any demons that might show their faces by returning them to the deck. But weapons are scarce so you’ll have to play smart.

The Girl and the Robot offers various combinations for a unique play experience and I think that makes it appealing to people who have access to different playgroup sizes. Players can enjoy 1 vs 1, 1 vs 2 or 2 vs 2 games. What helps scale these variations on player count is the unique character abilities, which change depending on whether the player is alone or on a team. That little difference, while still maintaining the core game, is going to require players to use different strategies for victory.

I found myself in certain moments during games wanting to play my cards conservatively and other times taking a gamble, hoping I was setting myself up. It’s something that you’ll have to consider since it takes time to build a hand back up and strategies will be very limited if you’re only holding on to one or two cards each turn, or if you’ve been unlucky enough to get bad card draws.

I played some Magic the Gathering back in the day (read: before children and when money was no object), so I was interested to go through the deck and see how many copies of certain cards there were. This, of course, gives you an idea of how often a card might come out in games. Some cards have 4 copies, while others might only have one. But the biggest thing I discovered is that weapons will not be your primary means of defense. Even though everyone starts with a basic sword, it’s going to be rare to see one. Knowing this, playing action cards and smartly using those ability points is going to be your key to victory.

If you’re a fan of card games as I am, then I think The Girl and the Robot is worth considering adding to your collection. With modest rules but strategic play variability, this is an easy game to learn and teach but will offer a little more depth than some other comparable card games.

The Girl and the Robot is now in funding on Kickstarter. If you are interested in getting a copy or want to find out more, head over to their campaign page for details.