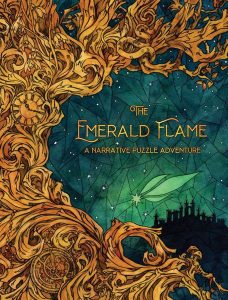 “Greetings, My name is Jules Remond, and as head of the Koschei Society of scholar, I write to you today to formally petition for your assistance with a matter of great import…”

The first game we reviewed from PostCurious was their excellent puzzle-solving game, The Tale of Ord. If you were a fan of that one, they have returned to episodic puzzle games, with another deeply thematic game, this time engaging you on a twisty, clever, puzzle-filled hunt for—well, you’ll just have to find out…

The Emerald Flame is a cooperative puzzle adventure game for 1-4 players in three parts. In it, you’re tasked by the mysterious Koschei Society to help discover the clues that will lead to a famed elixir. The total playtime is about 6-9 hours, but the episodic nature of the chapters (separate envelopes contained group puzzles to solve) allows you and your group to tackle it all in one go, or in stages if you are short on time.

Each episode contains a number of clues to help you unravel a piece of the overall mystery. Puzzles chain into each other and include twisty logic challenges, elaborate code-breaking, identification of foreign objects, botanists samples and symbology, and require completing fiendishly clever challenges.

A QR code provided with the instructions leads to a series of several hints for each stage and puzzle, allowing you to advance just a tick if you get stuck, but not so much that the answer seems to have been handed to you. Each chapter contains a few hours of gameplay and has its own conclusion (so you won’t feel like you’ve stopped abruptly if your group needs to take a break). However, the overall story develops over the course of the entire game.

It’s no secret that I loved The Tale of Ord, it’s my only 5-star rating on the site. I was excited to get a sneak peek at The Emerald Flame and I’m not disappointed. Those that played the first game (they’re unrelated) may recognize the structure of a few puzzles, but once again Post Curious has put together a wildly unique experience. You’ll never know what to expect, and no puzzle is exactly what it seems. Once again, there were several times my partner and I thought we’d clicked on to a final answer, only to find another branch to the rabbit hole.

Naturally, there are some things that will be very familiar to those that regularly play these type games—code-breaking, identification, etc—but some puzzles are so elaborate or devious you’ll start thinking EVERYTHING might be a clue (we kept one envelope open for an entire chapter because we noticed an unusual blemish on the interior and we were both convinced it might be A CLUE at some stage. And maybe it was—you’ll have to play to see.

The chapters contain more than paper clues to use and manipulate as well. There is jewelry, specimen slides, spinning decoder circles, and many tactile, three-dimensional pieces to examine. While poring through the clues in a note or decoding a paper chart may feel like you’re an amateur detective, the additional, beautiful components heighten the experience, turning everyone into a professional sleuth.

PostCurious continues to nail puzzle games, creating a twisty, clever adventure that will entertain for hours. The Emerald Flame launches today on Kickstarter, so head over to their campaign page for more information, or to become a backer. I’ll be a day one backer for sure!