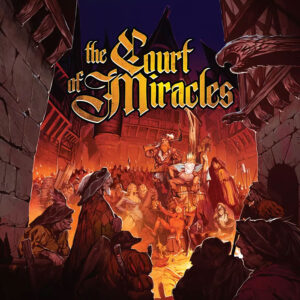 Let’s go way back to 16th Century Paris. You’re the leader of a guild of beggars and thieves. Your goal is to become the new King of Beggars. Unfortunately for you, 2-4 other guilds will be competing with you. Scheming, stealing, and opportunism will be rewarded. The theme kind of takes a back seat otherwise.

The Court of Miracles is a 2-5 player worker placement game with strong interaction and combat elements. It plays in about 30-45 minutes.

In the Court of Miracles, players are competing to be the first to get all of their six renowned tokens onto the board. These tokens can be placed by either winning control of a neighborhood via standoff (combat) or purchasing a permanent spot at the Renown Square.

On a player’s turn, they will place one of their rogue tokens (workers) face-down on a spot on the board and take the corresponding reward. Then, they may choose to take the neighborhood action associated with the region they are placed in. The individual worker placement spots may provide a coin (or two), a plot card, or it may move the Penniless King token forward on its track. I’ll explain that more in a moment. The neighborhood actions range from moving other player’s rogue tokens to taking extra coins/cards to purchasing a permanent spot on the board for one of your renowned tokens.

Standoffs are resolved by simply flipping over all rogue tokens in a specific neighborhood and comparing the total strength of each guild’s units. The highest strength wins with ties being broken by placement position. The winner of the standoff takes control of the neighborhood by placing their renown token after which all rogue tokens go back to their owners. Furthermore, whoever controls a neighborhood will get paid any time someone uses that neighborhood’s action.

Plot cards can be gained throughout the game in various ways. These cards give you new ways to steal coins, move rogue tokens, and do other nefarious things. You can also gain new and unique rogue tokens throughout the game. Some of these give you more strength in a stand-off, allow you to steal coins/draw a card, or even displace other players’ renown tokens on the board.

I have a mixed history with worker placement games. A lot of the standard style worker placement games don’t do much for me. They generally lack the right kind of interaction to be engaging enough. The Court of Miracles is more up my alley. It’s much less of a solitaire optimization puzzle with incidental blocking and more of an in-your-face, play the other players type of game. What rewards you place for are often secondary to the exact position you place your token in. Tactical placement is key as well as choosing the correct rogue token to place in each spot.

There is a ton of intrigue in this game. It’s very tactical with lots of tough decisions throughout. You really have to balance keeping your renown tokens on the board, earning coins, and preventing other players from steamrolling the game. If a player is left unchecked, they will run away with it. In that regard, it reminds me of some recently popular games such as Root and Inis.

The good news is, it is pretty easy to take things from other players. If you focus too much on that, of course, you won’t have enough time to advance your own agenda. All of this balancing creates a juicy tension throughout the game. When everyone is playing to win, it feels like a wonderfully mad rush with no lack of bloodshed along the way.

Then it’s over. You’re left with a bit of whiplash as the ending can hit rather abruptly. “Wait. How did you…” and some shocked faces are left around the table. It’s not because there was no way to see it coming. It’s more that you were so busy trying to balance everything that they just managed to eek the win out from under your nose. This generally means they schemed and maneuvered the best, managed their resources well, and outsmarted the table. The last few rounds usually include some plotting and temporary alliances that are formed in order to stop the leader from winning. Sometimes, it’s already too late, but it’s not obvious until the game reaches its end. Surprisingly, the game doesn’t go back and forth, dragging on and on due to this bash the leader nature. I feel that it ends at just the right time, leaving you wishing you could have done a bit more.

That being said, I do have a strong suspicion that in some games the cards had a very strong impact on the outcomes. The cards are largely based on timing. Some work best if you’re low on coins for instance. Others can work best if you have a board position that you need to protect. They are all quite situational though and some are clearly a bit stronger than others. This can be looked at in two ways. One: stockpiling cards is a strong strategy because you are more likely to have what you need when you need it… Or two: a single lucky card draw can change the game dynamics in a way that is unfair. I’m kind of on the fence with this one. It has not deterred me from wanting to play the game more… yet.

From play to play, variability comes from what the other players do. I can see the game getting stale after a bunch of plays with the same group. Add one new player into the mix and everything feels fresh again. The board won’t change and the goal won’t change, but you’ll have to plan and scheme in new ways to react to someone else’s playstyle. I really enjoy that aspect. This also means the game works better with higher player counts.

One final thing worth mentioning are the components. The player boards, tokens, cards, etc… are fine. The component issues this game has are the board and the box insert. The box insert seems well organized at first glance, but it’s really not convenient for game set-up and the components are often spilled throughout the box upon re-opening the game. In addition, the board is so oddly shaped. The production design is trying to be too clever, and the result is a board that has edges that will bend and fray every time you move the box. I just don’t get it.

At the end of the day, we’re talking about a 30-45 minute game that is always enjoyable along the way. It would be difficult to look past the cards for a longer, more involved bout. The Court of Miracles does not ask for a lot from the players in terms of time and rules overhead, but it does provide a solid amount of decision-making and fun. The Court of Miracles is a wild ride and one I would pull out in a variety of situations. Best laid plans can be interrupted. Cards can add some swinginess, but you also have to earn them.

Final Score: 4 Stars – a quick, tactical, and interactive worker placement game with plenty of scheming and bash the leader, making for a nail-biting finish.