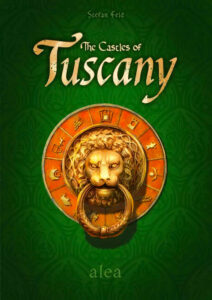 The Castles of Tuscany is a set collection and tile-laying game for 2-4 players that takes about 45-60 minutes to play.

Alright, here’s a little more detail for you demanding readers. Taking place over three rounds, players want to build their region of Tuscany with all the things a burgeoning community needs, like villages and cities, inns, wagons (?), quarries (??), and forts. On their turn, a player can take one of three actions. A player can take a tile from a pool of available tiles to their holding area, can draw region cards which are used when a player elects to play a tile to their region.

In order to play the tile from their holding area to their region, a player must discard two region cards that match the type of tile they wish to play. A variety of effects can occur after playing a tile, such as drawing extra region cards, receiving bonus resources and points, and acquiring marble and workers, which can be used for bonus actions and reduce card costs. Players also can score points by completing contiguous regions of tiles, or by being the first player to play all the tiles of a particular region.

Each round end is triggered by exhausting the stack of tiles for that round, which are used to replace tiles taken. There are two scoring tracks—green and red—with the score on the green track added to the score on the red track at the end of each round. At the end of three rounds, whoever has the greatest total number of points is declared the winner.

Let us get the obvious out of the way: The Castles of Tuscany is not a sequel to Castles of Burgundy, nor should it really be considered a successor. The similarities between them definitely abound, with the two-step process to place tiles, the various effects of tile placement, and the various ways to score points. Many of the core mechanics will be accessible and familiar to any veteran player of Burgundy.

This is where the comparisons should end, as they are two different games with two very different styles and feel of gameplay, despite their shared mechanical lineage. The Castles of Tuscany presents players with a straightforward and limited set of choices every turn in terms of their action choices. While there are possibilities to repeat or chain actions together (using quarries or tile powers) there is not a tremendous layer of strategic depth to The Castles of Tuscany—it provides players with a very straightforward path of action.

The fact that there are not many action options does not mean that The Castles of Tuscany is devoid of options for strategy. There are plenty of paths players can attempt to take towards victory, with none, in particular, seeming to have any clear advantage over the other. If anything, the main strategy for success seems to be to figure out what your opponents are attempting to do and choosing to take another path. This assertion is backed up by the fact that most of our plays ended up with very close final scores, with no one strategy emerging as a requisite for victory.

All of this comes together to create a game that ends up being little more than a race to the finish line, with players grabbing points from wherever they can along the way. This should not be regarded as a negative—The Castles of Tuscany is very unapologetic and upfront about what kind of game it is. It provides a lighter Feld experience to players, and players who are familiar with his games will get that same feel from a game that is easier to learn and faster to play. It can also serve as an introductory game for players new to Feld’s designs before diving into some of his more complex offerings.

The Castles of Tuscany is a lighter offering that provides familiar mechanics and feel to fans of Stefan Feld’s designs. Fast to learn, but with enough complexity to please experienced gamers, it provides a pleasant gaming experience as players race to build their regions up from nothing to become the jewel of Tuscany. Just do your best to avoid comparing it to The Castles of Burgundy—they are two different games that scratch two different gaming itches, both effectively.

Final Score: 4 Stars – The Castles of Tuscany does not break any new ground, but rather sits back and enjoys the established landscape.

Hits:
• Familiar mechanics that are quick to pick up
• Plays quickly for a Feld-designed game
• Many choices of strategy on the path to victory

Misses:
• Game feels like a race to the finish
• Action selection is very limited