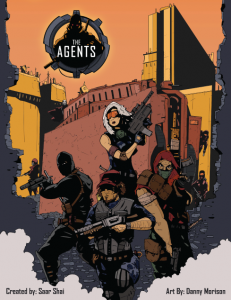 James Bond, Chuck Bartowski, Jason Bourne…what do they all have in common? They are secret agents of course! The new game, The Agents, tasks you with running your own team of secret agents. Players must recruit agents and complete missions to score points in their quest towards victory. Each Agent will have the ability to give you victory points or allow you to use their special power. Choose wisely though, for whichever option you decline, your opponent will benefit from.
The Agents is a card game for 3-5 players that plays in about 30-45 minutes. The Agents plays best with any number of people.

The Agents has players forming factions of Agents to carry out their missions and score them victory points. On a players turn, they will play, recruit and command their agents as they try and be the first player to 40 victory points. Agent cards are played in a line between you and the players to your left and right and both players can manipulate the faction line. One of the fantastic things about each of the agents cards is that they are dual sided. So each agent played will help both you and your opponent. The hard part is deciding who gets what bonus! The rules are easy to learn and the scaling works very well from 2-5 players.

As stated earlier, the game is played by building factions of agents between you and another player. Each player will have 2 factions, one to their left and one to their right. Much like in 7 Wonders, you won’t have any interaction with a player not directly sitting next to you. In a 2 player game, both factions are shared between the 2 players.

Each agent card has two halves, the arrow half and the command half. Which ever side you choose to play facing yourself, you get the benefit of. Want victory points? Play the arrow half. Want to use the agent’s special power? Take the command half.
Rounds proceed in a clockwise fashion with each player getting 2 actions to take on their turn. Possible actions include:
1. Play an Agent – Take an agent from your hand and play it to a faction. If they arrow side is facing you, you will collect victory points. If the command side is facing you, you execute the action. Your opponent will benefit from whichever side you don’t choose, so if you choose the arrow half, your opponent will immediately execute the agent’s action.
2. Re-activate a command – Pick an agent in one of your factions and use its command again.
3. Buy an Agent or Mission – This is how you draw more agents or mission cards. You must spend victory points to draw any cards.
4. Switch a Mission – If you don’t like a mission card you’ve played to a faction, this is an alternate way to get you a new one. 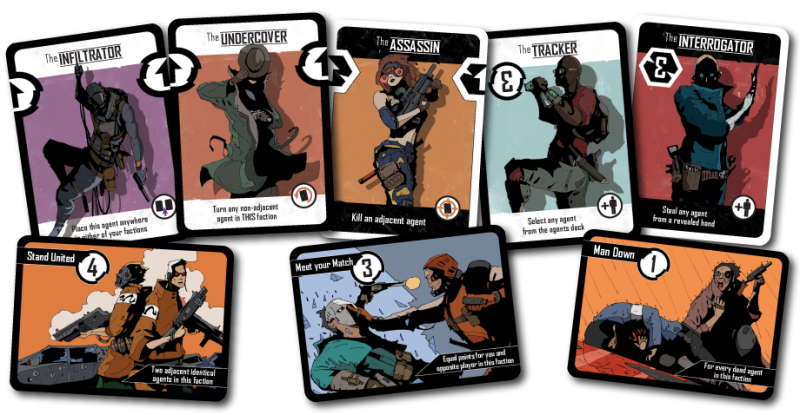 A few things about The Agents. One, it’s awesome and you should go back it. Seriously, I really like this game. OK, you probably want to know why first. Fair enough.
First, The Agents scales really well. We’ve tried it with 2, 3, and 4 players and it works fantastic with any of those numbers. Because of the nature of the faction lines, a player will always have 2 factions to work with. If you are in a two player game, you have two factions between you and your opponent. If there are more players, then you will have a faction between you and the players on the left and right of you (think 7 Wonders military conflict resolution). Either way you will have 2 factions to work with. Other than a bit more down time as you get into the 5 player range, the game scales perfectly.

Second, I like the hard decisions that have to be made in the game. Every time I play an agent, I have to think hard if I want to give my opponent the victory points or the command. Some of those command powers are really good so it’s painful to give those to your opponent. But you have to do that sometimes to ensure you have a steady stream of victory points (and income). These decisions help to keep the tension during the game as players inch closer to the 40 victory point range.

Speaking of victory points, it was an interesting choice that your VPs are also your currency. Eventually you will have to recruit more agents and missions. To do that you have to spend your hard won VPs. It’s a fun little give-and-take in the game that I really enjoy. This adds another layer of complexity as players must decide if that new card is worth spending some VPs, especially when they are close to winning.

The Agents has a lot of tactical decision making that I don’t usually find in a card game. You will have a hand of cards and a lot of choices to make with those cards. You and your opponents will be manipulating the same faction lines and it’s very likely that your carefully laid out plans will be undone by your opponent countering your moves. If this type of tactical strategy game appeals to you then you will love The Agents.

I should also mention the artwork on the cards. While I was giving a prototype copy without the final artwork, personally I like the direction it is going. It reminded me of a cell shading or noir style of artwork, which really appeals to me. While everyone might not be the biggest fan of the artwork style, I think it’s a great choice. It’s different and has almost a comic book feel to it. I think it fits the game really well.

Overall The Agents features some easy to learn rules, a decently quick play time and some tough decision making. While The Agents isn’t the deepest game you’ve every played, it is a whole lot of fun. Many card games will fall into the filler category but I think The Agents surpasses that into the full game realm. The depth of strategy in the game means you will be thinking about what to play on your turn and planning multiple turns in advance. Even still, The Agents’ rules should make it accessible to both gamers and non-gamers alike, which should help it get to your playing table more often. For a card game The Agents hits all the right points.

If you are interested in checking it out, it’s currently in funding on Kickstarter and scheduled for delivery to backers in November of 2013. A pledge of $18 will get you a copy of the game and all stretch goals. You have until Sunday, August 25th to become a backer so head over today.