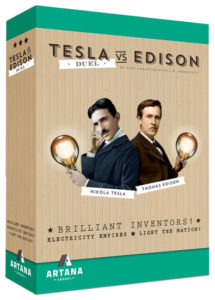 Two player versions of complex Euro games are gaining momentum fast. It’s hard to browse through the BoardGameGeek forums for any challenging game without someone asking about the two-player experience (and solo gamers, we need to talk). Many publishers have sought to answer those queries with entirely new games similar to Agricola: All Creatures Big and Small; a dedicated, smaller two player version of Agricola. Artana Games current Kickstarter is just such an affair.

Tesla vs Edison: Duel is an action selection card game for 2 players that takes about 20-30 minutes to play.

Players in Tesla vs Edison: Duel take on the role of rival inventors trying to spread the gospel of alternating or direct current. In the game, each player plays projects and takes control of companies via a shared collection across three regions of the United States. What develops is card play with area control where the player with greater area strength claims the spoils. Players can win instantly or by accumulating points after three rounds.

Setup for Tesla vs Edison: Duel starts with three region cards: New York, New England and Out West. These reflect the three different areas of the country focused on during the rapid expansion of electricity service in the late 1800s and early 20th century.

Each player starts with 5 share cards in one of the regions. There are additional stock companies which also align each with one of these. On the opposite side of the play area are electricity projects for various cities, each one located in one of the regions as well. Throughout the game, these cards can be played to the indicated region to help that player gain more influence and thus gain that region’s award.

Another metric that is tracked is each player’s PR rating. A separate board with tokens keeps score for which inventor is more praiseworthy in the public eye.

Turn by turn play is comprised of a series of rounds in which players acquire and play a hand of three Assistant cards. On a turn, a player chooses one card to play and takes the actions listed on the card. Each card offers two different actions from among the following:

Free actions are also available from the share cards which were setup in the regions at the beginning. These cards allow players to decrease their control in the region while possibly gaining advantage from using the free action elsewhere.

At the end of a round, the player who has the higher value of points on their side of a region card wins the reward for the region. Project cards count for fixed points while stocks have a variable scale based on the number played.

The game ends after three rounds unless a player has managed to complete their instant win condition.

Readers who have read my review of 7 Wonders: Duel know that I love the emergent play and brinksmanship therein. I’m happy to say that Tesla vs Edison: Duel operates on the same wavelength. The development of the regions with stocks and projects feels competitive and definitely requires attention to the path an opponent is taking.

This is what makes the game especially engaging. Usually, area control with majorities for two players can get a little punchy. In this case, the game offers many avenues to shut down opponents options, and the beauty of a chess match is what comes to the forefront.

The other main thing that will keep me coming back time and again are the variables provided. They really change the overall feel of the game. The instant win conditions for the various inventors has the same feel as a 7 Wonders: Duel Science or Military victory, but since these are different (on average) every game, there’s a huge amount of variety. As expected, all these variables provide lots of replay value.

Since this is a card game, Artana assured me that they only use the highest quality cards similar to their production of Tesla vs Edison. They should hold up to multiple play sessions fairly well. Artana also made the right decision that cards held in hand (Assistant cards) are the standard card game size cards instead of the mini size that some games have produced lately.

The biggest negative for me is a truly subjective factor. I’m not a fan of the art. It definitely goes with the theme and has a truly distinctive style, but the flat pastels and the polished, almost photographic, quality to the characters isn’t grabbing me. The graphic design and the icons, however, are well done. Even so, they have assured me that there will be plenty of reference information on various components for the game.

Without experience with Tesla vs Edison, I can’t comment on how similar Tesla vs Edison: Duel is to the larger game. It plays quickly with multiple choices similar to a true lunge-parry-riposte fencing match. There is some randomness with the options a player receives every turn, but the mitigation with free actions and the large number of cards does help.

If this sounds like the kind of affair you’re looking for, the Kickstarter ends Tuesday. The game has funded well past the goal, so gamers are likely to get better bang for their buck with some nice stretch goals.

If you’d like to become a backer, or find out more information, head over to their campaign page for more details and pledge levels.