We review Terrible Monster, a 2 player micro game published by Sweet Lemon Games. Terrible Monsters seeks to distill the Magic: The Gathering experience down to a quick, ten minute game. 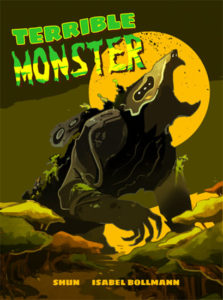 Games that want to advertise themselves as being like Magic seem to be quite common. There is a high interest in games that have the same strategy or feel, but at half the time and/or money investment. Whether the game also brings a somewhat interesting theme is also to be considered.

The micro-game format, energized in recent years by Love Letter, is a hard nut to crack. Card games often work well in this scale due to the multiple ways to challenge players from card game rules. Terrible Monster, a Kickstarter title from Sweet Lemon publishing, is hoping they’re not too late to the game. This was a title that was web published and then brought to a larger audience through crowdfunding. It’s a two-player dueling game that plays in 15 min with a 1950s pulp monster theme.

The structure of play for Terrible Monster is amazingly and appreciably simple. Players deal 5 cards each from a deck. The first player may play 1 card. The second and subsequent turns have players drawing 1 card and playing up to 2 cards.

Any monster cards played stay in play. These usually have some ongoing effect like dealing damage to the opponent. Any “spell” cards played take effect and are put in the discard pile. Most of the spell cards feature ways to find cards or cycle cards. This is useful as each player seeks to find just the right combo of abilities to win.

Players are aiming to reduce their opponent’s life points (tracked with tokens) from 4 to 0 to win. Players also have 2 counter(spell) tokens. To counter a played card, a player simply uses 1 token. To counter a counter, a player must use 2 tokens.

Another way to win involves the Terrible Monster card. At the beginning of a player’s turn, if they have the Terrible Monster card in play, they deal 4 damage to their opponent, winning instantly. As such, if a player can get the monster out by playing the right combo (the only way to correctly play it), they’ll win on their next turn unless the opponent has just the right combo as well.

There is going to be a certain set of the gaming audience that will look at this title as derivative and a waste of time. This reviewer feels that is woefully far from accurate. There is a fun, challenging, and aggressive game here that distills down a Magic: The Gathering game into 15 minutes. Played successively while waiting in between larger games, it’s a gem.

That isn’t to say that the inherent randomness of some of the play won’t turn some people off. If gamers are already inclined to dislike card games with randomness, nothing here will change their minds. However, it has exactly the right amount of card manipulation and chance mitigation to make randomness something to overcome. That in itself is interesting since such a small game has only a limited set of strategies.

Finally, huge appreciation must be given to the theme. Even though the theme was applied after the game was picked up from the self-published rules from the designer, the theme is implemented perfectly. It really makes players want to know what the full story was with the monster as each card feels like a snippet from the larger movie. The art aids that immensely with a perfect 1950s comic book/horror vibe.

Since this was a Kickstarter, the included “Desperation” expansion adds a new dynamic that’s very interesting. Besides new cards for the deck, asymmetric player power cards are provided as well. These feel appropriately balanced and a lot of fun to explore.

At less than $20, Terrible Monster is a good buy. It’s got some meat for repeated play and a dueling style of play familiar to Magic: The Gathering in a minute amount of time. This formula makes it an easy game to bring to multiple gaming events and quickly teach for moments in between games. This is a big surprise given how skeptical this reviewer usually is of games that play “like Magic”.

Final Score: 4 Stars – Feels like micro Magic the Gathering mixed with a bit of Love Letter. Add a really superb theme and it’s got the makings of an always-in-the-bag filler game.