We review Techlandia, a dungeon crawler board game that mashes up a tech company and some Lovecraftian mythos. With some tongue and cheek humor, Techlandia seeks inspiration from the big tech companies on the west coast. 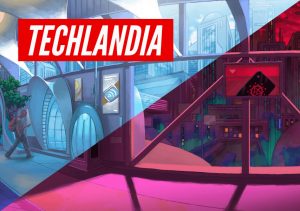 “Silicon Valley meets Lovecraft” is definitely the tagline that hooked me into trying out Techlandia. After living and working in the San Francisco Bay Area for almost eight years now, I knew that I not only had the personal experience of the tech spaces but also the appreciation for horror to give this game a proper review.

Techlandia is a dungeon crawler for 1-4 players that takes about 90 minutes to play. The best experience is with maximum player count for maximum doom.

The game takes place inside of the headquarters for the Techlandia corporation, which is another tech giant among giants. You, a tech blogger, haven’t been officially invited to their latest launch event so you are entering at your own risk!

Setup for the game is straightforward, with only eight hex tiles to represent the map and decks of Gear cards, Encounter cards, Investigation cards, and Enemy cards placed nearby. The timer for the game is known as the Doomsday Clock, which comes with its own deck to be interacted with at specific checkpoints throughout the game.

Players start with five Gear cards from the deck and can be public information at the player’s discretion. These cards are useful for buffs to specific actions or to completely negate certain events. Each player also starts with a smartphone-shaped player mat known as a “Dashboard” that tracks QR code fragments, decryption codes, number of rooms investigated, hits to objectivity, and silly skills like Spyware, Disinfo, and Memes.

The object of the game is to gain entry to the invite-only Techlandia TX-1 smartphone unveiling in order to get some answers on mysterious disappearances surrounding the company. This is done by investigating the rooms for clues and eventually providing security with the proper QR code to get to the elevator.

A player’s turn consists of taking up to two actions, which can include moving, investigating, picking up a QR code, fighting enemies, reloading gear, or submitting a QR code to security. Some rooms have security and are more difficult to investigate. When investigating, your fate is determined by the Investigation cards (which can be a success or a failure result) from the respective deck. Depending on what happens, they can trigger the reveal of Encounter cards that usually come with a negative effect or loss to the player.

Like you would expect in a dungeon crawler, there are enemy encounters with “Tech cultists” that have varying degrees of difficulty to beat. The silly skills I mentioned earlier can come into play during combat with these enemies to give a +1 to the roll. Winning fights produce one Decryption code which are like lifelines for the QR code mission. However, losing fights impacts the player’s Objectivity. Three hits to this lead to a state of being called “Fanboy status” which turns the player temporarily against the others. If you and/or the other bloggers cannot make it to the unveiling before the Doomsday Clock hits 0, the game ends and everyone loses.

The hack and slash nature of dungeon crawlers never really appealed to me because of the time investment and the mechanical rinse-and-repeat feel of combat. However, this game condenses what I like most about adventures of this style and doesn’t leave me with the usual feelings of regret or time wasted.

Having the map limited to only eight tiles makes the logistics puzzle of surviving as a player and supporting other players as a team much easier to plan. Some of the main pain points of heavier dungeon crawlers come from the incessant arguing or bickering between players, so reducing the scope of what to discuss helps with the total game time. The streamlining didn’t stop at the map; they reduced combat to one die roll and movement was straightforward. This is an important thing to keep in mind when assessing possible loss during the game because you didn’t spend that much time strategizing so it isn’t as painful.

All the cards had flavor text that gave me a good chuckle because they made references to experiences that do commonly happen at tech companies. From dealing with smelly people to jumping on social media drills, the encounters have a wide range of familiar inconveniences to reminisce. Having the final win condition involve QR code technology (i.e. you need a QR reader) was also a nice touch for a game with a tech backdrop and provided a bit of suspense after all the room exploration and fights.

Despite the quirky nature of this game, once you play enough times, there is a good chance that you will see all the available cards and experience all the moments available to you. From there, the game doesn’t offer much replay value outside of trying to make the scenario harder or play variants that they include in the rulebook. The use of Lovecraft cosmic horror was very minimal throughout the game and didn’t really shine through like the box description suggested it would.

I do want to point out that there is a tad bit of exclusivity in the language of the rulebook and the enemies. While it is true that there is a disappointing lack of women in tech industries—for various systemic reasons we won’t be getting into here—it did not need to be in any part of this game to have a backdrop in Silicon Valley. “Fanboy status” could have just been left at “Fan status”, because idolizing and blindly following figureheads is not a behavior exclusive to men. None of the enemies in suits—who I am assuming are executive heads of departments—are women.

Techlandia is for those who want to get a taste of a dungeon crawler without the rulebook investment and quite possibly for those who want to toy with the idea of sneaking into a big tech company. Due to the simplistic nature of combat and movement, game time is true to the box and therefore makes it more accessible to those who may not have all day or night to play games. Unfortunately, because the design is simple it also means that the experience is limited and replay value is not guaranteed. While there are some references and hints of Lovecraft lore in the game, they did not significantly impact gameplay or game experience.

Final Score: 2.5 Stars – Explore and uncover the mysteries of the Techlandia corporation in this adventure game that combines Silicon Valley culture with Lovecraftian monsters.

Hits:
• Satisfies dungeon-crawling needs
• Riddled with references to tech culture
• Easy to get started and play