We review Targi, a two player board game published by Thames and Kosmos. Targi is a set collection and worker placement game that will have players trying to score points by collecting goods and cards. 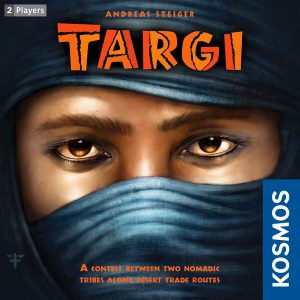 For centuries the Tuareg have traded across the Sahara, spreading culture, religion, and goods throughout northern Africa. As the leader of a Taureg tribe, you are responsible for expanding your entire clan’s prosperity. Trade with others and increase your tribe’s status while remaining as mobile as the shifting dunes. The desert can be a dangerous place, but the real competition will be from other Targi, all hoping to advance their own clans.

Targi is a worker placement and set collection game for two players.

The Targi playing surface is based on a 5×5 grid. The outside is a boarder of 16 action cards that will remain the same throughout the games. Tribe and goods cards are dealt into the center each round of the game. Players will take turns placing meeples on the action cards at the edges of the board, neither sharing a card nor placing a meeple directly across from another. Once meeples are placed, the action cards that meeples are on will trigger and the effect is resolved. Then the interior cards that are at the spot where a meeple’s row and column intersect are collected by each player.

As cards are collected, they may be immediately spent or added to an individual player’s display tableau for end game scoring. These cannot be moved once placed (barring some special card rules). Tableau scoring is based not just on VPs on the card but the combinations per row – all the same, or all different. A robber will move around the board blocking a different action each turn as well.

Play ends when a player paces their twelfth tribe card or if the robber reaches the 4th raid. Scoring is done by adding the number of direct VPs, card text, and bonuses in each player’s tableau. The player with the most points wins.

A close friend of mine has been talking Targi up for MONTHS so I had to get my hands on a copy. And she was entirely right—it’s a fantastic, strategic game for two.

The card art in Targi is evocative of the theme, with shiny dates, hairy camels, and sandy dunes. I did find myself hoping the play would be a little more thematic. Set up is a snap, and the redistribution of the inner tableau each game allows for variety. The font on the cards could be a hair wider to improve readability, but all symbols are clear from a distance.

Simple moves have a purpose. From the placement of your first meeple, you’ll need to be concocting a strategy for tribal card collection. And placement—one wrong card play in your own scoring grid can mean the difference of several points and enough swing to change the outcome of the game.

The competition is very direct in Targi. During the worker placement phase, you’re directly competing not just for action spaces but for the resource and tribe cards in the interior of the grid. If you play with a table flipper they may need a chill pill, because staying out of each other’s way is impossible. For a number of your moves you may have to choose between taking your big advantage or deliberately interrupting your opponent.

The rulebook is concise but clear, with a great turn sequence walkthrough as well as pictures to illustrate the card grids. Alternating card distribution and limiting hand size prevents card hogging. And there are two tiebreakers, preventing the dreaded ‘both players are winner’ which wouldn’t fit this competitive game at all.

Targi is a fantastic strategy worker placement game. There are no wasted turns or waiting around, each move needs to be optimized to score big. Variability through set up helps give the game a lot of replay value as no two games are the same. While Targi does use symbols, they are easy to interpret. Targi is highly competitive with just enough thematic art for you to feel the hot desert wind at your back.

Final Score: 4.5 Stars – A fiercely competitive worker placement with lots of strategy. Clear symbology is easy to read and a very well laid out rulebook makes learning a breeze.

Hits:
• Lots of strategies available and slightly different every play
• Directly competitive two player—this is for players who like winning
• Clear symbols and well put together rulebook

Misses:
• Card font could use some help with legibility.