We review Tammany, a light auction and take that card game published Copper Jungle Games. Tammany can be considered a lighter and quicker playing version of the popular board game Tammany Hall. 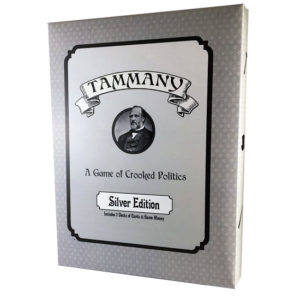 The politics in old New York were not pretty. Bribery, gerrymandering, and the coercion of votes by unions and ethnic groups was the name of the game. All in all, it’s pretty ripe for board game material. For those who are uninterested in the negotiation aspects of the longer board game Tammany Hall, Copper Jungle Games has a quick and light alternative currently publishing on The Game Crafter.

Tammany is an auction card game for 2-4 players. It takes about an hour to play and plays best with 4 players.

Tammany is, at its core, an auction game. Starting with five action cards in hand and $10,000, players will be bidding to gain control of Crony cards: businesses, unions, and the mob. The main goal is to earn enough votes provided by unions, but along the way, businesses and the mob can be useful in gaining money for auctions or strong-arming opponents. The end of the game comes when one player has a certain total of votes.

Each turn, players begin by drawing an Action card. The player can then play one card from their hand. Most cards depend on the player meeting a certain required number of unions, businesses or mob cards. Business cards will generate income for the player (giving them more power in bidding) while mob cards give various attack actions against other players. Action cards which depend on a player having unions will most often give the player more votes.

A separate type of Action card starts an auction for Cronies. The played card indicates how many Cronies cards are drawn which are then laid out in a row. Then players proceed with a single-bid, simultaneous-reveal auction for each card.

Once a player’s Action card is resolved and any auctions are complete, the player receives business income. If at the end of any turn someone has enough votes, that player wins.

When receiving a game from The Game Crafter, most often gamers will need to lower their expectations in terms of components. These are print-on-demand games and most of the designers are self-publishing. Game materials often resemble little more than a prototype. It’s unfortunate, but Tammany also falls into this category.

The cards are serviceable, but the paper money included (only included in the higher-priced Silver Edition) holds up a little better. The rules are less than adequate. They’re barely above matchbook size and are so terse in language that a few questions come up during play. It’s easy enough to house rule some quick solutions, but the rules (available online) are aimed at explaining the game inside two minutes.

The main criticism is that the card actions need more development. All of the primary action cards require players to have certain Cronies, so in essence, the game doesn’t allow players many choices of cards to play until they get a minimum number of business, mob, or union cards. Most of the game is a series of auctions where players hope to win punch by punch.

But here’s the real issue: it’s annoying that such a simple and fun game comes in this package for the listed price. This is easily a game worthy of a higher caliber publishing operation because it delivers some good entertainment value for the right crowd. Given a bit of development of the card actions and polish on the art, this game could easily find a larger market.

That market would decidedly be the beer and pretzels game crowd. Tammany is, and rightly should be a mean game. Deals can be struck so that players don’t bid against each other, but really, it’s an auction fight game where knowing the value of a given Crony is paramount. That’s a great core component of any game with close friends with a similar front-stabbing mindset.

Players aiming to grab some drinks and get the gang over for a quick fun take-that style auction game will love Tammany. It even holds up to multiple plays. However, circumspect gamers might feel let down with what they receive from a Game Crafter production. Given a higher quality print and with some additional development, this reviewer could easily see a higher score.

Final Score: 2.5 Stars – Tammany gets the auction-fight formula in the right zone, but it doesn’t feel like a mature value for the price.