We review the children’s real time elimination board game Tamuzi, published by HABA Games. Players are trying to quickly trying to find shelter from lightning strikes while collecting points and eventually rain drops to win the game. 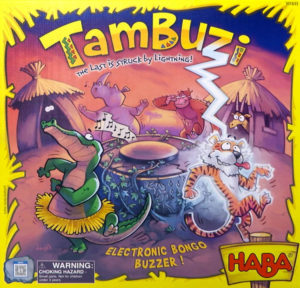 I have a love-hate relationship with most kid games. When I find one, I first hope my kids will like it which is difficult enough. Second, I really hope that it’s not light on game play and heavy on the theme. Ever play Candy Land? Then you know that I mean. My kids see right through those games and don’t want to play or replay them again.

That brings us to Tambuzi, from HABA games, that my kids have helped review for today. This is a real time player elimination game. Will this game stand up to my two critical youngsters and find a slot in their game rotation? Let’s find out!

Tambuzi is a children’s real time elimination game for 2-4 players that plays in about ten minutes. It plays best with 3-4 players.

It’s dry in the African savanna and the only thing that will help is a rain dance to win over the weather god, Tambuzi. The rain comes quick and with it, comes lightning. Players will dance their animals around the sacred village rock and try not to get struck. Players will score points for each animal in a hut and when animals are eliminated when lightning strikes. The player with the most points that round receives a water drop, and when a player receives a second, they win.

My kids and I are very familiar with HABA games and their products almost always have excellent components. Tambuzi is no different. All are of excellent quality. It’s also worth noting that like so many HABA games, Tambuzi has kid friendly and appropriate graphics. There are three main pieces that I want to discuss.

The first and main component is the Bongo Buzzer. This was a new component type that we haven’t seen in other HABA games. It’s an electronic timer with a buzzer sound for when lightning strikes. This was neat and I’m sure like most kids, mine couldn’t keep their hands off of it even when it was not their turn. The important thing to note is it should hold up to your kids abuse, but they don’t need to slam down on the Bongo Buzzer for it to work. It also has three sound modes to change up the game music and atmosphere.

The next components are the animal tokens. The animal graphics of smiling animal faces on the tops and paws/hooves and the sides are rather cute and kid friendly. These animal pieces are durable and should stand-up to multiple plays and more importantly to kids.

The last component I want to discuss is the board itself. This was a unique pie shaped type of board that houses the Bongo Buzzer. The board pieces are thick and sturdy which should hold up to multiple plays and your kids.

The only issue I had was the rule book. Like most HABA games, this comes in multiple languages and so, because of that, the rules are typically limited to set pages for each language. Tambuzi is of the 2 page variety and so even though the rules are not complex, it was hard to conceptualize how to play because the 2 pages are rather dense and don’t have that many examples of play. Our first game was a little bumpy, but we figured it out after playing through some of the rules.

The game set-up varies by the number of players as to how many huts are visible on the starting board.

The first player starts the rain dance by pressing the Bongo Buzzer and following the highlighted action the Buzzers highlights.

The highlighted actions for players are Walk OR Hut.

Walk: Players will move their animal in a clockwise direction either 1-4 Huts depending the number of paws showing on the Bongo Buzzer. They will place their animal next to the game board.

Door Mat – the moving player will swap their animal with another player’s animal if it’s standing on the door mat. The swapped animal is now moved next to the game board and that player now presses the Bongo Buzzer and moves according.

In the Hut – If a player lands next to the board where there is no animal on the door mat and is in the hut, then they will continue moving and press the Bongo Buzzer.

Hut: When the hut shows on the Bongo Buzzer, that player may move his animal onto the hut they are in front of and swap positions with the animal on the hut. The swapped animal is now moved next to the game board and that player now presses the Bongo Buzzer and moves according.

Players will continue to swap positions and move around the board until the Bongo Buzzer makes the Lightning Strike sound. When this occurs, the round ends and the player taking his/her turn eliminates their animal next to the game board. That player receives the lowest point tile available (1-5) and they place there animal on that tile.

Next round: Turnover one of game boards so one hut less is visible. Take the player’s animal of the missing hut and put it in front of the Monkey board (next to the game board). All other players put their animals on the door mats of the hut boards.

New rain dance: the first rain dance is over when there are only three animals left on the board and all the point tiles are given out. Players will now add up their points (from tiles and huts). Animals still on the board receive the number of points (6-8) as shown on their hut. The player with the most points has won this rain dance and receives a water drop. Another round is then played, the same as before.

End Game: When a player receives a second water drop, then they win and the game ends.

As you can see from the How to Play section, Tambuzi, this is the board game equivalent to musical chairs. Instead of one person playing music; players rely on the Bongo Buzzer to move them around the board and it decides their fate as to when the lightning will strike. Overall this game is easy to learn and master for kids after a play through or two.

There are definitely some positive and negative things about Tambuzi. The first is the Bongo Buzzer that is a great tool that sets the speed and suspense of the game. My kids had a blast when we first played and they had a definitely excited mood when they were the moving player. They would rush, trying to find a safe mat or hut for their animal. Even when the lightning would strike and they were “it,” they were still having fun in those first games.

Unfortunately, that’s about all the positives that my kids and I had about Tambuzi. My kids did enjoy their first game but quickly tired of this game in the second and third plays. I have a 10 and 6 year old, so I expected that from my older child but it was my youngest that was the most negative about this game.

HABA Games has the age range set at 6-99 (love that they always put end age as 99). I think because this game has a rather repetitive game play that maybe younger kids would enjoy this game more, say ages 3-5. If you’re kids like games that play the same each time, then no worries, but mine do not. Other HABA games have spoiled my kids with their replay values like Karuba or Animal Upon Animal.

My youngest liked the Bongo Buzzer (especially pressing the button when it was not his turn) but didn’t like that he could not choose to do anything but follow the highlighted options. He even asked at one point if he could move counter–clockwise instead of clockwise and I thought that would be a good suggestion to give players some level of control in the game. Even HABA games like Monza, you’re stuck on what you roll with the dice, but you can choose your path on the race track and the order of the colors on the dice to follow. Unfortunately there’s no free will in Tambuzi and my kids didn’t like that.

The last negative from my youngsters was the elimination and scoring mechanic. If you’re the first or second player, you only get the 1 or 2 point token for your animal when it’s eliminated. Neither really liked the player elimination mechanic in Tambuzi. But it was the low score points for the first two players that my kids had more of an issue with. They both thought it should at least be higher for the first two eliminated because when the rain dance is over, the remaining three animals receive 6-8 points. And if one player had no eliminations, then it was a run away.

This was hard for me to believe that my kid’s didn’t like a HABA game because we have so many in our game rotation. Unfortunately, it’s hard to argue with my kids on their likes and dislikes of Tambuzi. They loved the components, especially the Bongo Buzzer, but the negatives out-weighed the positives. The repetitive play, lack of player choices, and unbalanced scoring really gave them a bad experience and will keep Tambuzi out of our game rotation.

As I mentioned above, I think Tambuzi would be a better game for younger players (lower than age 6) who shouldn’t mind the repetitive play or lack of choices. I think younger players won’t care too much about the scoring either, and will just focus on the excitement of being “it or not it” when the lightning strikes and just have fun.

If you are interested in getting a copy for yourself, it’s about $35.

Final Score: 2.0 Stars – A real time elimination game that should appeal to younger players who should overlook some flaws which older kids will likely not.

Misses:
• Game play is too repetitive
• Lack of player choices
• Scoring is not balanced