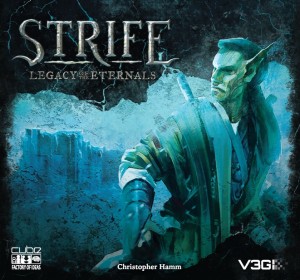 Strife is a card game of head to head strategic combat for two players in which each player is equipped with a group of ten champions that will do battle over many locations in the world of Aerim. Let’s get to the review to see if it is a game you want to add to your collection.

Strife: Legacy of the Eternals is a hand management strategy game for two players to play in 15 – 60 minutes depending on how many rounds you play.

In Strife, players take on the role of one of the members of a group of immortals known as the Endless. Each player starts a round with the same hand of ten champions and will play them simultaneously as they fight at different locations around the world. The player whose champion has the highest power value after the fight wins the victory points.

However, these champions have more than just their power value to consider when selecting them for battle. Each card has a battle ability that will affect the current battle, as well as a legacy power that will affect the next champion the player plays from their hand. The player with the most points at the end of three rounds is the winner.

One of the unique features of Strife is the size of the cards. They abandon the traditional card size for one that is slightly wider and taller. While they are a little awkward to hold, the increase in size is worth it to see more of the amazing artwork on these cards.

Every location, event, and champion card is done with the same quality and the colors just jump off the cards. I will warn you that the box the game comes in is a tin. That is hit or miss for some people, but I don’t mind it since it is in a small box.

The game is all text driven, with the text located at the bottom of the cards. I would have liked the text to be slightly bigger and easier to read, but that is a minor complaint.

At the start of the game each player takes one set of the identical champion decks and 3 locations cards are dealt out.

During the first turn, players will place two champions on the table. One at the current location card and one into the Legacy pile. The Legacy pile is where all champions go after they battle and the card on top of this pile will have its legacy ability activated.

Each turn, following the setup, will consist of five phases:

This will continue until each player is down to one champion left to play, or there are no locations left. The player with the most victory points at the end of three rounds wins the game.

Even though Strife was designed by a different person, there are some similarities between it and IncrediBrawl. Both card games involve battles of characters and have different locations that give bonuses to specific character types. One of the issues I had with IncrediBrawl was that the decks of cards were too large. I couldn’t make any strategic decisions on what card to play because I have no idea what my opponent had in their hand. This is where Strife and IncrediBrawl diverge for the better.

Strife is a game of perfect information. At all times, players know what locations are possible this turn, what the player has left in their hand, and their current legacy power. The only random element of the game is what card your opponent will end up playing. This allows for a game that has players racking their brains, looking over their hands for the best options on their turn, while still considering what you opponent could play.

The gameplay is very easy to teach using the starter game version in the rulebook. This strips away some of the powers and allows people to understand the basic mechanics without throwing them into the deep end of this strategy game. With new players you are definitely going to want to do this. Once you are used to that you can get into the meat of the game.

What allows this game shine are the battle and legacy powers. Without the combo creation element, the game would be boring and repetitive. When I started to read over the different powers, I was excited by the possibilities of playing certain cards in succession. Even though the powers are quite varied in their effects, they all are very well balanced. They allow for each champion to have a decent chance of winning a battle, regardless of their power level.

The champions are also well known in the fantasy archetypes such as ranger, wizard and druid. The game does a nice job connecting the characteristics of the champion with their abilities. Allowing you to develop a story as they you play the game.

The major issue with this game is that it has a steep learning curve. The element that makes it a great game requires a few games under your belt to fully understand the how all the different sets of powers interact with each other. When I play this game with a person who has never played, I will tend to do better because I understand the nuances. There is a point where this gets to a level playing field, but it can be discouraging and frustrating for new players. When both players get to this point it turns the game into the strategy powerhouse that it is.

Another issue is when you have a full hand of ten cards at the start of a round, analysis paralysis can affect players. However, after each player has played a few full rounds, turns and the game will go much faster. Both of these negatives that I mention end up going away the more and more you play the game.

Another unique element about the game is the Fatestone. As I read through the rule book, I was surprised to see the purpose for the die they had in the box. Instead of being rolled to break ties and adding randomness to the game, it instead gives the power to the player holding it to decide their fate. It leads to some interesting decisions for you to make later in the game. You could lose a location to another player, but still want to hold on the die to keep those precious victory points it is granting. It’s a simple mechanic, but adds another layer of strategy to the game.

Strife: Legacy of the Eternals is a simple game at its core with minimal number of cards and rules to play. However, there are layers of deep strategy to Strife, as you see the combinations you can make with the battle and legacy powers. However, this high strategy element can make the game difficult for new players that are trying to learn the ins and outs of the game. You will have to know your audience if you want to bring this game home.

Strife: Legacy of the Eternals is best enjoyed with someone that is on a level experience with you that will understand both their own optimal plays and how to stop their opponents. Strife is a game full of difficult decisions for the players to make and the game keeps getting better the more you play. If you are looking to add a new two player game that allows you to match wits with the person sitting across from you, I think Strife is a good one.

If you’d like to pick up a copy of Strife: Legacy of the Eternals, you can get it for about $20.

Final Score: 4 Stars – A high strategy two player game that is more enjoyable the more you play but can be intimidating to new players.

Misses:
• Difficult to teach nuances of the game to new players
• Lack of character choices
• Small text on the cards