We review Street Masters, a fighting game inspired by the 90s arcade games. In Street Masters, players team up as they attempt to take down an evil boss using a variety of tactics and items. 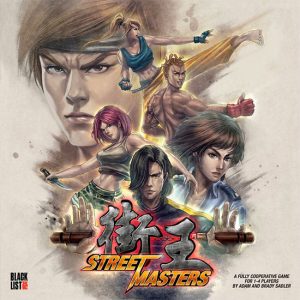 As a teenager in the 90s, I recall spending countless hours at the arcade playing fighting games. Games like Street Fighter 2, Mortal Kombat, and Killer Instinct sucked down quarters as we rotated challengers in and out. The games were simple, yet when you knew the right button and stick combos, the game was elevated to a whole different level.

Today, Blacklist Games seeks to capture the spirit of those fighting games with Street Masters, a cooperative miniatures game where you can punch, kick, and grapple your way to victory…or defeat. So let’s jump into Street Masters and see how well it works. Fight!

Games of Street Masters can be played in either the one-off Arcade mode or as a series of linked missions in Story mode. No matter which mode you chose, the overall gameplay remains the same.

To start, each player chooses a unique hero to control (6 come in the core set), an enemy to fight, and a stage to battle on. Once the decks are shuffled and the board is setup, players are ready to fight.

Street Masters is played over a series of rounds, each of which has three phases:

Fighter Turns: Each player takes a turn, which is divided into three parts:

Enemy Turn: Each card in the enemy play area activates. This is usually the boss and any gear they might have.

Stage turn: Each card in the stage play area activates. Then a new stage card is drawn and resolved. The stage sets the overall theme of the mission (fighting weapon smugglers, breaking up an underground fight ring, hostage rescue, etc.)

Rounds go by in this manner until either the game is lost (determined by the stage chosen) or the players have taken down the boss.

Despite my high-level overview above, Street Masters has a lot of layers of complexity. Now I’m not saying it’s a complicated game, because it actually does flow really well once you understand the basics. Yet behind the simple turn structure is a multi-layered game that has an incredible amount of depth thanks to its modular deck system.

It’s also this system that caused our first play to be a bit of a disaster. To be fair, we did start it late one night at Gen Con after reading the rulebook quickly (so that’s on us). We really didn’t understand the tactics and strategy of the game, which I think is important if you want to do well. Much like games of Sentinels of the Multiverse or Spirit Island, games of Street Masters are more akin to dinner in a slow cooker than a pressure cooker.

That’s not to say that there isn’t action, but characters need time to build themselves up. If you just rush in on turn one and try and punch the boss, you’re going to have a bad time. The fighters need time to get their tactics out and build up their combos. So early in the game expect to chew on minions and carefully try and keep the boss/stage in check. Yet once you get a couple of tactics cards out and some power tokens, you can become a force to be reckoned with.

I think one of the strongest things about Street Masters is the variety. Every character deck feels really unique. Want to steal defense tokens from enemies for your benefit? Grab Gabriel. Or maybe you’d rather drop into a support role? The Natalia is your fighter. Regardless of which you choose, they all had their own individuality and approach the game just a little differently. This uniqueness carries over into the boss and stage decks as well. Each stage has its own goals, deck, and ways to screw with the players.

As much as I love the variety of Street Masters, one quality of life improvement that could have made the game better would be some kind of player aid in the rulebook to explain the complexity and theme behind each of the decks. We apparently picked a really hard stage for our first game, which contributed to things not going well. It would be nice to flip through the rulebook and see which stages/boss are the hardest, and which fighters are the most straight forward. A fan has actually made something like that, so I’d recommend that for new players.

Yet once you get a feel for the game and some of the decks, Street Masters only gets better with each play. Knowing what’s in a boss or stage deck can really help you plan out your strategies much better. After losing one game, you can usually realize where things went wrong and it wasn’t uncommon to want to reset for another go. After wrapping our head around the tactics and strategy of Street Masters, I found myself itching to get it back to the table again.

That being said, I think Steet Masters is definitely a better game at the lower end of the player count spectrum. One to two players feels like the sweet spot for this title (yes, it makes an excellent solo game). Once you get up to 3-4 players, the boss’s hit points start getting absurdly high (80hp) and events tend to wreck the game more. The downtime also becomes a lot more problematic.

Finally, I’ll say that I was a fan of the dice system in Street Masters. I liked that there were not really any misses in combat for the Fighters. All dice rolls are useful, either for attacks or defense tokens. And spending those same defense tokens when a minion or boss attacks you turns them into power. Get enough power and your character flips to its ultimate side, letting you do a super attack once before flipping back over. This helps combat feel really fierce and like you are always doing something productive.

Street Masters not only does a great job of capturing the spirit of those classic fighting games, but it’s modular decks system worked really well to help give the game a ton a variety. From the unique character decks, to the different bosses and stages, I found myself wanting to try out each character to see what makes them tick. Once we got over the hurdle of learning the nuances of the gameplay, we had a ton of fun with Street Masters. This one got better with each additional play. However, I’d recommend you stick with the lower end of the player range.

If you are looking for a fun, dice chucking game that fully embraces its theme and offers a ton of replay value, check out Street Masters from Blacklist Games.

Final Score: 4 Stars – A great fighting game with a truckload of variety and replay value.

Misses:
• You’ll want to stick with 1-2 players
• No guide for new players