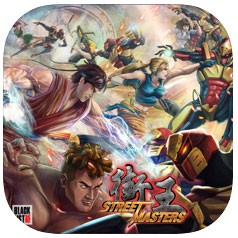 For those unfamiliar with it, Street Masters is a great combat-oriented game that takes me back to my days of playing Double Dragon and Street Fighter at the arcades. While it doesn’t make its way to my table as often as I’d like, I was pretty excited to see a digital version recently released. I’m always up for easy ways to game on the go, so I eagerly dove into the iOS version of Street Masters. Let’s see how it turned out.

If you’d like all ins-and-outs of Street Masters, feel free to pop over to my full review of the tabletop game here. The gameplay in the app is nearly identical to that of its cardboard cousin. You’ll be choosing up to four fighters to take on one of six bosses. Games are also played out in one of four stages. Each fighter has their own unique deck that focuses on one specific area where they are king.

The gameplay uses the Sadler Brothers modular deck system that’s been the basis of all their games (Street Masters, Brook City, and the Upcoming Altar Quest). Rounds rotate between Players Turns->Boss Turn->Stage turn. On a fighter’s turn they can move, play a card, and take an action (active a card in play, move again, defend, etc…). Their main goal is to attack the boss and minions the board.

Each stage has specific rules that will alter the gameplay, but the mail goal is always to take out the boss (using dice rolls from attack cards) before he either KOs all the fighters or the stage rules cause a loss. Expect a lot of moving, attacking, and building up your character with lots of frantic combat.

Street Master jump to the digital realm offers a really nice translation fo the board game. All of the cards from the core game are here and the gameplay is pretty spot on. I did encounter a few bugs early on, but patches and updates have come frequently enough to reassure me that Blacklist Games is giving this enough TLC.

In fact, one thing I really appreciate was the amount of customization the app offers. There are toggles and sliders to make the game go faster, set your default quick play style, and adjust the audio. The game also has a much needed undo button to use during the game (something I considered critical to have in just about any digital board game).

One other thing that was interesting was the achievement system. In addition to the core game content, the app also includes the Redemption pack that lets you play as the bosses. However, that content is locked when you first open the app. But rest assured, there are no microtransactions here to ruin your experience. You unlock these bosses by beating them with each of the games six characters. It was a fun little touch that encourages players to keep trying out different characters.

For play modes, I was a little disappointed that there is no online multiplayer. I have actually played Street Masters with my friend over FaceTime (due to the COVID lockdowns), so I was hoping to play this with him online. Unfortunately, there is only solo play (you could technically also do pass and play) in the app. So that’s a bit of a miss for me. But in solo play, the app offers both story, arcade, and quick play mode.

For newcomers to the Street Masters system, there is a guided tutorial in the app, but it’s not really the best (or at least it wasn’t when I tried it). It teaches you how to play the game, but doesn’t really tell you why you do things. Street Masters has a lot going on, so I’d probably recommend watching a tutorial video online to get a full feel for the game. There is a link to the rulebook in the app, but it links to a dropbox PDF, so it’s not that user friendly.

Despite the rough learning curve and lack of online multiplayer, everything else about the app is great. It’s the full Street Masters experience with none of the setup time. The app even tracks achievements and has unlocks for you to peruse. I also appreciated how quickly and often the app was updated, quashing bugs and giving us quality of life improvements.

Even with only 6 heroes, 6 bosses, and 4 stages, there is enough content in here to keep you playing for a long time. I’m hoping they are planning on releases some of the expansions into the app in future updates. If you are a fan of Street Masters, or even have just been curious about the game in general, the app is well worth the purchase. Street Masters digital is available on both iOS and Android.

Hits:
• Great for solo gameplay
• Faithful recreation of the board game
• Unlocks for you to work towards

Misses:
• No online play
• Tutorial could be better