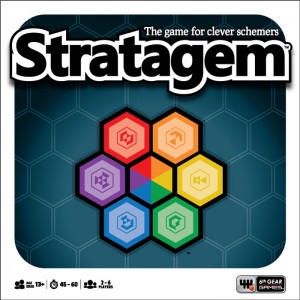 I enjoy a game with a good balance of strategy and luck. While I am absolutely a fan of strategy in games in general, sometimes I don’t want a brain burner. I’m not always in the mood to sit down for 90-120 minutes to puzzle out a complex euro game. Too add on to that, I also always enjoy a little bit of luck in a game. It helps to stop a game from turning into a giant math problem that I need to spend 10 minutes pondering my turn. Stratagem seeks to ride that fine line of balancing just enough luck with a good amount of strategy. Does it succeed? Read on!

Stratagem is an abstract strategy game for 2-6 players that plays in about 30-45 minutes.

In Stratagem, the object of the game is to score as many victory points as possible each turn. During the game, players will be moving around the game board leaving control points in their wake. If these control points can survive until the player’s next turn, they will earn them victory points. Players can also use action cards to increase their position in the game. The first player to reach the VP goal target is the winner.

Each player starts the game by choosing one of the six available colors and grabbing their hexagon control markers. They then are dealt a hand of 3 action cards and someone is chosen to go first.

Stratagem is very easy to learn and turns should go by quickly. Each turn is divided into three parts:

1. Clear – If any of your hexagon tokens are in the control position (darker side up), remove them from the board. These will be the tokens that had scored you VPs on the previous turn.
2. Control – Players flip any claim tokens (light side) to their control side (dark side). These are the tokens that were placed on the previous turn during step 3. When a token is flipped, the player scores VPs according to the numbered space it is on.
3. Claim – This is where the meat of the game happens. Players roll a 6 sided die (numbered 2-4 only) and move their marker that many spaces. For each space moved, a player drops a claim token on that hex. A player can move over another players claimed spots (and replacing their token with your own), but they cannot move over a controlled spot. If a player enters a space containing another player’s pawn, a battle occurs.

Battling is resolved by a roll off on the 6-side die. Highest roll wins with ties going to the defender. The winner gets the spot and the loser moves their marker back home. Players can also play action cards here to help their chances. Players start the game with a hand of 3 action cards and are able to collect more by controlling specific hexes on the board. Action cards can be played whenever appropriate.

The first player to earn a set number of VP (50-100 depending on the player count) wins the game.

I’m not sure if there is a more hated board game mechanic than “roll and move” (except maybe player elimination). In most games, it’s a lazy rule that detracts from the game experience rather than compliment it (I’m looking at you Talisman). So when I first saw that dreaded phrase in the Stratagem rule book, I was prepared to lash out at this game.

However, my worries were unfounded. One of the main problems with the “roll and move” mechanic is wasted turns trying to get to a specific square on the board. I needed to go 3 spaces but I rolled a 4. Try again. In Stratagem, your destination hex isn’t really as important as the path you take to get there. This makes the roll and move mechanic work just fine in the game. I don’t have to worry about rolling exactly 4 to land on that coveted ten point hex. I can shoot past it and still achieve my goal. You can still be screwed over by rolling a 2 when you need a 3, but that’s where a little luck in a game is OK. That doesn’t happen often enough to ruin the game. There is a variant in the rule book to completely replace rolling for people who want a totally strategic game, but I like a little bit of luck in my games so we didn’t try it.

With that all being said, we found Stratagem to be quite enjoyable. Its a light game, for sure, but it’s rules are really easy to learn and the action cards help keep some variety in the game. I also found their suggested play time to be a little generous as we usually clocked in well under their 45-60 minute range (we never came close to the 60 mark).

I did find that Stratagem works much, much better with more players than fewer. One of the joys of Stratagem is the player interaction. Taking your opponents paths out from under them was a lot more satisfying than creating your own over blank hexes. With 2 players, there is a lot less of this interaction. When you get into the 4-6 range, battles will occur early and often. And that 10 point square in the center will turn into a bloodbath. All of this works well into making for an enjoying, yet still casual board game.

The strategy creeps its head into the game when you decide where to go on your turn. The board is cleverly laid out with the highest VP hex (10pt) in the dead center of the board. This is an obvious choice for any player to target. Lower point hexes surround it so players must decide if they should play it safe and stick to the lower points or go all in for the center hex. Finally, there are some control points on the edges of the board to gain more action cards, but there aren’t any points to be had there. In a game where the points move rapidly, that can make for some tough decisions.

We did notice that Stratagem can turn into a game of Kingmaker near the end. One of our games ended with 2 players being able to get to the winning victory point total on their next turn. The player that went before them had a choice to make. Whichever path she replaced would give victory to the other player. For people who don’t like this sort of thing (or even “gang up on the leader” scenarios in games), it’s something to be aware of.

While I’m not always the biggest fan of abstract strategy games, I enjoyed Stratagem. The easy to learn rules and the high player interaction made it a win in my book. I think Stratagem makes for a great game when you have 4+ players, yet are looking for something casual. There are also a nice number of variant rules included to help make the game as random or as strategic as your taste desire. Check this one out today.

If you are interested in the game, it’s now in funding on Kickstarter and is scheduled for delivery in November of 2014.  A pledge of $29 will get you a copy of the game and any stretch goals. You have until Friday, May 30th to become a backer so head over today if you are interested.