Note, this was a play test of the game Startropolis. The components pictured are not final and the rules may change slightly as well. 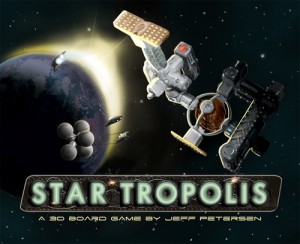 It’s a little hard to decide what genre of board game Startropolis falls into. Well, for one, there is no board. The game is played by constructing a space station using 3d parts. The game is part auction/money management and part strategic building. For the most part though, the gameplay is quite unique and I’m struggling to think of any game I’d compare it too.

Regardless, the end result is a unique and fun “board game” that I’m looking forward to getting a copy of my own. 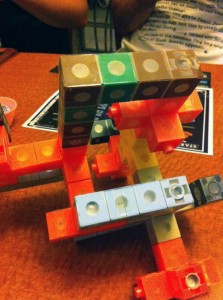 The gameplay is fairly easy to learn. The instructions (i’d guess, as they are not final) are only a few pages in length. The object of the game is to earn the most money by buying and building modules for the space station.
The game is broken up into a series of rounds. Each round invoices the playing of an event card, auction bidding for space station modules, assembling the station followed by collecting revenue.
And that’s the basics. Sounds simple right? That’s because it mostly is. However, each module has it’s own unique quirks that helps keep the strategy deep. I would say this falls into the Catan thinking of easy to learn, difficult to master. Every game your strategy will vary slightly depending on which modules are in play each turn and which you are able to successfully buy.
The game takes about 45 minutes to play, which drops it into the light eurogame category I’d say. The length felt just right during our session. I don’t feel like I got short changed any turns when the end came around, nor did I get bored had the game dragged on for too long.

As I said earlier, the game is played over a series of rounds. At the start of each round, the first player gets to play an event card from his hand that will effect the game for that round. (the first player rotates each round). Event cards will do things like change the module pricing or revenue for that round. If you have an opponent that is heavy in industrial modules, playing a card that hits the revenue they produce will hurt him in the bank.
After the event card is chosen, a number of modules are dealt face up from the module deck. Each card is tied to a 3d space station piece. Starting with the first player, the modules are auctioned off until they are either all sold, or everyone is done buying. Each module is slightly different in shape and statistics. Your own strategy for the game will vary at this stage based on which modules come up for purchase and if you can out bid your opponents for them. 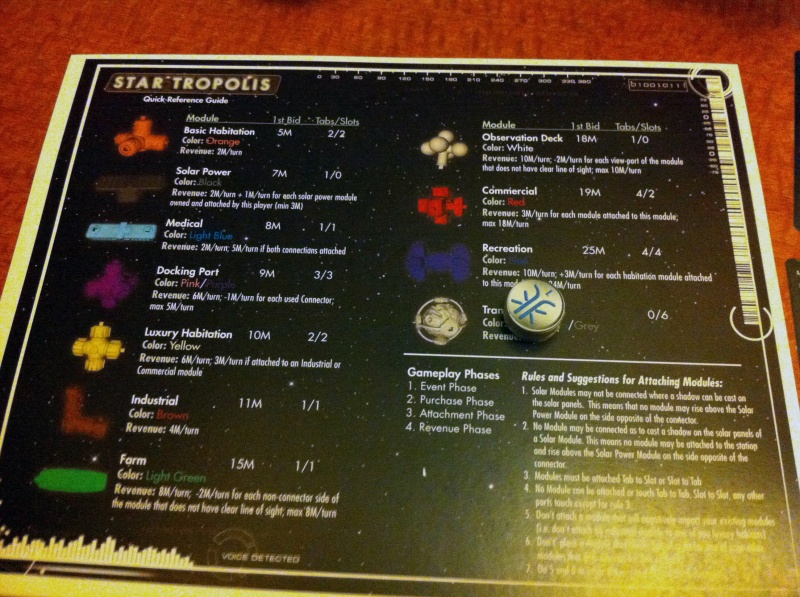 Then it’s launch time. Once again, started with the first player each player goes around the table attaching their modules, one at a time. Some modules have restrictions on where they can be played. So if you module can’t fit onto the space station that turn, it crashes back to earth and you are out a lot of credits.
Once everyone has placed their module, it’s time to generate some revenue. You total up all your module productions and collect that revenue from the bank. This revenue can be used on future turns to buy more modules.
At the end of the game, the winner is the one with the most money. delightfully simple rules that make the game accessible to even non-gamers. 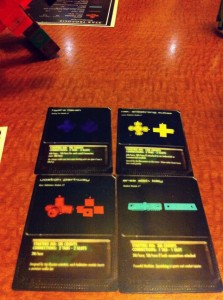 I had a decent amount of luck in my session. I was able to get one of my favorite modules early in the game, the solar module. I like the solar module a lot because it’s revenue compounds the more you own. Think of the railroads in Monopoly. If you can get 3-4 of these attached, then you will be raking the credits in pretty handily.
So during subsequent rounds I was able to buy more and more solar modules (along with a few others to diversify). My opponents really should have tried to stop me from collecting so many solars, as they quickly found out. But they seemed more interested in buying modules they wanted, rather than making sure I didn’t collect too many solar modules. This resulted in me being quite cash rich at the end of the game.
I also could have been screwed had someone played the Solar Flare even card which would have hurt my cash productions from solar modules that turn, but, as luck would have it, I drew that card into my hand at the start of the game. So I was safe.
I ended up easily getting the win and as an added bonus, I was able to beat the game designer himself.  Woot! 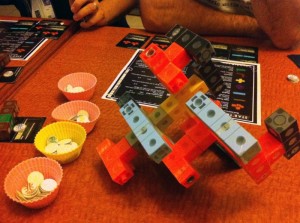 There is a lot to love about Startropolis. It has a great theme. The game is very accessible (gamers and non-gamers should like it). And the idea of building the space station in 3d makes the game. If it were just cardboard pieces on a game board, this game would lose a lot of its spirit. I look forward to seeing the components fleshed out in their fully rendered glory.
If I were to find a flaw in the game, it’d probably be that experienced players will have a bit of an advantage over new players. Not enough to make the game unbalanced, but knowing all the quirks of a particular module will help give an edge for sure. Although the same could be said about just about any game.
I do think the event cards were a great touch. This game could have easily fallen into the trap of a rich get richer scenario. However, even if someone jumps out to an early lead, the even cards can help become an equalizer. The fact that you don’t know what your opponents will play when they get the choice can make for some painful turns.
As I noted at the start, this was a playtest version of Startropolis. I believe it’s near the final phases, so I’m not expecting too many more changes. I have to downgrade my rating slightly as I can’t really judge the components (which always factor into my ratings), however the game play itself (the most important thing) was really solid.