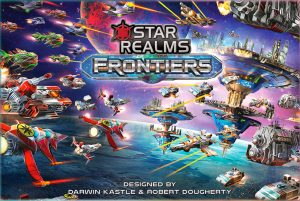 Star Realms landed on the scene in 2014 a big way. A light, portable, head-to-head deck builder, Star Realms was the launching point for a number of expansions and spin-offs (Hero Realms, Cthulhu Realms). After 5 years, one begins to wonder if there is any new design space for Star Realms to grow into. Enter Star Realms: Frontiers, a new stand-alone Star Realms game that adds a new cooperative mode where players must team up to battle against the game itself. Does Star Realms courageously voyage where no card game has gone before? Read ahead to find out.

This review assumes familiarity with the rules but if you are not acquainted with the game, please go read Andrew’s excellent primer on how to play. Go ahead. I’ll shuffle some cards until you get back.

Star Realms: Frontiers comes with 8 Challenge Cards, which are scenarios that pit a team of players (or a solo player) against the automata that takes the role of “The Boss.” Each Challenge has its own unique setup for both itself and the players, and each one has its mechanics of gameplay that the players must adapt to in order to defeat. Each Challenge has its own order of play, which is cycled through after all players have played their turn. Changing the number of turns taken before the Challenge engages in its gameplay algorithm allows players to choose their difficulty level for the scenario.

While playing against the Challenge, each player functions as they would during a standard game of Star Realms, but they have the ability to share resources and attack power during their turn. The players also share one single health score. In the end, either the players defeat the Challenge, or they are destroyed.

The cooperative rules to Star Realms: Frontiers provided a refreshing addition to a game that has the potential for getting stale over hundreds of plays. The automata rules for each Challenge were clear, concise and easy to follow, and each of the eight Challenges had their own unique variation that made the gameplay interesting for each one. The one issue we encountered with the automata is that it took a few rounds to get the rhythm of each Challenge down, which slowed down gameplay somewhat at first. However, nothing in the game was so complex as to bring the game to a screeching halt, as is the case with some other games (I’m looking at you, Race for the Galaxy.)

One of the great things about the way the Challenges are designed is that they are truly difficult. The rulebook warns players to start on the lowest difficulty level and build themselves up to a more advanced level, and the rulebook is not lying in this case. In the games we played at the easiest level, we had a 75% success rate, and were absolutely stomped in all the games we played the next highest level. It may very well be that we are just not very good at Star Realms, but we found the difficulty level of the Challenges to be good enough for even the most hardcore of fans.

We enjoyed the original Star Realms, to be sure, but it is not a deck builder that has hit our table very often. To that end, even though the Star Realm: Frontiers box comes with a bevy of new cards in its central deck, we were not familiar enough with all of the cards in the core game and expansions to make a judgement on these new cards and where they fit into the overall hierarchy of power levels. There was nothing that jumped out to us positively or negatively about the cards the deck.

Star Realms: Frontiers is a solid addition to the Star Realms family. For new players, it gives everything they need to play traditional head-to-head and multiplayer variants, along with the new cooperative rules. For experienced players, it gives new card powers and strategies to explore, and a real challenge to undertake for attacking the Challenge Cards at high difficulty levels. If you are a fan of Star Realms, or just of quick deck-builders, Star Realms: Frontiers is definitely a title you should pick up.

Misses:
• PvP can get repetitive (as with traditional Star Realms)
• Downtime can be an issue at higher player counts