We review Space Explorers, an engine-building board game published by 25th Century Games. In Space Explorers, players are trying to earn the most victory points over the course of the game. 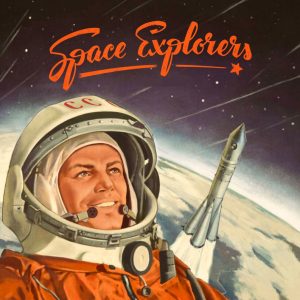 The space race during the 1950s is such an interesting topic for me. World powers competed for technological greatness to discover the unknowns of the universe and to reach out and touch those things we have only seen through telescopes.

All players start out with one of each colored resource, one specialist card, and their personal Hub. Throughout the game, players will use their resources, abilities of their specialists, and cards to recruit the right people for their Hub. The game ends once a player has recruited their 12th specialist or the final project is completed. Players will earn points from recruited specialists, bonuses, and projects they complete.

On a player’s turn, they may draw a specialist card, either from a deck or from an available row, or recruit a specialist to their Hub. Since this first action is fairly self-explanatory, we’ll focus on how to recruit specialists.

Players may recruit specialists to their Hub, either from their hand or from the publicly available row. Each specialist has a different cost that can be paid by using available resources, cards in hand, and/or from resources generated from recruited specialists. You can use any combination of these methods.

When you use your resource tokens, those are passed to the player on your left. Because sharing your scientific knowledge benefits all of mankind. You may also use any cards in your hand, discarding them to the available public row, where they will be worth two of any resource. The more specialists players recruit to columns means that any future specialists recruited to those columns will have a reduced cost, setting up a nice engine builder feel.

Lastly, after a player has taken their action, if they have enough specialists in their Hub, they will be able to complete an available project that’s set out at the beginning of the game.

Let’s start with the rulebook. Because if you’ve read my reviews before or talked to me about my feelings about rulebooks, you know that I despise a bad or poorly executed rulebook. It hampers the learning experience and keeps players from getting into the game. Space Explorers doesn’t do that. In fact, its rulebook is on point. From the clear-pictured examples to the easy-on-the-eyes formatting, players will have no trouble learning this game and finding information.

I played Space Explorers several times with my niece over the last few months and I have to say, we consistently had very tight games. Like 2-point difference games. It was really exciting and fun because it wasn’t always clear who had won. I really appreciated that and was also pleased to find this also happened in my solo games, which I’ll touch on next.

During the initial Kickstarter, there was an opportunity for backers to receive a solo version of the game. I had discovered this by accident during hellscape 2020 and printed it off. If you’re interested in solo variants, I highly suggest taking a look at it. You can find a file for it on the BGG page for this game. I really liked how the solo game changed things up from a multiplayer game and made you think about what to draft, or rather hate draft against the AI. I won’t get into all the ins and outs of how this variant works, but suffice it to say, it’s worth it if that’s your thing. I went so far as to buy the printed copy of the rules and components from the publisher. I enjoyed it that much.

As I mentioned, many of the specialists in this game have special abilities which are really helpful and crucial for helping players eek out more points. While some of the iconography that indicates what those abilities provide, like extra resources, was intrusive, I found many that were not. This was a little frustrating and could have tanked the game. However, there is a very easy and crucial player aid that states what each ability is and what it does. It’s also easy to find your card, as all specialist cards are numbered and are so displayed on the aid. I think if the iconography had been more consistently intuitive, not only would that speed up the game, which can induce overthinking by players as it is, it would have made itself even more accessible.

Space Explorers offers some very enjoyable gameplay. Fans of Splendor should do themselves a favor and try it out, as I think they’ll find some similarities in what they enjoyed about that game with some additional things which set it apart. Although the iconography stumbles what could have been a flawless game experience, there is still a lot to enjoy in Space Explorers.

Final Score: 4.5 Stars – A tight-scoring and enjoyable game that misfires with some unintuitive iconography