We review Sovereign Skies, an area control game published by Deep Water Games. In Sovereign Skies, players are trying to earn the most points by moving their ship around the system and controlling planets. 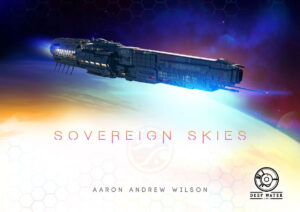 We are sure we have said this before—you can put a sci-fi theme on practically any game and we’ll play it. Warring houses trying to gather energy so they can be the sovereigns in an alien star system? Politicking with alien governments for influence and wealth? We are there! Settle into your seat on the mothership and strap in, because we’re going to take off with Sovereign Skies from Deep Water Games

In Sovereign Skies, the first phase of a player’s turn is to move their mothership, which will determine what actions they can do on their turn. Routinely, the mothership will just move to the next planet in the system but can reverse direction or move extra planets with the expenditure of energy. If a player has majority control of a system (determined by dropships and bases present) then they earn bonus energy every time a mothership enters their system.

The second phase involves players taking planet actions. Each planet offers players the ability to drop one dropship on the planet, take that planet’s politics card, and perform that planet’s special power, which could be recruiting senators (discarding politics cards to pay for senators, which give you bonus actions), build and activate bases on planets where you have dropships, or move your dropships around, or claim the allegiance of systems where you have a majority of control (which earns you points). A player may choose 1-3 planet actions to take on a given turn; taking only one action earns them a bonus energy, but taking all three will cost an energy as payment.

Over the course of the game, you earn points for building bases, collecting senators, and gaining allegiance for majority control of systems, along with points you gain through other planet actions. Gameplay continues until a majority of the senators have been claimed, or a majority of the systems have had bases built in them, at which point the player with the most points is declared the most powerful house, and the winner!

Games that make regular appearances at our table have a commonality in that they have straightforward and simple rules that belie the depth of strategy that the games possess, and Sovereign Skies shares this positive aspect. The entire set of rules can be explained quickly, and the learning curve is quick enough that even new players can jump on board and have a modicum of success right off the bat.

However, there is quite a bit of strategy involved in planning out moves a number of turns in advance, having to balance the needs of energy cost versus energy income, maintaining the majority in systems, and being able to be in orbit of the right planet to take the action you need to. While not the heaviest of games, there is quite a lot that needs to be considered when planning out your turns. Sovereign Skies provided enough brain burning to cause some of our more analysis-prone players to get caught in a quick feedback loop, but not so much so that it caused gameplay to grind to a halt.

While rondel mechanics are not new, we especially enjoyed the implementation in Sovereign Skies, especially when combined with the taste of area control given from the bonuses and point scoring for having majorities on specific planets. While the system of unit majority (bases, unactivated bases, dropships) was intuitive, we did at times find it a bit of a grind to have to continually keep track of which player had the majority in each system. (Note: We freely admit this is not an inherent problem with the game, but rather that we’ve been spoiled by having apps keep track of things like this for us. COVID has made us lazy gamers!)

While we did not engage in them, the core box comes with both a small expansion that gives each player some asymmetric powers, and a solo variant that has an AI that the player has to play against. While not necessarily relevant to our interests, both these additions give players options for expanding their gaming experience, especially those players who prefer to play solo games.

It is not a secret that we love games with science fiction themes, and we were excited to see what kind of theme Sovereign Skies brought to the table. While Sovereign Skies’s sci-fi theme might be of interest to some, it left us a bit wanting, feeling rather glued on, and not contributing much to the overall experience. The “senator influence” really left us wanting—we thought there would be some negotiation or better implementation, but the rules left us looking for more depth here. However, the artwork and graphic design both did quite a bit of heavy lifting in order to support the theme, and were appreciated.

Sovereign Skies sails into orbit with the promise of a light-medium game that requires a fair amount of strategy and planning in order to be the most successful house in the Solar System. Definitely a solid title for all gamers who enjoy rondel-style mechanics with a dash of area control for some spice.

Final Score: 4 stars – Solid strategy and easy rules make this one likely to see again in another orbit.

Misses:
• Pasted on theme does not support gameplay