We review Solomon Kane, a narrative-based game centered around the adventures of the literary hero Solomon Kane. In this dice rolling game from Mythic Games, players control Kane's virtues and guide him in his quests. 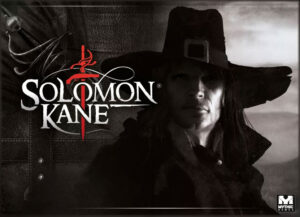 Before these two massive boxes of gaming goodness landed on my doorstep, I was not very familiar with Solomon Kane. OK, I was not familiar at all other than hearing his name once or twice in the past. A quick google search tells me that he’s a fictional character created by the pulp-era writer Robert E. Howard back in the 1920s. Solomon Kane is a man who wanders the world with no apparent goal other than to vanquish evil in all its forms.

After playing many hours of Solomon Kane, that’s apparently very true. But I’m getting ahead of myself. This year, Mythic Games released a tabletop game based around the adventures of this fictional hero. It’s a cooperative, narrative adventure game for 1-4 players that has you and your fellow players helping Kane take on the forces of darkness.

This will be a high-level overview as Solomon Kane is a game that has a lot going on. Its lengthy rulebook will cover how to play, along with some variants. But each player takes on the role of one of the four Virtues of Solomon Kane: Temperance, Courage, Prudence, and Justice (or if you are playing solo, Providence). That’s right, no player controls Kane himself, you all kind of do.

In each game, you’ll choose one of the unique scenarios to tackle. The gameplay is divided up into two styles. Some chapters are story-based that will have you trying to add light tokens to Solomon’s path. Each turn, a player will roll 3 dice and use the symbols to activate their powers. If a power allows them to place a light, they added it to the path. At the end of the player’s turn, they will draw a darkness card that will harm Kane in some way (removing light tokens, reducing his skills, etc.) Once the last darkness card has been drawn, the chapter ends. Players will need to have at least 3 light tokens on Solomon’s path to get the good outcome.

The other way a chapter can be played is via scenes. These involve placing tiles on the table, along with a number of miniatures, spawn points, and various tokens. Scenes will require you to move figures around the area and perform tests. Solomon’s main tests are talk, explore, and fight—each one being tied to one of the four virtues (the fourth virtue is mostly a support one). Tests are simply taking the relevant skill, adding any bonuses from the action or virtues, and drawing a card from the event deck, which has numbers (usually from 1-7). Higher is usually better. But the storybook will list the range of outcomes.

Any actions you take though will require specific symbols on the dice you roll each turn. After each roll, you can reroll or flip one die, so you aren’t wholly dependent on the RNG. You can also pass unused dice to other players or bank them for a future turn. You will always have five powers to choose from, two of which come from your cards and are discarded and replaced after use.

At the end of a player’s turn they still draw a darkness card, but these will instead move enemy miniatures around the board via a simple AI system. Most of the time, Shadows will be your main worry. If they make their way to Kane, they cause an event card to be drawn, which are all bad. So you’ll want to stop that if at all possible.

The chapter will determine how the scene ends, but it could be defeating an enemy, talking down a foe, or finding enough of a specific item while searching. Each scenario has a unique story deck that will have you drawing numbered cards at certain times, adding to the story, or providing rules for challenges.

There is a whole lot more to playing Solomon Kane, but that’s the basics. If you want the full rundown, you can download a PDF of the rules here.

When I said two massive boxes showed up for Solomon Kane, I wasn’t kidding. These are big, heavy gaming boxes with a lot of content in them. One of these boxes is devoted almost entirely to the miniatures. Coming from Mythic Games, they, of course, look fantastic. There are 50-60+ of them in the box, all representing various characters in the world of Solomon Kane. The other box contains a plethora of story cards, tokens, map tiles, and scenario books.

The first thing you need to know about Solomon Kane is that this game has a pretty hefty learning curve. Expect to be flipping back to the rulebook quite a bit during your first game. While the core gameplay loop itself isn’t hard, there is just a lot going on with plenty of keywords and edge cases you need to be aware of. It wasn’t really until my second or third game that things started to run smoothly. And during those early games I tried with a few different player counts. For me, I think Solomon Kane is probably best as a solo game, or with exactly four players. With anywhere in the middle, you’ll still going need all four virtues to be present, but you only have partial control over them. This leads to a feeling of playing at somewhat of a disadvantage since you lose access to the neutral virtues decks.

But I really enjoyed Solomon Kane as a solo game. Providence is a super-powered virtue that can do just about anything. It also lets me play the game at my own pace, not having to worry about reading lengthy narratives out loud or having to rely on another player to do a critical action. And that’s one of the areas where Solomon Kane kind of missteps a little in multiplayer gaming. Many times you’ll know the action you need to do, but your virtue might just not have access to it (searching for example). So turns like that, while not really wasted, are spent either buffing another player or doing something secondary to the main objective. And since time is usually critical in Solomon Kane, you can feel a bit hampered at times.

But outside of that, I really liked the mechanics in Solomon Kane. The dice system felt pretty unique, and the reroll/flip mechanics helped make sure that turns where you could literally do nothing were super rare. The division of story/scene chapters was an interesting design decision, with scenes chapters definitely being the most interesting of the two. The tactical space of using the miniatures not only looked cool, but gave the game much more room to stretch its legs. Story chapters where you are just trying to place light tokens feel a little boring at times.

The success of each chapter does have multiple paths, and there are even branching paths in the game, which I found that to be really interesting. Some have only minor outcomes, but others actually affect the plot pretty greatly. So there is some replay value here if you want to go back and try out different options in each scenario.

Finally, one thing I need to point out is that there is a large amount of errata for Solomon Kane already. Mythic Games has already released a PDF of the errata, but needless to say, I was kind of surprised there were this many errors. Sure, it’s a big game with a lot of moving parts, but many of those really shouldn’t have gotten past proofing or playtesting. Alas.

Despite a few bumps in the road, Solomon Kane is still a really good game. While it does work fine at any player count, I think solo play is the way to go—either four handed with all the virtues or with Providence if you like the idea of a super virtue. The narrative story were all entertaining and there is some nice variety in the missions and even from chapter to chapter.

I should also point out, that despite being a minis heavy game, this is not a dungeon crawler. I’ve gone through entire scenarios without throwing a single punch. This is a dice rolling game that’s at its strongest when you are enjoying the narrative experience and taking on the various challenges.

Final Thoughts: 4 Stars – A unique game set in the world of Solomon Kane that will draw you in with its narrative, despite having some mechanical missteps.

Misses:
• Not great at 2-3 players
• Lots of errata already
• Story chapters take a back seat to scene chapters