We review Snowman Dice, a dexterity and dice building game published by Brain Games. In Snowman Dice, players are trying to quickly build a stack of snowman parts and deliver it to the north pole. 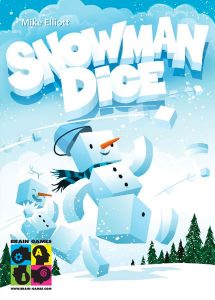 Publisher Brain Games seems to have found themselves a niche with their line of easy to learn family games. First they rocketed onto the scene the stellar dexterity game Ice Cool and later, Ice Cool 2.  This year, they’ve slapped on their snowshoes and headed back to the North Pole for their newest family game, Snowman Dice. This quick-playing, dexterity dice game will have players building a snowman and delivering them to the North Pole.

In Snowman Dice, you are trying to be the first player to earn three points. Each player starts the game with five dice. Each die has six different icons on them: Top, middle, and bottom snowman parts, a wild snowflake, a move icon, and a snowball.

To play, someone says go and each player rolls their five dice (reroll as much as you want). The goal is to create a stack of dice with a snowman bottom, middle, and top all in the proper order. Should you be missing a piece, a wild snowflake can substitute. Once you have your stack, you need a die showing an arrow to move your snowman. This lets you use a finger to push your snowman to the North Pole tile in the middle of the table. Doing so ends the round and you score 2 points if you didn’t use any wilds, and 1 point if you did. Everything is then reset and a new round begins.

The one icon we didn’t talk about was the snowball. If you roll one of these, you can flick it at any other player’s snowman. If you cause their pieces to topple, they have to start all over.

Some games straddle the line between games you play with your kids and ones you can play without them. Ice Cool (and the sequel, Ice Cool 2) dominated in this area. However, Snowman Dice is going to fall outside of this range as a game you will probably only ever play with your young ones.

Overall, the rules are super simple and even the youngest of kids had no trouble picking this one up. Adults can also give themselves a handicap and start further away from the North Pole should they want to make things easier on their kids. Every kid we tried this one with had fun both building their snowman and wrecking other players stacks.

Which brings me to the other side of Snowman dice. Just about every game of Snowman Dice we played, both with and without kids, quickly devolved into carnage. What started as a simple game would have players hoarding snowballs to wreak other player’s plans. Perhaps we are just particularly destructive, but snowballs were flying everywhere with dice crashing down from them. There was lots of shouting, cheering, and even players punching other opponent’s snowmen across the table. Was any of this in the rules? Nope. But there was a lot of laughter and enjoyment. I was shocked at how our games always started out calm and organized and yet ended with masses of flying dice!

And on that front, Snowman Dice delivers lots of entertainment. If you are looking for a game that’s orderly and people follow the rules, you can probably keep walking on this one as we had the most fun flicking snowballs at other people’s stacks. I think we didn’t even keep score in half of our games, yet we still had plenty of fun.

Snowman Dice is a really hard game for me to rate. It’s simple and has a few clever twists that were able to spark a lot of fun. As a kids game, it’s pretty good as our little testers all loved it. As an adult or gamer game, it’s probably not going to see your table too often. Yet the times we did march it out, ended with lots of laughter and hunting for dice. So take that how you will. I think Snowman Dice makes a great filler game to play with your kids, or even a fun distraction when you have a few minutes to kill.

Hits:
• Easy to learn
• Kids all enjoyed it
• Flicking snowballs is tons of fun
• Very portable

Misses:
• Probably not much staying power
• Not much crossover appeal