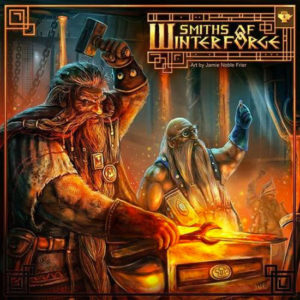 The smell of the forge and sound of hammers on anvils is your life and livelihood. You will control 1 of 6 possible legendary Dwarven guilds of Winterforge vying for an unrivaled prize. Only one thing stands in your way from achieving this… everyone else.

As noted above, you will choose 1 of 6 guilds vying for the Royal Centenary Contract, guaranteed work for 100 years. Players will move their agents to and from the precincts of Winterforge and attempt to complete contracts, recruit guild members, buy components, forge wondrous items, and ideally, be debt-free to gain the most reputation points (REP). The player with the most REP at game’s end wins.

Setup for Smiths of Winterforge is not complicated given the many decks and pieces. All decks are shuffled and placed around the Precinct board for all players to reach.

• Each player is dealt two Royal Contracts and they choose one and discard the other.

• The Component Deck should be separated into levels 1-3 and then turn 3 cards of each level face up so there should be a total of 9.

After set-up choose a first player and each player may perform 3 actions on their turn. All available actions can be performed more than once per turn.

Each Precinct has 1-2 actions that can be performed:

• Take Contracts – Take up to two of the face up contracts but only have a maximum of three.

• Request Funds – Request 1 coin from your guild if you have less than 3.

• Take Loan – Take one of the face up loan cards. Players can only have maximum out 2 outstanding loans and end game players receive -2 REP for each unpaid loan and you will gain +1 REP for each paid back loan (max of +2)

•Pay Loan – Pay back any amount of coins onto your loan card.

• Purchase – Players may purchase 2 separate components from any of the 9 available face-up component cards. Players pay the component cost listed in coins.

• Trade – Players may initiate a trade of crew, coin, components and unfinished contracts to another player. This only counts as an action if you actually make a trade.

• Market Refresh (FREE ACTION) – If there are 3 components of the same type in one row – reshuffle and draw 3 new cards OR once per turn if a player wants to spend 1 coin they can instigate a component row refresh as well.

• Forge a Contract – Attempt to forge a contract card from your hand. Completed contracts give you coins and REP

• Training – Pay coins to increase a skill by one point. Higher skill levels give you more REP.

• Hire Crew – Hire one of the face up crew cards for your guild. You pay the coin cost indicated on the crew card. You can only have a max of 2 crew and you gain +2 REP for having a full crew. Note: After each completed contract you must pay 1 coin to each crew member.

The game ends if a player completes their Royal Contact OR if contract card deck runs out. All players add up their REP and the guild with the most is awarded the Royal Centenary Contract.

I have to admit I’m not the biggest Euro game fan. I find them to be somewhat long and dragged out games where you can be overwhelmed by the many options and paths to victory. Smiths of Winterforge is a Euro style game, but it’s not an overly complex game and it shouldn’t overwhelm players. There should be no analysis by paralysis for most players since you are given 3 actions, which are split between movement and precinct actions. Yes, the actions differ, depending on what precinct you’re in, but there’s a logic to them and they are easy to learn.

The path to victory is also straight forward, you need the most REP to win either through forging contracts or the Royal Contract. This sounds simple to achieve, right? Well, it’s much harder given that other players are grabbing contracts, components, crew and even loan cards each round, which changes your options frequently. This is one of the reasons that you really need to pay attention during your opponent’s turns because things are changing constantly and you will need to be flexible with your turn and possibly overall strategy.

But this game has a great balance among the many player actions and options. One of the balanced features is that you can continue to attempt to forge a contract (regular or royal). If you fail because of less than ideal components, low skill ranking, or poor rolling, you will receive a work token that gives you an additional +1 to your next attempt. Given that you can repeat actions, you could attempt to forge 3 times in 1 turn and in future turns until you succeed. This keeps you in the game even after a few failures.

The component cards also give you a nice balance because they’re made up three levels of quality and they also come in 3 types (metals, gems, and raw materials). The better quality give players higher dice to use when forging the contract. But the higher the quality, the higher the coin cost. So, if you have a contract that needs lesser components you don’t have to break your bank and if less is all you can afford.

Lastly the contract cards come in different difficulty levels that again, give the game a nice balance. The contract cards range from 1-3 REP and as they go to lowest to highest, so does their difficulty, but you also gain higher coin as the difficulty increases. The most difficult of all contract cards are the Royal Contracts, which at the start of the game, seem very difficult to ever forge. But as you successfully forge contracts you will gain +1 skill ranks of the type of contract you forge, i.e. weapon, armor or jewelry. Plus as you buy and horde the best quality components and know you can continue to attempt to forge, the Royal Contract doesn’t seem out of reach.

It’s also worth noting that player turns go very quick and so you’ll experience little downtime between turns. But being that this is a Euro, you need to be efficient and economical with your actions and turns. Try not to waste actions and never sacrifice them. You get 3 actions, so be sure you plan to use all 3 actions effectively so plan out your turn before you take it.

The one player option that I didn’t think was balanced was the loan cards. These range from players receiving 10, 8 or 6 coins and repaying +4 what is borrowed. First, there was not enough of the 10 coin loan cards and all loan cards overall. This impacted the higher player count games more than the lower. There simply was not enough variety to make it balanced. But good news readers and backers is that Table Tyrant Games was already aware of this and they will be adding more loan cards to the final version.

Even with a prototype version, my group and I definitely had a ton of fun with Smiths of Winterforge. I think it was mainly due to the fact that the game balance keeps the play competitive and every game was close up through the final scoring. I think Smiths of Winterforge would appeal to the Euro and non-Euro gamer alike, given its competitiveness and various player options.

Overall it’s a great sign that my group enjoyed a prototype that’s not even in its final stage. I know there are still more changes to come, like additional loan cards and tweaks to the rules, but the game we played was a blast and we look forward to playing the final backer or retail game version.

If you’d like to become a backer, pledges start at $49 AUD (or about $37 US) for the base game including all stretch goals. Smiths of Winterforge is scheduled to be in backers hands by April 2017 and you have until November 15 to become a backer. Head over today and check it out.