We review Slide Quest, a family-friendly dexterity game published by Blue Orange Games. In Slide Quest, players must work together to guide a rolling knight through each of the games 20 levels. 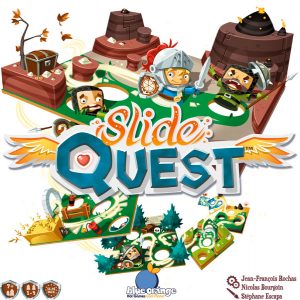 Back in the 1940s, I’m not quite sure what they did for entertainment on a consistent basis. There was no Netflix, video games, or even the internet in general. What you did have was a wooden box and a marble. That’s right, who here remembers Labyrinth? No, not the fantastic David Bowie movie. But the dexterity game that had you trying to guide a marble through a maze by manipulating various knobs on the box. It was fun for about 10 minutes until the marble fell in the hole for the 20th time and you moved on to something else. But the question remains, can that concept actually be fun?

Slide Quest, published by Blue Orange Games, seeks to answer that question with their fresh take on the concept. In this family-friendly title, players must work together to move a knight through a series of paths and obstacles by manipulating a series of levers.

The goal in Slide Quest is for the players to successfully guide the knight to the end of each map while avoiding obstacles and traps. Each level has a setup that involves putting terrain on the map (arches, rocks, fences) and occasionally bad guys to conquer. The game comes with 20 maps divided into four different worlds.

To play, each player is in charge of one lever of the game board (when playing with less than four, some players will need to control more than one lever). The rolling knight is put on the start space and the players must use their lever to raise and lower their side of the board in the attempt to move the knight along the illuminated path (for most levels). Other times players must use the knight to bash their enemies into pits. Should the knight fall into a pit, or knock over a stick of dynamite, he loses a life. If his life counter gets to zero, the players lose. If they beat all 5 lives (or all 20 in the Grand Quest mode), they win!

I must say, I was quite impressed with Slide Quest’s production values. Not only is the art vibrant and immersive, but the physical pieces are excellently produced as well. Slide Quest had a chance to be a disaster if the components didn’t hold up, but they do in spades. The Knight smoothly glides along the game board, and the levers, while simple, do their job adequately.

Casually looking at Slide Quest, I wasn’t too impressed. The game seemed simple and not that interesting, almost a one-trick pony. However, once I sat down to actually play it, my thoughts quickly changed. There is some kind of innate fun in Slide Quest as you work with your fellow players to guide this tiny knight. That’s also why I think this game works best with 4 players. Part of the charm of slide Quest is in the required communication with your fellow players. It’s not uncommon for shouting to occur as the knight gets a little too close to a pit or dynamite. With fewer players, you have a little too much control over the game board and it loses some of its charm.

I also really liked the variety in the game. You can make Slide Quest as hard or as easy as you like. For a family game, you can just ignore the life counter and play with your kids, just trying to make it to the end. When I tested it with the little ones, this was definitely the preferred way to play. They had fun yelling at each other and trying to guide the knight to his deviation. There was much cheering when an enemy was vanquished by knocking them in a pit.

For adults, the game can seem a bit too easy until you start the timer. There is an integrated app you can download that will give you limited time to get your knight to the end. Fail to make it to the end before the timer goes off and you lose a life. If you want the game to be a bit more stressful, that’s certainly one way to accomplish it.

The only downside I’ve encountered with Slide Quest is that the setup feels a tad long for each level. You have to tear apart the board and set up new pieces, and if a level only takes you a few minutes to beat, this can be a little annoying. Usually, by the end of the 5th level, we are ready for a break from that. Thankfully, Slide Quest includes a save system so you can continue your quest at a later date.

Slide Quest was not what I was excepting, but in a good way. A game that seems from the outside to be a one-trick pony not only had a surprising amount of variety, but was an absolute blast to play with the family. Hearing my dad shout “up yours” at my mother during the game still makes me smile to this day (he wanted her to raise up her side of the level and was caught up in the moment).

For those looking for a great dexterity game to play with the family, Slide Quest absolutely fits the bill. It’s unique, well-produced, and will probably keep your family and friends quite entertained. For your gaming group, it’s setup time will probably keep it out of the realm of a casual filler game. But for fans of the dexterity genre, it definitely has its place.

Misses:
• Needs four to be at its best
• Setup and tear down feels a little long