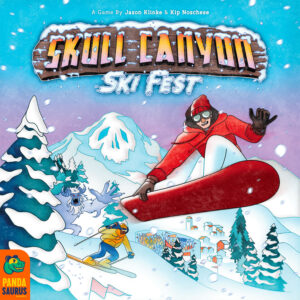 A lot of classic movies take place at ski resorts. Ski Patrol, Better off Dead, Hot Tub Time Machine, The Shining (well there’s snow so Jack could’ve gone skiing if he didn’t want to be a dull boy), about half a dozen James Bond films, and the made for TV movie, Snow Beast, which also had a yeti, I think. The stills on Google don’t look too promising but I’m trying to impress our resident [Editor: self-proclaimed] movie expert Chris Sacco with some deep cuts.

Anyway, there are not as many games dedicated to this winter pastime and that’s where Skull Canyon: Ski Fest piqued my interest. A Tomb of Horrors shaped mountain, a yeti, and shredding on some fresh powder all day and then living it up like the 25-year-old I wish I still was at the lodge all night. Let’s do this!

There are two distinct parts to Skull Canyon Ski Fest which will probably get abbreviated as I go along. Phase 1 is called Skiing. Phase 2 is Apres-ski which you might think means fest but is actually French for after skiing.

Your goal during phase 1 is to collect slope cards and play them to ski runs. On each turn you get two actions which can be any combination of the following:
• Train – collect two slope cards
• Ride a Lift – Move up the mountain
• Play a set of slope cards to Ski a Run

A set of slope cards needs to match either the style icon or the color in differing quantities depending on the run. The green runs require two cards, the blue runs require four cards, and the black runs require seven. Wild Yeti cards can be used as a substitute for either color or style. Completed runs are worth varying 2, 4, and 8 victory points for green, blue, and black runs as well as 1, 2, or 3 Fame points respectively. Victory points help you win while Fame can be cashed in for gear or victory points at the end of the game. Some runs will have tokens that will grant double the fame for matching the style shown.

A second part of the run is claiming it. The first person to ski down it claims it. Another player can steal it by skiing it and spending one more card and placing their token on top of the previous token. This pilfering can go on with escalating costs but the players with the most runs of each difficulty earn extra victory points as does the person with the most runs overall.

If one yeti card was played the yeti meeple/token can be moved to any ski run which blocks it from being used by everyone. If two or more yeti cards were played, all players must move one step down the mountain (their choice of available path) as an avalanche comes down the mountain.

Players will have four turns each day before Phase 2 happens.

Apres-ski has players spending slope cards and fame to gather more slope cards, move style bonus tokens around, and pick up dynamite like a James Bond villain on holiday. The last step for everyone is to gain more slope cards based on the weather the next day and buy any gear.

Scoring is tallied after the third ski day to see who the most legendary skier or snowboarder at Skull Canyon at the resort’s Grand re-opening was.

The set collecting and playing cards to claim runs is reminiscent of Ticket to Ride and that’s probably a good starting point for comparison. One major difference between Skull Canyon and Ticket to Ride is the amount of player interaction. Avalanches or a maliciously placed yeti can wreck another player’s whole turn or more by forcing a change in strategy or effectively taking actions away from players.

However, unlike in Ticket to Ride where a city can effectively be closed off, I really like how players can keep reclaiming runs from each other. Do you spend five cards to get back that green run (again) or re-take a blue one? One reason to take the green may be to prevent that player from gaining the majority reward at the end of the game. There are quite a few opportunities to make choices that have both short-term and long-term consequences.

My biggest gripe with the game, which is pretty minor, involves the tiny little exceptions to rules that, to me, hold it back from being a great gateway game or an alternative to Ticket to Ride. Some examples of this are you clear the gear cards only at the end of Day 1, the fourth round each day grants +1 fame for reaching the bottom of the mountain, and an avalanche doesn’t grant points or fame but you do get fame in that twilight round of each day. These oddities aren’t like a set of moguls suddenly popping up on your downhill course but it’s a little bumpy.

If I was teaching this to board game neophytes, I’d probably skip the Apres-ski phase and just jump to the hotel to refresh cards and buy gear. The one-way action track in this phase is an interesting idea and one that many gamers might enjoy as it forces some tough choices between rushing ahead to ensure you get the thing you want at the risk of getting fewer actions during the phase. But it doesn’t add a lot for the people just trying to wrap their heads around the skiing phase.

But something that I think gamers can enjoy and sink their poles into are the gear cards and style tokens as they add an additional layer of decisions to ponder. As stated earlier, fame can be traded in for points at the end of the game or used to buy gear. Gear is also worth victory points while also providing some short-term benefits. It might be an extra action one per day, requiring one less card to steal a run or requiring an opponent to play an additional extra card to steal a run. The downside of gear is you’re using it for one to two turns, so while it’s cool there is often a limited utility, but in the right situations gear can really be powerful tools.

Skull Canyon Ski Fest is fun and recommended for people who want something a little meatier and more interactive than Ticket to Ride. The skiing theme feels fresh and works well with the mechanics as you move your stylized snowboarder or skier meeples up and down the board. Much like extreme sports, there are not always a lot of new moves being shown off but that doesn’t make it any less fun.

Misses:
• Negative interactions may not work for all players
• A few extra rules add some overhead without much payoff