We review Silver and Gold, a flip and write board game published by Pandasaurus Games. In Silver and Gold, players are trying to earn the most points over the games four rounds by drawing polyomino shapes. 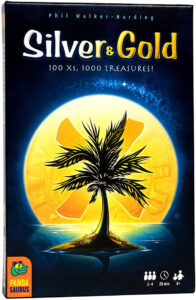 Phil Walker-Harding is no exception when it comes to delivering great designs of small, light games. Most of his creativity is focused on simple, straightforward themes with decisions that match. Titles like Barenpark, Imhotep, and Sushi Go! show he has a lot of experience in this category.

His most recent game, Silver and Gold, is a roll-and-write game for 2-4 players. Players take the role of treasure hunters exploring islands looking for treasure and other valuables such as palm trees and coins. It’s best played with three or four players.

In Silver and Gold, there are two types of cards: Treasure Cards and Expedition Cards. Treasure cards have a glossy surface and contain boxes that players will fill in using dry-erase markers included. These cards are kept in front of players and, if completed, are worth victory points at the end of the game. Expedition cards show polyomino shapes that indicate where to place X’s on a player’s Treasure Card.

Most of Silver and Gold can be played simultaneously, however, there are some effects that will need to be played in order. On a turn, the active player draws an Expedition Card. After filling in the indicated boxes, players check if they covered one of three symbols: a X, a coin, or a palm tree. Coins give players points based on other coins collected, X’s allow players to fill in extra boxes, and palm trees give players points based on the number of palm trees in the card row.

After a player completely fills in a Treasure Card, they set it aside and take a new one from the row of 4 cards in the center of the table. If the seven Expedition Cards have all been revealed, then the round is over and a new one begins. At this point, the Expedition Cards are reshuffled, meaning the next round’s shapes will be drawn in a different order.

After four rounds, the game is over. At this point, all players count how many points they’ve gained from completed Treasure Cards, coins, and palm trees, as well as Seals. These are in the top right corner of a Treasure Card and will reward bonus points to the player based on the number of completed treasure cards matching the color of the seal. And of course, whoever has the highest score wins the game.

Silver and Gold is a very good game for new gamers. The structure of a turn is simple and doesn’t ask for many decisions. Because of the simultaneous gameplay, it’s easy for anyone to grasp what to do on their turn.

Silver and Gold also has solid components. The glossy cards work extremely well with the roll-and-write (or flip-and-write) mechanisms. Player’s won’t need to put sleeves on these cards, however, this means that the cards will take some damage over time

Although Silver and Gold is a good introductory game, sometimes it can feel like it is too simple. This game feels like it is a tabletop version of Tetris with no timer. The concept is good, but there needs to be something else to make it more complex.

This also means Silver and Gold can feel a bit repetitive, and there is a bit of luck involved. Sometimes it can get frustrating when cards are constantly being drawn that don’t help you at all, which can cause some players to fall behind.

Also, it doesn’t feel like there are many different ways to win, as the points from seals, palm trees, and coins are extremely minor and feel more like tiebreakers. There needs to be more creativity in what you do on each turn.

Silver and Gold is a good game, but simple mechanisms cause it to fall behind other roll-and-write games, even if they are more complex. This is a good game for a family gift or for someone who really enjoys spatial games, but don’t expect this game to come off the shelf frequently.

Final Score: 3 Stars – Even with a simple ruleset, it’s just too plain and straightforward to get many repeat plays.