We review Sierra West, an action programming and deck building board game published by Board and Dice. In Sierra West, players are trying to earn the most victory points by managing their resources. 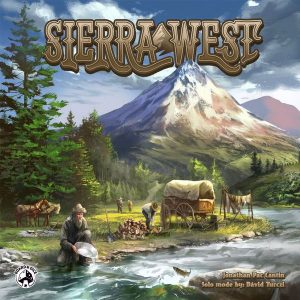 Saddle up cowboys—we are headed west in search of gold. And bandits. And apples. And fishing. Sierra West allows us to pick from four different modes each game, slightly changing how we approach settling in the Old West. You’ll hike up the mountain and pull your wagon on the trail in reach of the thing that all frontiersmen were looking for—victory points.

Sierra West is a deck-building and action programming game for up to 4 players. Although it’s best with 2-3 to keep downtime to a minimum.

Regardless of your chosen module, the basics of Sierra West are unchanged. You’ll start with a small deck of cards and draw three each round. These cards show different icons and you’ll have to slot them into the top of your player board on your turn, effectively covering up some of the actions and assigning a cost to others based on where they fit.

Once you have the cards slotted, you’ll move one of your two pioneer figures down their trail, taking the actions they reach. You can move either figure in any order, allowing some small amount of programming your actions in order for maximum efficiency.

Many of the action spaces give you one of the games many resources—wood, stone, food, and gold. You may also get movement points that can be spent moving your wagon down the trail or moving your other pioneer up the mountain of available cards that is created during setup (in a 7 Wonders Duel-like pyramid where only the top cards are face-up).

The shovel action will then allow you to gain a face-up card if your pioneer is standing on it or, alternatively, purchase a cabin from the… cabin store I guess? When you take a card, it can either go into your discard pile to be shuffled in later or on top of your deck if you are sure you want it next round.

Once a pioneer has finished their path they can take the summit action on the top any of the three cards you’ve played. Most often you’ll be spending resources to move up a track which will be worth points and award you a special bonus immediately. At the end of the game, your progress on these tracks is multiplied by the distance your wagon has traveled to add a significant number of points to your total.

Each module adds one card to players’ starting decks and the pyramid of public cards is always unique to the module you are playing. In the Outlaws and Outposts module, for instance, you’ll have cards that give you ammo and actions to try to shoot at the bandits which turn into victory points at the end of the game. All the modules are somewhat similar—they introduce a new resource and a new way to score points, but each with a small twist in how to accomplish them, giving the game a slightly different feeling.

The game ends once all the special cards from the mountain have been revealed. Everyone gets an additional turn to hopefully make use of their resources and then the player who accumulates the most points is the winner.

Sierra West should be a game I love. The Old West setting appeals to me. Deckbuilding with multi-use cards. Modules that change the rules just enough that you can add 2 minutes of rules and get a different experience. Instead, for a number of reasons, Sierra West is a game that is… meh.

Without a doubt, the execution of the theme is the strongest positive here. Obviously, Sierra West is a eurogame. The theme could be almost anything. But the modules especially do a great job of giving the game some character. In the Gold Rush module, you’ll roll a die to determine, when mining, how much gold you get and how much is just stone. When you shoot at bandits in the Outlaws module, you’ll be using up ammo and rolling for hits. It’s never too punishing to miss on the rolls, but it certainly is the most fun part of Sierra West.

Unfortunately, getting to that requires that you suffer through a clunky card programming mechanism. The idea of arranging the cards in a way that covers up some symbols and makes you pay resources for some actions is interesting. But the reality is that the actions on the cards are almost always largely the same that the decisions here are either trivial or obvious. Sometimes your only decision is if you’d rather get more stone or more wood. Well, which do you need to perform the summit action at the top of the card? The decisions on what to trade off just make themselves too often for it to be interesting enough to carry the game.

My absolute least-favorite part of Sierra West is the scoring tracks. There are three different tracks and you’ll go up a certain track based on the summit actions you take. You might think there is some value in going all-in on one track, say, trying to race to the top of the red track at the expense of the brown one. Well, in reality, every step on every track is worth one point. The only incentive for getting to the very top of a track is that other players cannot max out a track after that. But they will go up a different track instead. It isn’t like you can specialize your deck in a way that makes you better at one track over another.

But that won’t stop your friends from taking forever trying to figure out the optimal card placement. There can be significant downtime, especially at higher player counts. Sierra West does give you some actions you can take off-turn which almost makes it worse. You have to pay a little bit of attention on other player’s turns so you can potentially earn a bonus resource here and there.

Ultimately, the game gives a lot of permutations and choices that just fail at being engaging. Do you want to go up the gray track or red track? Who cares? Want to earn more food this round or stone? Doesn’t matter. Even the cabins you can purchase, which can give you a special ability, you more often than not will just buy the cheap one to fill a spot so you don’t lose points.

After trying all the modules—which are well executed in terms of theme and are easy to learn and teach once you have the basics down—I just wasn’t interested enough in what Sierra West has going on to explore it any more. It’s a fine euro game that does well with the theme, but isn’t deep enough to keep anyone playing over and over.

Final Score: 2.5 Stars – Fun modules but too little depth to get to the table repeatedly.

Hits:
• Modules are perfectly suited for the theme.

Misses:
• Collect resources, turn in resources, repeat.
• Lots of possible ways to play your cards can lead to long turns.