We review Shamans, a trick-taking and hidden role game published by Project H. In Shaman, players are trying to achieve their team's victory conditions each round. 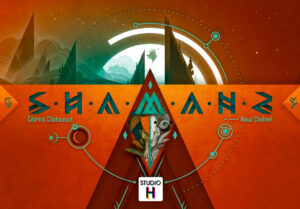 I have always been interested in fantastical stories and characters. Even after I discovered comic books and high fantasy, I was intrigued when somebody created a new setting and characters for me to discover, what new things they brought to the genre, and my imagination.

Shamans from Project H brings players into a world where Shadows are threatening to end the world. Shamans will need to restore balance using magic and rituals. Which side will prevail?

Shamans is a mix of hidden roles with some trick-taking thrown in. Players will play as either a Shaman or Shadow, dealt out secretly at the beginning of each round. Shamans want to identify and eliminate the Shadow players or get all players to play their entire hand. Shadow players want to speed up the game and reach the end of the round tracker, maybe even eliminate some Shamans. The player who earns eight points first is the winner.

Whoever leads the trick, determines what the lead suit will be; all those who follow, can do so, but they don’t have to. This is very counterintuitive for us seasoned trick takers, but here’s why that matters: any cards played that do not match the lead suit will move the round tracker closer to the end. If the end is ever reached before all cards have been played out, then the Shadow player wins three points. However, if the Shaman players manage to either play out an entire hand or eliminate all Shadow players, they will receive two points.

Let’s talk through a hand, because Shamans has a little bit more going on when playing a trick. After the lead player determines the lead suit for the trick, everyone follows however they choose. Those players who play off suit will immediately place their card next to the board under the appropriate matching space, and will move the round tracker one space toward the end of the track. Then, we determine who has the highest and lowest card of the lead suit. The lowest gets to select an artifact. The highest wins the trick and is in charge of placing these cards in their appropriate spaces on the central board. The winner of the trick leads the next, and so on and so forth.

Artifacts are tokens that players who played the lowest number of the lead suit can select. Two are public knowledge and one is kept secret. These tokens may award a player points, allow movement forward or backward on the round tracker, or force a player to reveal their role, even if they secretly draw it. One artifact even helps facilitate eliminating a player. But that isn’t done without a ritual.

Each suit carries with it a special power, or ritual as it’s called in the game. Whoever places the final card or cards to complete a suit will trigger the ritual. This allows that player to gain a point, pick an artifact, move back two spaces on the round tracker, swap roles with another player or even eliminate one. Elimination is however not a foregone conclusion. It requires a dagger artifact. Suppose you are the player that completes an elimination ritual. If you drew a face up dagger, you must eliminate a player. However, if you drew it secretly, you decide whether to use it or not.

If a player is eliminated, they reveal their role. Regardless of their role, eliminated players will not gain any points that round. If they are the last Shadow, then the Shamans win and receive their points. If they are a Shaman, this will be resolved depending on the player count. In a three player game, the tracker moves towards the end equal to the number of cards in their hand. The cards are kept hidden, leaving those rituals unresolvable. In a five player game, the cards are placed in their ritual spaces, but the tracker isn’t moved. Rituals may still trigger if they are completed this way.

As a trick-taking game, the gameplay is different, especially if you know your way around this mechanic. Playing off suit, even when you have a card matching the lead suit just feels weird. That isn’t to say you can’t get used to it by sabotaging a game as the Shadow or when you want to be strategic and eliminate someone. Some people will probably find this satisfying I imagine, the take that aspect.

But something still feels off for me. I think in some ways I am used to the cadence of a typical trick taking game and perhaps I miss that. It doesn’t help that, when playing through hands with new learners, I felt as the teacher that I had to direct who did what in resolving a trick. Reminding off-suited players that they have to place their cards because they might trigger a ritual and to move the tracker and did you move your piece already and then helping on-suited players resolve their trick and did so and so get their artifact and did the person who won the trick place all their cards. It just felt like resolving tricks took longer than I’m used to. I’m sure some of that would resolve with time and familiarity with the game. But I wonder if this process for new players might turn them off to future games.

Let’s address the “hidden role” aspect of Shamans. While hidden traitor/social deduction games aren’t my preference or strong suit, I will say I can appreciate that Shamans is trying to integrate this in a way that doesn’t require players to come up with lies or sus out deception from a stranger through dialog. The timing of your card choices does this for you, whether you mean it to or not. Certainly you can still say it was the only card you could play, which might force a player into card counting to verify whether that’s true during a later hand. I’m certainly not good enough to do that. I’d be curious how this take on hidden role hits for those who like that mechanic. It honestly didn’t change my opinion much.

I will say though, that your role is only going to matter up to a point. In the beginning, those players who you think are Shamans will try and work together. Because we don’t want the Shadow to win! But I think this begins to sour as a player gets close to the eight points needed to win and in a way breaks with the theme, for whatever hold it has. Games may start to be too mean for players or result in dragging towards its ending. Sabotaging and king making could be real realities for players in the end game. For a game that can already drag a little with newer players, I don’t want that.

While Shamans didn’t feel like the smoothest or most consistently satisfying, it does have very nice artwork. The role and suit cards are very mythical and attractive. The cards have symbols to differentiate the suits in the middle of the cards in case someone has trouble differentiating the colors. I thought it was actually pretty cool that each suit features progressive artwork starting from one through eight, where the picture builds upon what was shown before. This was definitely the highlight of the game for me.

Making a game that combines trick-taking and hidden roles is neat, and in a consistently crowded field, I think it’s important and almost needed for a game to do something different, even if it’s just to get noticed. Shamans may have something unique to offer you, but I just didn’t connect with it. As a trick taking game, it felt off and slower paced than other trick taking games. It’s still a very playable game and I’d encourage those who enjoy trick taking to try it. Some people will enjoy the tactics and meanness of player elimination, but I don’t think that will speak to everyone. If new players have a hard time with the game, the teacher will shoulder a lot of directing duties, especially in resolving tricks, where things can drag. This coupled with the fact that players may sabotage and backstab more towards the end and drag out an already slower game, I don’t know that first time players will necessarily want to play again. The artwork is gorgeous though and does an admirable job of conveying the mythical theme of this game.

Final Score: 2.5 Stars – a different and pretty experience that didn’t quite stick the landing

Misses:
• Resolving tricks can drag out the game until new players get the hang of it
• Player elimination/king making/take that may sour game for players