We review Shadow Rivals, an area control and take that card game published by Moaideas Games. In Shadow Rivals, you control your own clan trying to loot mansions and earn victory points. 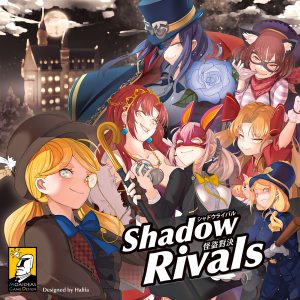 Anytime I see a game with area influence, I absolutely have to play it. I grew up playing games like Risk, so claiming territories is a fun activity for me. It also helps that I haven’t been disappointed by this publisher yet, so I had high expectations between both of those aspects to begin with. We’ll see in my review if I was let down or if my predictions of greatness were accurate.

Shadow Rivals is a hand management and area influence game for 2-5 players that takes about 30 to 45 minutes to play. In my experience, area influence games favor odd numbers and the highest player counts ensure the take-that elements shine. For this reason, 5 players is the best experience.

In Shadow Rivals, you play the leader of a thief crew storming different mansions of varying value and size. At the same time, other rival teams are “infiltrating your turf”, so be the first to get there. You’ll need to take control of the loot, deter the plans of your rivals, and eventually win over the mansion for your own.

Prowess in area influence, deckbuilding and hand management is needed as you improve and use your team of thieves. Some thieves focus on acquiring random loot and others control opponents. The rest can send off thieves from their team to other mansions, which is great because effectively you’ll have two actions at once instead of just the one.

Choose where you start your heist wisely, because each mansion is only so big and has an occupancy limit. Once that occupancy is reached then we go down the line from who was there first to who showed up late to the party. Most of the thieves in this game have immediate effects, while others need to wait until the mansion is full.

The game only has time for seven mansions to be taken over, so once seven mansions are conquered, you’ll evaluate both the points you’ve acquired from mansions, and the loot you grabbed along the way. Some of the loot scoring cares if you’ve outperformed the other factions but, for the most part, you’re just comparing the final scoring against your opponents.

The first blaring complaint I have is about the art. They didn’t need to all be women, or at least characters that present as women, and even if they were going to be women, it shouldn’t have been so objectifying. I suppose anime-style art still has a long way to go in terms of equality and respect.

I didn’t find the need to ever upgrade the skills of any of my gang members. When I did, it was mostly just to see what would happen and not because of an actual strategy. I also don’t understand why you would need to return your advanced thieves back to the market. It’s especially irksome because the symbology on the advanced thieves is even more confusing than the standard thieves. By the time you’ve read the rulebook and figured out what they do, they’re gone. Did they somehow lose their newly acquired abilities or experiences in the chaos of the mansion takeover? Makes no sense to me but at least the advanced cards are sparkly and have that CCG foil prestige.

There are two different sizes of mansions but there wasn’t a situation where I needed to target any of the big mansions to advance my score. It’s even more disappointing that the game favors loot more than it does rose point (RP) cards from mansion takeovers. You’d think that getting an entire mansion would be more lucrative, but it’s not.

The thematic reasoning for some of these characters is also questionable, but I do enjoy figuring out the order of skills when hopping into a mansion with other opponents. However, cards that needed to wait for a mansion to resolve could only realistically be accomplished by one of two things happening: 1) you’ve been left alone to your devices in a mansion no one wants or 2) you want to be at a mansion everyone wants. Being stuck in the middle means you’re down a card from your deck until you can tip the scale in one direction over the other.

At the end of a 5-player game, the delta between scores seems so arbitrary. Those who placed 4th and 5th were close, 2nd and 3rd were also close, but 1st ran away with it with no mercy. It’s an entirely different feel and scoring gap when you play with the minimum count of 2. It seems to be more of a race to guarantee one mansion for yourself at a time rather than keeping your options open.

In Shadow Rivals, you’ll be able to get the excitement of having your own band of thieves doing your bidding without having to actually break the law, but don’t count on feeling like you’ll be on your way to a big time heist. Luckily the game doesn’t take too long so if you didn’t quite understand your loss, don’t hesitate to restart the game because 7 mansions as an end game trigger is fairly quick. The downside is if everyone knows what they’re doing, it really just ends up being a game about throwing down cards and moving on to the next big thing.

If you can forgive the art and practice off-the-cuff short term planning, the high player interaction is entertaining in Shadow Rivals. Immediate thrills from derailing plans of your opponents and the anticipation of securing loot can balance out the battles over mansions most of the time. Honestly you could even enjoy this if you just want to troll the other players and not be in it to win.

Final Score: 2.5 Stars – Be the best short-term planner chief of thieves, hope that your plans work out then move along and eye the next shiny mansion to loot.