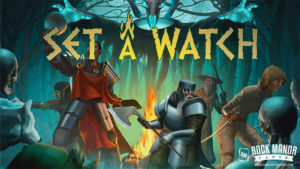 Today we are looking at Set A Watch, a cooperative game now in funding on Kickstarter. In Set A Watch, players will form a band of adventurers traveling throughout a fantasy kingdom. The game centers around the locations in which you set up camp throughout your journey and clearing out the forest creatures, undead, and evil acolytes that attempt to overwhelm you and your camp.

Set A Watch is a cooperative action selection game for 1-4 players. It plays similarly at all play counts and takes about 45 minutes.

In Set A Watch, players will control four adventurers as they travel through various fantasy locations. In each of those locations, one character will take care of camp while the others stay on watch to defeat the dangerous creatures of the realm.

There are a variety of characters that you can play which will be familiar if you’ve played Dungeons & Dragons. The player classes include a knight, wizard, cleric, ranger, and others. You will pick four classes regardless of the number of actual players in the game and each character gets three dice. Some classes will use d6 dice while others, with the potential to do more damage, will use d8s.

The game is played over 9 rounds. Each round players will decide which character stays in camp and the other three will defend that camp from the incoming monsters. The character in camp can take actions including adding to the firewood supply, healing, and scouting ahead to try to avoid any upcoming trouble.

After the camp is set up, the monsters will start to appear. Each location has a special rule associated with it along with a number of monsters that will attempt to wreck your camp this round. Cards equal to that number are lined up face down and the adventurers must defeat as many of the creatures as possible. The number of monsters revealed is based on the amount of firewood in the camp, but will range between 1-3. The more creatures you can see at a time the better, as you’ll have additional information to go on.

Some monsters have abilities that trigger when they are revealed or when they reach the front of the line. This can make it especially dangerous to let your firewood get down to the point you can only see the first monster as you won’t be able to mitigate possible “front of the line” effects.

The dice aren’t your only weapon to defend yourself though. Each character has five special ability cards, three of which are available at any time. You can spend a die to activate one of those abilities. You can even further exert yourself by exhausting a used ability (by flipping it over) to take the action an additional time. However, these ability cards are also, effectively, your hit points. When monsters aren’t defeated in a round they will do damage to you, exhausting additional cards.

You will lose the game if all of your heroes become completely exhausted. If you make it to the final location you will face more foes from the monster deck as well as any monsters that you weren’t able to defeat during all of the previous rounds. If you manage to make it out of that last encounter alive, you win!

Set A Watch takes a fantasy setting and turns it into an interesting cooperative puzzle. Each round you have to communicate with your fellow players trying to find the more efficient way to dispatch the enemies you face. The fact that the amount of firewood you have in your supply impacts how many monsters you see at a time really adds a clever element of hidden information to the game.

Each character also plays quite a bit differently. Melee characters can only directly attack whichever monster is in the front of the line, while ranged characters can hit any of the first two. This makes it vitally important to not use your ranged dice too early as you need to be able to prevent some monsters from reaching the front and wrecking even more havoc. The special abilities are all extremely powerful and the ability to exhaust them for a second use during a round, at the expense of it being available in the future, makes for some really difficult decisions throughout the game.

Because you will always use four characters, Set A Watch scales pretty seamlessly between 1 and 4 players. The solo mode allows you to make all the decisions and gives you no one to blame at the end but yourself. Even though 3 players is potentially an awkward count with 4 player characters—since one stays back in camp each round you’ll still all have exactly one character to control during the battle.

Finally, as is always a concern with dice-based games, there is quite a bit of luck involved here. Fortunately there are some powers to mitigate bad rolls. You can also make sure to send whoever rolled the worst to camp during the round, making their bad rolls less impactful. Each character does have to rest twice, so later in the game you’ll have less options on who to keep back. You can also use your low value dice to activate your special abilities as they don’t really depend on the die’s value.

If you are a fan of fantasy themes and co-op games, you should check out Set A Watch. It feels more like a puzzle than most other cooperative games. There is little in terms of overall tactics as you just have to deal with the pressures are hand, keeping in mind the unknown monsters still trying to enter your camp each round.

The unique characters and locations give Set a Watch a lot of replay value and it works really well as a solo game if you just want to kill some time on a lazy evening or before the rest of your game group arrives.