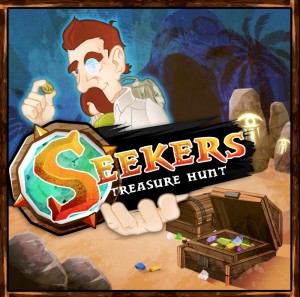 I watched all the Indiana Jones movies excessively while I was growing up. This caused me to dream about being an archaeologist finding that next great historical find. It was quite a shock to me, after I did some research about being an archaeologist, that the job wasn’t exactly how they depicted it in the movies. Weird, right? Like most of my outlandish childhood dreams, it will never come true, but I have board games to help fill that void. In Seekers: Treasure Hunt, currently in funding on Kickstarter, players take control of two explorers looking to discover the lost treasure in the desert before the other players. Lets explore and discover (see what I did there) what this game is all about.

Seekers: Treasure Hunt is a game of exploration and discovery that plays with 2-4 players in about 40-60 minutes.

In Seekers: Treasure Hunt, players are off to explore a desert known to hold an extraordinarily valuable buried treasure. Each player will control two archaeologist, each with their own special ability, attempting to find clues to the treasure’s location at the four eye stones in the area. Players will use player and treasure cards along the way to assist their quest or to hinder their opponents. If a player is able to dig at the location revealed by the four eye stone cards, they are the winner and claim all the spoils.

The game board is a 20 x 20 grid with a majority of that being open spaces that the players have to cross. Four of the spots are the eye card locations where players will be able to look at one of the four cards that are selected at the start of the game. These cards eliminate rows until only one square of the 400 is shown to be the location of the loot. Sixteen of the other spaces are treasure chests that allow players to gain cards that are more powerful than the typical player cards. At the start of the game, players will draw two archaeologist character cards, each with their own special ability, such as diagonal movement, drawing more cards and other things that will help during the game. Each player gets three playing cards that they can use on their turn to help their search, slow their opponents, or protect them from opponents attacks.

Each players will complete three phases on their turn.

1. Draw a Card – Select a card from the playing deck

2. Activate Character Abilities, Move, or Play Cards
These can be done in any order. All character abilities are very useful and players will want to get their special actions activated. Each player is able to move each of their character markers 1 space forward, backward, left or right. If they happen to move onto a treasure chest location that has not been claimed, they gain a treasure card. If they move onto one of the eye stone spots they can look at the card associated with that space.

3. Discard cards
Players may only have three playing cards and two treasure chest cards in their hand (unless their character card allows them to have more) at the end of their turn. They must discard down to these numbers and the next player can take their turn.

Once a player has gone to all four eye stone locations, they now can move one of their character markers to that location and dig at the start of their turn to win the game.

There are a lot of interesting concepts in this game. When I read through the rules, the first thing I was drawn to was the eye cards being used to show the final location of the treasure. It might not be groundbreaking to have the cards, but I just like how it connected you to the theme. Each time you managed to view another card, you were putting another piece of the puzzle together. It might not be the same as using the headpiece of the staff of Ra to locate the Ark of the Covenant, but it is a fun element to the game. The other thing I wasn’t sure about was allowing each player to control two separate character markers and move them around the board. I thought this would become confusing and unnecessary, but I was wrong. Have the two markers allows you to spread out and search the area much more quickly. I don’t think I would enjoy the game as much if you only controlled one character.

The game is very fast paced and easy to learn. Most turns are completed very quickly and there isn’t down time for players. The character cards special abilities add some nice variability between your characters. One might allow for more movement, holding more cards, and ways to counter or move other players. Some of the cards are more powerful than others, but that power is negated by the use of dice rolls. Some of the special powers only activate when a eye symbol is rolled, allowing for the character powers to be much more balanced. The only other major mechanic in this game is the card playing. Player and treasure chest cards are played almost every turn and allow for the most action and momentum swings in the game. Treasure cards are super powerful and are worth spending a few rounds reaching their location.

The game does suffer when one player gets out in front and the rest of the players gang up to hinder that person’s actions. However, this issue is somewhat negated by the plethora of counter cards in the game. This allows for most attack actions to be blocked and allows for the person in the “lead” to protect themselves. It’s always good to have at least one of these in your hand later in the game. This leads the game to have a high level of player interaction that will keep players connected to the game. Overall, we had a very fun time playing the game. Most games ended with a very tense race for the last eye marker or location of the treasure.

What I love about Seekers: Treasure Hunt is that it connects with the theme. The searching for clues, characters having different strengths, finding other treasure and using cards to affect the game work so well together to create a very fun game experience. The game mechanics are simple to learn and able to be enjoyed by anyone.

If you want to go find some buried treasure, consider giving Seekers: Treasure Hunt your support. If you are interested in the game, it’s currently funding on Kickstarter and scheduled for delivery in Feb 2014. A pledge of $29 will get you a copy of the game and any stretch goals. You have until Monday, January 6th to become a backer so head over today if you are interested.