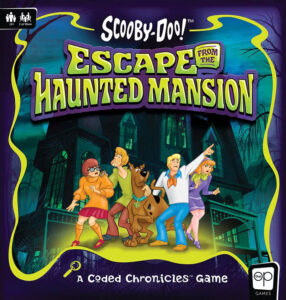 As a 30-something with a child, I sometimes get into weird discussions about animated television shows. I bemoan the days of watching Paw Patrol and Team Umizoomi. Back in my day, we had much better shows… like Tiny Toon Adventures and Rugrats.

Then you got old people that will come in and talk about the days of The Flintstones and The Jetsons.

Scooby-Doo, however, is something that unites us. From its initial series in 1969 to its multiple reboots and films, Scooby-Doo and the gang have been enjoyed by kids and kids at heart for decades now. And today we are taking the role of that gang, hopping in the Mystery Machine, and going to try to solve a mystery in Escape from the Haunted Mansion.

The gang is driving along and, of course, the Mystery Machine malfunctions. You find yourself in Lady Fairmount’s mansion and you must try to escape. If you’ve played any escape rooms board games (or actual escape rooms) the setup here is pretty familiar. But rather than being app-based or have a deck of cards, Escape from the Haunted Machine comes with a few narrative books.

So when you enter the game you’ll have map tiles with three-digit numbers of them. If it looks like something you would want to search, you’ll grab Velma’s narrative book and look up that number, with a 1 in front of it. So, for example, if there is a picture on the wall with the number 123, you’d look up the number 1123 to have Velma research it. Or 4123 if you just want Scooby to smell it. These entries may give you a lead to something else. Or instruct you to open up some of the game’s hidden envelopes, revealing puzzles and such along the way.

There are hints for each room you can reference in the manual if you ever find yourself stuck. And a score tracker (Scooby Snacks, obviously) that can give you a final rating on your mystery-solving abilities.

The coded chronicles system of using narrative books is really the star of the show here. I appreciate that most of the other escape room games offer similar puzzles through mobile apps, cards, and traditional board game “pieces”. But this system allows a much more narrative experience where the game really can take full advantage of the intellectual property is it using.

And that is really what happens here—you feel like you are in an episode of Scooby-Doo. There is a narrative arc to the whole thing you don’t get in most small-box escape room games with some pasted on theme. You can have Shaggy try to eat everything, and the narrative book is oftentimes going to tell the repercussions of doing so. These characters that we are all so familiar with feel like reasonable representations of those characters.

Since each book is separate, if you have multiple players you can give each a character to control. This really can be fun to have players take on a specific role and keep players engaged, looking for an opportunity to use their ability.

That sweet narrative would be wasted if the game’s puzzles weren’t fun. Fortunately for us all, that isn’t the case. The puzzles generally felt lighter and ranged from easy to maybe medium. It makes the game work well for families (my 7-year-old helped at times) but still thoughtful enough for the adults to have to do some thinking here as well. Of course, the difficulty of the puzzles is pretty subjective, and as we’ve done more than a few escape room games those experiences no doubt helped us be successful.

But the puzzles are more than serviceable and that’s all that Scooby-Doo: Escape from the Haunted Mansion needed. The story does the heavy lifting. I assume it’s basically impossible that everyone in your family doesn’t have familiarity with the Scooby-Doo franchise. This game feels like it’s just an interactive episode you’ll be sniffing, eating, and solving mysteries around the table.

Similar to the Unlock! series, you can’t really play through the game again once you’ve solved the puzzles, but you can restore things to their original state and pass it on to another family of gamers to enjoy.

I’ve played a fair number of escape room games at this point, and Scooby-Doo: Escape from the Haunted Mansion is among the best. The coded chronicles system allows for a really in-depth narrative that serves the Scooby-Doo franchise well. The characters really feel right from the show. Even the NPCs seem like they would be right at home in the Scooby-Doo show. The smart writing is supported by fun puzzles that are simple enough for the family but still present an occasional challenge.

This box is a one-time play at a $30 price point. But from beginning to end you’ll likely be playing 3-4 hours (you can easily save in the middle). It’s non-destructive so you can pass it along and really get your money’s worth from the investment.

Final Score: 4.5 Stars – One of the best escape room implementations; perfect for families.

Hits:
• Great story makes perfect use of the Scooby-Doo brand.
• Narrative books can be shared so each player can take a role.
• Puzzles are fun and not overly complicated.

Misses:
• Price point is pretty high for similar games, although it is longer.