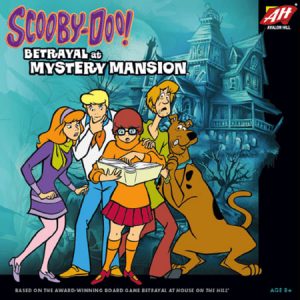 Scooby-Doo is one of those TV shows that almost everyone knows, even if they haven’t watched it before. I always liked Scooby-Doo because of the endings. I loved figuring out who was behind the mystery and why they did it. Now, in the gaming world, we have Scooby-Doo! Betrayal at Mystery Mansion, an asymmetric adventure family game that takes place in the Scooby-Doo universe.

The game is for 3-5 players and is about 30 minutes long. It’s a retheme of Betrayal at House on the Hill which is a more classic horror-themed version of this game. However, I think Scooby-Doo fits as a great theme for this game because it feels like you are inside an episode.

The board is laid out into two parts—the “outside” and the “inside” of the mansion. There are 2 stacks of room / area tiles that correspond to the different environments. Each tile has 3 main parts: 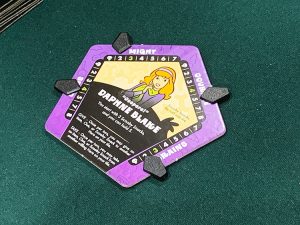 At the start of the game, each player chooses a character to play. Each character has four stats: speed, might, brains, and courage. A character’s stats will be used when making dice rolls to perform tasks.

On a player’s turn, they can move a number of spaces equal to their speed. If a player moves into a space without a tile, they end their movement and draw a tile. They then draw a card noted on the tile, and resolve any special effects listed on the tile.

There are three types of cards, item cards, clue cards, and event cards. Item cards are kept and can be used for special one-time effects. Event cards are immediate one-time effects that may affect more than one player. Finally, clue cards are kept, but give ongoing abilities. In addition, any time someone draws a clue card, they make a Haunt roll. They roll dice (dice sides are 0/0/1/1/2/2) equal to the amount of clue cards that are already revealed, and if the roll is higher than five the Haunt begins. 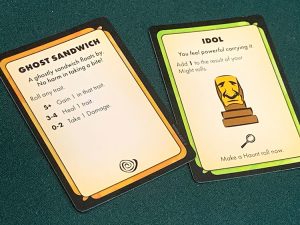 The Haunt is the main part of the game. The player who rolled over five becomes the monster! The monster will read a specific page of the “Monsters Tome” book, which will explain the rules of the Haunt. Also, the rest of the gang will read another book, titled “Secrets of Survival” which will teach them their new win condition. One important thing is that the monster doesn’t get to know the actions or the win condition of the gang, and vice versa.

A common win condition for the gang is to ‘stun’ the monster. They can usually do this by making a might roll when in the monster’s space, but the Haunt rules might say otherwise. The monster might win by placing special tokens on the map.

The Haunt also comes with a paragraph that explains the background of the episode. This is similar to actual Scooby-Doo episodes too. 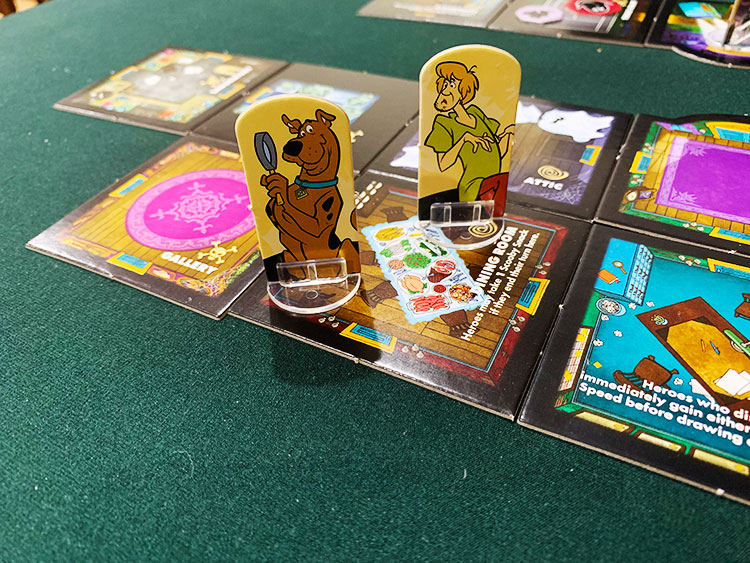 This is a great game. The Haunt makes for a good twist that leaves the players wondering what will come next and playing as the monster is always lots of fun because you get your own rules, changing up the game for you. The fact that the map is built randomly each game helps make for a unique experience each play. The replay value is further increased because there are 25 different Haunts and multiple mission cards that randomize things.

Another selling point for this game is it’s simplicity. The game accommodates for all kinds of players. Families with small kids will love this game, especially if they like Scooby-Doo cartoons. 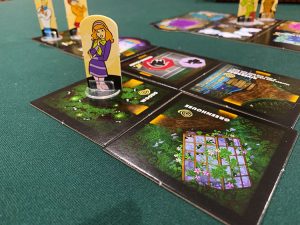 However, there are a few things about this game that I wish were better. The first half of the game before the Haunt is almost the exact same every time which makes for a poor exploration experience. Also, if the Haunt happens too early or too late, it can throw off the gameplay, and give too much of an advantage to a specific side.

I’ve also noticed that some Haunts can be extremely simple, with only one action that the Gang can do, and most Haunts have the same win condition for the Gang, which makes playing as the them less interesting than playing the monster.

I very much enjoyed playing Scooby-Doo! Betrayal at Mystery Mansion. It reminded me of when I used to watch the Scooby-Doo TV show. This game is great to play with family or with new or inexperienced players, no matter their skill level with games. If you enjoyed games of Betrayal at House on the Hill and Scooby-Doo, this is a must buy game to play with friends and family.

Final Score: 4 Stars – A good family game, but some mechanics could negatively shift the gameplay.

Hits:
• The Haunt is a good twist to the game
• It’s fun to play as the monster and have your own rules
• Simple mechanics that are good for families

Misses:
• The game before the Haunt is very similar every time you play
• The Haunt is sometimes unbalanced