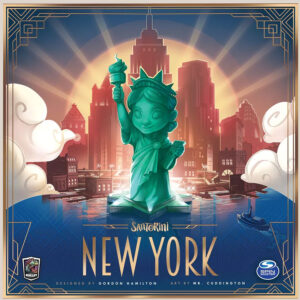 Did you know Santorini is in Greece? A beautiful island with iconic blue-domed cubiform buildings lining the coast of the Aegean Sea. What does that have to do with New York? Not a single thing. But Santorini was also the name of a very popular 2016 abstract game that has now been transformed and relocated to Manhattan.

Does this make Santorini: New York in line for least sensical board game titles ever? No question. But you are likely more interested in how it plays, how it’s different from the original you know and (maybe) love, and what I think about it so I guess we will discuss that rather than a geography lesson.

Santorini: New York, despite the name, is a much different experience from its namesake. The game is set up choosing four roles and shuffling their cards together to form a deck that all players will use. Each role provides a different special ability and each card reflects both the role it belongs to and a number. Every player gets a hand of five cards and simultaneously chooses one to reveal.

Once revealed, whoever plays the highest numbered card takes the Statue of Liberty figure. This is key as you cannot win the game unless you are holding the statue. But then players take their actions from lowest number played to highest. Generally speaking, your actions are the same as the original game: move one of your two workers to an adjacent space and then build in a space now adjacent to that worker. You must move carefully because if you can’t move either of your workers one is removed from the game entirely.

When you build, you add a level to the space regardless of its current level. So if nothing has been built you build the first floor. If it’s one or two stories tall you’ll add a floor. If it’s already three floors you’ll add a roof, effectively blocking it for the rest of the game. When you are moving, you can climb up one floor from the level you start on or fall any number of floors.

The role card you play, however, will change your options slightly. For instance, if you play the ironworker you get to build twice after moving and the subway operator lets you move more than one space in a straight line, stopping at the first unoccupied space. Each game will have one role that changes the movement rules, one that changes the building rules, a specialist that adds some interaction between players, and the engineer role that is always included. After you’ve played four rounds, you keep your remaining card and draw back up to five cards.

When you play an engineer you also must add a skyscraper to the board prior to moving. The skyscrapers must be placed on an empty adjacent square and block that space from being moved through or built on in the future. There are three ways to win a game of Santorini: New York—stand on the third level of a building while holding the Statue of Liberty, add a roof to a building while holding the Statue of Liberty if you’ve played an engineer card this turn, or be the only player with workers remaining.

I really loved the original Santorini. While some may balk at calling it an abstract since there were lots of different asymmetric player powers, it was pretty close to an abstract game and packed a lot of depth of strategy into a very simple ruleset. The New York version takes a big step away from abstract mechanisms to a card driven system that is more tactical and random, but also allows for a lot more variety. It also allows for better gameplay with more than two players, supporting up to five.

That variety is achieved through the role cards. Three different movers, five different builders, five specialists. So, based on my googling of how permutations work, that is 75 different possible combinations. Each distinct combination of roles gives the game a slightly different feel. None of the roles is necessarily game-breaking though so it’s a lot to explore but it’s more of a tweak to the systems rather than a new experience.

There are a lot of comparisons of New York to the Greecian version and I just think they couldn’t be more different. New York will have you bemoaning the draw from the deck and having to change plays every four rounds when you get a new set of cards. For most of the victory conditions you have to have a high card to be able to claim the Statue of Liberty, so keeping them for the right moment is crucial. The original no luck, thinking multiple moves ahead, and knowing what options your opponents have is gone. It’s more guesswork and hoping.

Not to say that’s not fun, I’ve had a good time playing Santorini: New York. Trying to guess what actions other players want to take and trying to time playing your high cards at just the right time is really the metagame within the game. Sometimes you’ll play a low-ish value card trying to build toward playing your high cards later and end up getting the Statue of Liberty when you least expect it. Of course, it doesn’t do any good if you can’t win that turn, but it may change your plans unexpectedly.

The game also, very much like the original, looks great on the table. The plastic building pieces look great and are functional to read the situation at any given time. They aren’t quite the impressive level of the original but certainly better than most games, especially considering this version is aimed for more of a mass market appeal.

Santorini, the original, owed a lot of success to just being a tight and very well produced abstract game. Santorini: New York’s production is a little worse and the gameplay is a little more random. But it stands up ok on its own, without having the lean on its predecessor. New York is an altogether different experience where you have to embrace more randomness and try to use the special abilities of each role to their fullest potential.

My biggest concern is that I’m just not sure who wants this type of game. Abstract games are generally defined by having no or very low luck. Santorini: New York keeps a very abstract-like game and set of win conditions and just piles randomness on top. It’s one of those games that is entertaining to play but may just not be something you clamor to get to the table and is unlikely to be anyone’s favorite game.

Final Score: 3 Stars – A good hand management game with a lot of variety. If anything, it just lacks some kind of punch to make it more interesting.

Hits:
• Lots of variety in role cards
• Supports up to 5 players without adding much downtime

Misses:
• Rely on drawing high numbered cards to meet winning conditions.
• Not entirely clear what type of gamer this really is for.