Board Game Review by: :
Kit Harrison

We review Santa Monica, a card drafting and action optimization game published by AEG. In Santa Monica, players are trying to earn the most points over the game's 14 rounds. 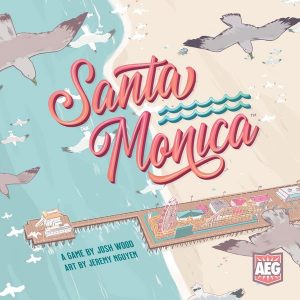 I had just gotten back from a weekend in Los Angeles visiting friends when I saw the announcement for Santa Monica on the AEG webpage. The artwork and the look of the game immediately grabbed my attention because of how well it captured the overall vibe of the place. In the ocean-front community of Santa Monica, laid-back locals somehow coexist with tourists rushing from the shopping strip to the beach and back again.

Published by AEG and designed by Josh Wood, Santa Monica is a tableau-building, card-drafting, action-optimization game for 2 to 4 players that takes about 45 minutes to play. The game plays well at all player counts, although 2 or 3 is ideal.

In Santa Monica, players each create their own tableau that displays a section of the beachfront boulevard and the wide Santa Monica beach behind it. Players take turns selecting cards to place in their tableau, gaining resources, and opening up opportunities for scoring. The street cards are placed across the front row of their tableau, and the beach cards must go in back to complete the scene. Players start off with a central tile that gives you a bit of direction for your strategy, but other than that, the game is wide open.

Players draft their cards from a central display of two rows. Only cards from the front row may be taken and when they are, the card behind it slides down to become available for the next player. There is a simple mechanism that steers players toward certain cards by giving extra bonuses and a couple of ways to spend your “sand dollars” to break the drafting rules a bit, but beyond that, turns are very straightforward. Pick a card, put it in your tableau. The hook of this game, however, are the meeples that show up on your cards. You will need to usher them to various sites where they can grab a bite, have fun on the beach, or otherwise enjoy themselves while earning you points.

The game ends after someone has placed their 14th card. After the round is finished, players are awarded points for end game scoring and the player with the most points wins.

Santa Monica is a joy to behold. The graphic design by Brigette Indelicato is quite good and immediately clear. The iconography of the game is intuitive, unobtrusive, and does a fine job of conveying the action of the cards in just a few small illustrations. The artwork on the cards, by skilled cartoonist and relative newcomer to boardgames Jeremy Nguyen, is detailed, delightful, and thematic, and so well done that it almost renders the iconography redundant. The two of them made a tremendous team. The wooden components are fun to play with, thematic, and round out the overall look of the game.

I loved the interlocking decision points that Santa Monica presented. Creating a nice balance of street and beach, people and activities, resources and scoring is what this game is all about. Some cards, like shops, want to be next to each other. Other cards, like a local hangout and a tourist trap, want to be far apart. Some cards will give you stuff like sand dollars (the currency of the game) as well as meeples representing locals and tourists. Some cards let you move those folks around. The action of this game centers around how you make it all work. Too many people and nowhere for them to go? Bad news. Too many empty picnic tables and volleyball courts with no one to visit them? Also not good.

Santa Monica is one of those “make the best moves with what you have” games. There are only 4 cards on offer at any given time so no matter what strategy you pursue, you have to be flexible. Not only that, only a fraction of the cards will see the light of day in any given game, so you can’t really wait around for a particular card or even a particular kind of card. In my mind, this is a good part of the appeal of this game, especially for two players, where I think this game’s sweet spot is. One scoring mechanism that is always available for players is to move the green VIP meeple across the type of cards indicated by your starting tile. It’s a fun touch in the game—who doesn’t love going to a spot that the celebs have been to!

Scores will be variable and a losing score in one game might be enough to win in another, as ideal combinations just might not show up. Then again, the next game you play everything will seem to click. Depending on your approach to playing games, this might be frustrating or interesting to you. There is a strong “I need that card!” mentality in Santa Monica that creates tension and is quite enjoyable when it favorably resolves.

One clever design choice that was enjoyable as well as thematic is the bonus movement of all your meeples at the end of the game. Once the last cards are placed and the game is almost over, all the players have a final chance to move each of their meeples. The effect of this rule encourages players to leave the locals on the card where they appear (as they’ll often be able to reach their destination on their bonus movement alone), whereas with the tourists you are frantically trying to scurry them around to the various scoring sites every chance you can get. It’s an interesting dynamic that really brings Santa Monica to life.

There seems to be a trend in popular card-driven games such as Wingspan and Terraforming Mars where there are far more cards than you are ever likely to see in a game. I generally enjoy this dynamic in a game, as it tends to create a less predictable game environment that players need to react to. Santa Monica doesn’t have quite as many cards, but the general idea is there. All in all, Santa Monica is an excellent casual game for a wide variety of gamers. It’s a compelling puzzle for folks who really want to duke it out, but at the same time, it’s an inviting gateway game that you might purchase as a gift for someone relatively new to board games.

For me, I put Santa Monica in the category of “relaxing games” where a lot of the satisfaction of the game comes from creating and mentally inhabiting the tableau in front of you. But behind this delightful facade is a puzzley head-scratcher where you are clawing for points, trying to out-think your opponents, and hoping you can grab that fifth “shopping” card to complete your string before someone steals it from you!

Final Score: 3.5 Stars – Solid, simple, thematic game with delightful artwork and a lot of unique elements that should find a spot in a lot of board game collections

About the Author: Kit has been playing Sid Meier’s Civilization on PC since about 1995. Then in 2012 or so, his younger brother introduced him to the Fantasy Flight game based on the same, and his mind was effectively blown. Within hours of playing, Kit was already looking up Civ on the internet, finding BoardGameGeek and the next thing you know there are multiple shelves full of board games—how the heck did that happen?! Kit enjoys all sorts of games, heavy euros, auction games, dice-chuckers, card-driven games, co-ops, train-games, dungeon-crawlers, abstracts, wargames, and just about everything else. Kit loves playing games with his wife and 4 children and is thankful for such a great group of gamers! He still plays Civ on the PC.