Board Game Review by::
Andrew Smith

We review Rorschach, a party game published by Pegasus Spiel. In Rorschach, the game is divided into two teams and players will need to guess which word goes with which ink blot. 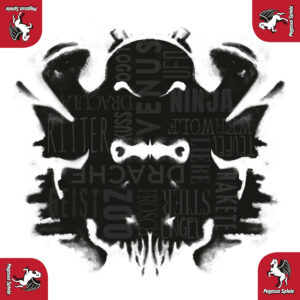 In 1921, Hermann Rorschach wrote Psychodiagnostik outlining his studies on mental patients and how they responded to being shown 10 meaningless inkblots. While these days we associate the Rorschach test with Internet personality quizzes or board games they were initially developed to diagnose serious mental illness.

Even to this day how effective of a tool they are is up for debate in professional psychiatry. Luckily for all of us, I’m very much untrained when it comes to psychiatry but I am here to tell you if it’s a fun way to spend some time with your friends.

Rorschach is a party-ish game in the same vein as the ever-popular Codenames. The round begins by drawing inkblot cards from the deck. One player on the active team (which the rules refer to as the test team) will then draw three word cards. They will secretly pair each word to each inkblot.

Then the remaining players on the test team will try to guess any of the matches correctly. After choosing, but before the test subject reveals if it is correct, the other team (the control team) can either agree or disagree.

On the second attempt, the control team doesn’t guess. And the test team gets the point if it’s right and doesn’t if it’s wrong. Simple.

Then the control test and test team switch roles. Play continues until one team has 4 points and is ahead by two points.

There are now so many games on the market where someone knows something that they are trying to get their team to guess. Codenames. Wavelength. Decrypto. Mysterium. It’s a crowded arena without a doubt.

You may think it’s the convoluted scoring. There is an actual flow chart on the back of the rulebook. Ultimately though, after a couple of plays, it isn’t that complicated—if one team is right, get a point. If not—no points. If the test team is right try for one additional match. But… it speaks to the inelegance of the game as a whole.

There is almost no room in Rorschach for a player to do something clever. And maybe that just boils down to the fact that looking at an ink blot and relating a word just isn’t a really fun experience. It would be one thing if you had a stack of words from which to choose. But you don’t. There are three ink blots and three words. In fact, the round actually starts with four ink blots and the control team gets to remove one to make it even less interesting.

The result is that in most rounds there is either a choice that feels pretty obvious and both teams will guess it and it will get discarded completely, or there is no obvious match and it feels too much like just taking a random 33% chance at getting it right.

I guess what it comes down to is that way too often the round ends with a conversation that goes something like this:

Test team: “Why in the world did you match that word with that picture?”

Test subject: “I don’t know I had to pick something, that’s how this game works.”

It’s a neat idea. Rorschach inkblots are, by design, meaningless, and guessing how your teammate assigns meaning has to be fun given the right setup. But ultimately I think the game fails by having too limited of choices and scoring that just doesn’t create a lot of fun moments.

Given the glut of games available that do something similar, it’s hard to recommend Rorschach unless you are a budding psych major who just loves ink blots.

Final Score: 1.5 Stars – Too many random decisions and guesswork. And scoring that often results in no points awarded is quite a letdown.

Hits:
• It’s a cool idea.
• Well produced with nice markers for teams to use to guess. 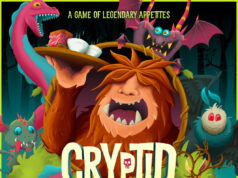 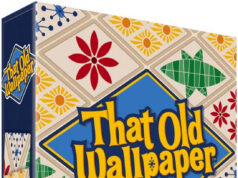 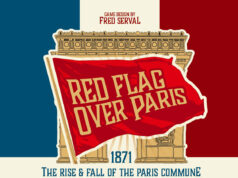