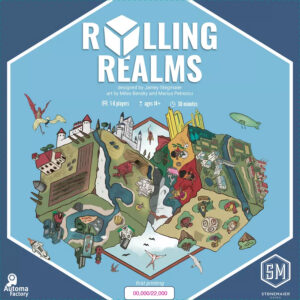 Rolling Realms is a game for one or more players that Jamey Stegmaier released as a print and play that allowed people to play a game over video conferencing last year during the pandemic. In 2021, Stonemaier Games is releasing it with components for up to 6 players featuring the name/theme of one of the games in Stonemaier’s catalog.

There are also PDFs of the components on boardgamegeek.com if you want to have more players, play with people remotely, or are a cheapskate.

A game of Rolling Realms is split over three rounds using three cards representing three different realms. Each round is split up into nine turns that consist of one player rolling the two chunky dice and then everyone using those numbers to complete objectives and gain resources on their cards.

That’s pretty much it except Tony told me I couldn’t submit a 140-word review.

Rolling Realms has you play three rounds of three mini games simultaneously trying to maximize your points by collecting resources and spending them to manipulate the values shown on the dice, gain extra dice of various values, etc. This makes Rolling Realms a pretty straight forward puzzler

There is also a solo mode that takes you through 18 specific combinations of these cards with some special rules. The version is called Solitaire Miniature Golf and you get 4 chances to succeed before you write down your score of 5 for that hole so you don’t hold up the people playing behind you. Par is 36 for the 18 holes.

I should tell you about the resources you’re going to gather. There’s pumpkins, hearts, and coins and they provide benefits as detailed below:

If you can’t use a die, you can gain a resource of your choice, but you probably don’t really want to do that too often.

There are 11 realms in Rolling Realms, each of which ties to a different Stonemaier Games title. Each realm features a unique mini-game that will change up the gameplay a little. For example, in the Viticulture realm, you use a die to gain grapes and a resource or use the number combined with the value of one or more previously collected grapes to collect a wine order of the same or lesser value. Each completed wine order is worth two stars. At the end of each round sum up the stars collected and add 0.1 for each resource left on your player card. After three rounds sum your scores and the highest score is the winner.

If you want to see how the rest of the realms play, you can download the print and play and check it out.

Rolling Realms, as a game with no real upper limit on player count, is essentially multiplayer solitaire as each person’s attention is on their cards, their resources, and their puzzle. And each player’s cards will evolve differently over the turns based on their own good and bad choices. There’s no interaction other than giving the person who rolled two’s again a hard time because you can’t do anything good with that roll. I felt like everyone was just staring at their own cards and not really paying attention to each other—which is exactly how most video conferences feel.

And it works well as people can focus on becoming the master of their own dominion, err realms. Where the game stands out, and the solitaire mode shows it off spectacularly, is the variety from the combination of the cards and how that puzzle changes the feeling of the game. And as I repeated holes on the solitaire course due to not meeting the set objectives, I felt like I was improving with every attempt at each specific puzzle. And completing each goal did provide a feeling of accomplishment.

Most cards are coated, and dry erase markers wipe away cleanly while the miniature golf card is just cardstock as I’m assuming that’s meant to be played over multiple play sessions. If you get through it three times and are still jonesing for more there’s a downloadable version on Stonemaier’s website. It’s also perfect for those who can’t bear the thought of writing on game components (as I look in the mirror and wave).

My biggest gripe is that the rulebook doesn’t provide a ton of examples for how each card plays. While nothing is ultra-complex, it took a few times reading some of the cards and the rulebook to fully grok how they work. Adding some more examples, like they did for resource utilization, for each would’ve been helpful.

And just like there’s a board game for everyone, I think everyone will have their favorite realms. I really like Tapestry for the spatial puzzle, Pendulum for the push your luck element, and Between two Castles for the combination of resource gathering and scoring while trying to place numbers that won’t shoot me in the foot later. But there isn’t a realm that I look at and grumble, “oh, you again” which is a testament to the overall quality of the realms.

Rolling Realms provides an engaging and variable puzzle to solve. This is still a game that can be played over video conferencing or at lunchtime with co-workers without the need for a lot of fancy components. With it being available for free online, I’d argue the two best reasons to buy this is 1) you already love it and want to support Stonemaier and/or your FLGS and/or 2) You want to say thank you to Jamey Stegmaier for making this for our hobby when we didn’t have a lot of other options during the craptastic year that was 2020.

Final Score: 3 Stars – Rolling Realms is a solid game made up of mini-games, but limited player interaction and theme holds it back from greatness.