We review the dice rolling board game Roll Through The Ages, published by Eagle-Gryphon Games. In this easy to play game, players are trying to advance their civilization through the use of dice rolling. 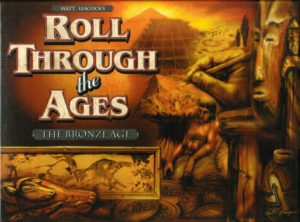 What’s the newest game?? What’s on KickStarter?? Why doesn’t Arkham Horror have 11 expansions yet?? Rush. Rush. Rush. Need new game. Must have the latest.

There are good games that were published before 2015 and are currently available at your FLGS, LGS and OGS. Acronyms make me feel elite.

I present you: Roll Through the Ages: The Bronze Age. Originally published in 2008 and designed by Matt Leacock (of Pandemic fame), the game was recently reprinted. And it is a good game.

Note: This review is for Roll Through the Ages: The Late Bronze Age, which is a combination of the base game and an official print and play expansion. Going forward, I will abbreviate the game as RTtA.

RTtA is a dice rolling game for one to four players who are competing to build the best civilization in the history of humanity. It is a more complicated gamers version of Yahtzee, rerolls and all.

The game base game takes 30 – 40 minutes, but increases to 45 minutes to an hour with the expansion. The extra time that the expansion adds is more than worth it as I will explain later.

The components for RTtA were functional.

I felt the following were average:

RTtA is played over an undetermined number of rounds in which every player has one turn. Each turn is made up of the following six steps:

The game continues until either all seven monuments are built or until one player buys seven developments. The round in which the end game is triggered is played out so that every player has the same number of turns.

The player who earns the most points is the winner!

I liked RTtA. It is a nice take on Yahtzee!, but with more game and meatier decisions.

The biggest draw for me was the die roll mechanic combined with the decision making needed for each roll. Every die in the game is the same and provides one of the following results: three food, one good, two food OR two workers, seven coins, two goods AND a skull and three workers. Skull results lock that die and prevent it from being rerolled.

As you can see, the fastest way to get more goods is to roll skulls. One skull does not penalize you; however, two or more will, with the exception of three skulls, which actually impact your opponents! That being said, some negative results, such as two skulls leading to Drought, can be offset by developments like Irrigation. This push your luck mechanic helped make this part of the game so fun for me.

How you handle collecting goods is another push your luck mechanic that I enjoyed. There are five different goods on your pegboard. This is important because goods are collected in that specific order. If you roll two goods, you would collect one wood and one stone. If you roll four goods, you would collect one wood, one stone, one pottery and one cloth. What makes this interesting is that each time a good is collected, it value goes up. The rarer the good, the more it increases in value.

So how is good collecting push your luck? You can only keep six goods total on your pegboard. In my experience, it becomes an act of balancing goods and knowing what to keep.

You can spend goods, along with coins, to buy developments. Unlike coins, goods remain on your peg board even if they are not spent (coins are lost at the end of the turn). But spending spearheads and cloth allow you to purchase the more expensive and powerful developments.

Developments provide the biggest civilization building feel to the game. You can’t get them all, as having seven of them triggers the end game, so you need to choose wisely. Some will combo well with others. Some simply generate more points. The more powerful the ability, the more expensive it is (except for Shipping, see below). I appreciated trying to determine which developments I should pursue as when to buy them. Since you do not get change when exchanging goods for developments, it is important to purchase the developments you want for as close to their cost as possible.

Finally, trying to balance growing your civilization versus making sure you have enough food for your cities is another one of the decisions that made RTtA fun. Players start the game with three cities, each one granting a die to roll. They also require one food each turn. Want more dice to roll? Build more cities. That’s GREAT, except now you also have to collect more food. And every food you are short is a negative point, so growing to quickly without a way to mitigate the risk of additional skull rolls could lead to a significant negative impact on your final tally.

I did have some issues with RTtA. The expansion addressed many of these, but in doing so increased the playing time. I personally do not mind the longer playing time as I feel the old end game came too quickly; however, if you feel this game is taking to long for what it is (up to an hour if you have AP prone players), you may not find this game as enjoyable as I did.

I also found trading to be, for the most part, useless. While it promises interaction, my experience has shown that it rarely happens. At the start of the game, everyone is struggling to build up their good pool. As the game advances, the players who have built up a good pool usually will not find a trade partner because all that will do is help the player who is in the lead. I understand it helps both players, but we found the only way trading worked was when the players not in the lead traded among themselves.

Speaking of trading, one of the new developments, Shipping, felt a bit overpowered. Shipping allows a player to build a ship for one wood and one cloth. For every ship built, a player can exchange one good for another on that player’s pegboard. Collect a wood and then remove the wood for a spearhead. Repeat. I have seen people win without using ships, but MOST of our winners at least bought this development and utilized their ships once or twice.

I enjoyed Roll Through The Ages. It is not the heaviest game ever, and the theme is pasted on (which can probably be said for all dice rolling games), but it presented good decisions and press your luck mechanics that made the game fun. Another bonus is that it travels well! While I wish that the free expansion would have been included in the reprint, at least it’s there for players that want a bit more depth in their plays of Roll Through The Ages.

If you’d like to pick up a cop of Roll Through The Ages: The Bronze Age, you can get it for about $40.

Hits:
• Push your luck with the dice rolling was fun, especially in a civilization theme
• The handling of the goods on the pegboard was unique
• A great game for families
• Travels well due to its small footprint

Misses:
• Can be long for what many would consider a dice rolling filler
• Ships can be too tempting to pass up
• Lack of the print and play expansion being included in the game