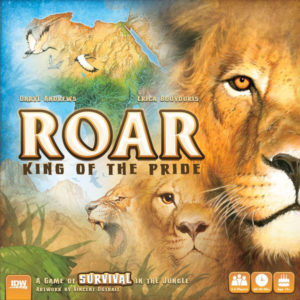 Roar: King of the Pride has players taking the role of a breed of lions trying to rule over Africa. It’s kind of like The Lion King: The Board Game. And, just like The Lion King, it’s not all happy-go-lucky lions roaming around without a care. There will be lots of dead lions.

Today we are taking a look at how Roar stacks up to other area control games. Players will breed, manage their food supply, and fight other prides over territories trying to dominate as much territory as possible. Roar: King of the Pride plays 3-6 players in about 60-90 minutes. It plays best with 5 or 6.

Roar: King of the Pride almost feels like a war game. You will control your pride of lions, moving them throughout Africa, attacking other lions and avoiding the invading human tribes. The game is played over a fixed number of rounds, based on player count, and then majorities are scored for various categories.

There are six asymmetric lion breeds available in the game, giving each player a unique ability, starting location, and food reserve. After initial setup, each player will take 2 actions on their turn. Once the round ends some clean up happens, and then a new round begins. The game moves along quite quickly and downtime is almost nonexistent.

The actions you can take include:

After all player turns, you must make sure your lions have enough food to eat. Each area on the board will supply you with a number of food. As long as the areas you control produce at least the number you require, everyone is happy and full. Otherwise, your pride will starve and you’ll have to remove lions from the board.

Baby lions grow into cubs and reveal their gender. Cubs then grow into adults in the following round. So while breeding is important, you must do so strategically as they can’t move to a new region until they are adults. They can be left alone, but are then very likely to be attacked by an opposing player.

Finally the first player marker rotates and the new first player gets to place one of the human huts on the board. The placement of this hut can force prides to have to retreat or cut them off from moving easily. It’s possible to move through a human settlement, but will cost you one of your adult lion or lionesses to make it through.

After the set number of rounds the game ends. Players score points for having the most lions, lionesses, territories, and food supply. There are also secret mission cards that can score throughout the game. The player with the most points is the ruling pride of Africa!

Lions are mean. Very mean. Roar: King of the Pride is a mean game. That said, it can also be a lot of fun. There have been comparisons made to Risk, but I think those are largely misguided. It is, thankfully, much shorter and the combat isn’t settled by millions of dice rolls.

In fact, the combat in Roar is one of my favorite things about this game. Attacking another pride is relatively benign affair. The defeated pride just had to give up the territory. Some may be turned off by this—toothless—combat, but it helps soften the blow of being attacked in a lot of cases, but it’s still impactful. Downstream it can be devastating if you lose a significant amount of food supply.

Unless you’ve let yourself get surrounded and there is nowhere to retreat. In those cases your lions will disappear, presumably eaten by my much cooler, stronger, lions. This gives the game a fair number of interesting choices to make when you want to spread out to collect more and more food. Doing so, however, thins out your breed and opens you up to being attacked or having your lionesses roared by a neighboring breed.

Even though combat isn’t dice-based, the breeding is. When you take the breeding action you can make between zero and three babies. If you roll a zero, you do get a compensatory bonus token that can be used to boost an action later. Having the most lions is key to everything in Roar and the reliance on die rolling can be frustrating at best.

It is also worth mentioning that the game looks great. The artwork is done by Vincent Dutrait and really makes the board and player cards come to life. There isn’t a ton of different artwork, but what is there is beautiful. Each player also gets lion and lioness meeples that are roughly lion-looking and are easy to differentiate on the board.

The game scales rounds based on player count. Especially at the lower counts the number of rounds is likely too long and I would have happily had a game a few turns shorter. The end of the game scoring is a bit odd as there are so many majorities to score and they all more or less relate to having lions and territories. There isn’t really multiple paths to victory. I do like that each breed has a special ability which will give players at least a slightly different advantage in how to get there.

Roar is certainly an enjoyable experience if you don’t mind the direct player-on-player conflict. You are very likely to be eating the cute little lion babies of your friends. If you can deal with the ramifications of that then Roar: King of the Pride may be a great game for you.

The game length and randomness of the breeding drags down the score a little. You can certainly win despite bad rolling, but it will make your life harder. The scoring feels anticlimactic after the game is over, but serves well enough to reward whoever has spread out their breed. Overall Roar: King of the Pride is good for players wanting a light war game with beautiful production values.

Final Score: 3.5 Stars – Feels a bit like an intro level war game. Looks great and is plenty of fun if you don’t mind attacking others.

Misses:
• Can be incredibly mean as players will attack each other.
• Game drags on past its hopeful end, especially at 3-4 players.
• Scoring system is a bit of a letdown.