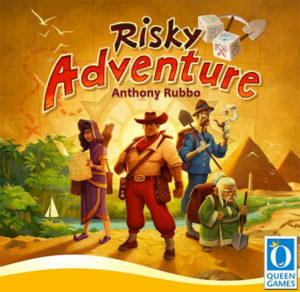 One of the most iconic sequences in all of film history is the opening credits adventure of Indiana Jones in the movie (now) titled Indiana Jones and the Raiders of the Lost Ark. The series of threats that layer themselves into the attempt to acquire the gold artifact perfectly describe the risks that audiences and gamers want from a pulp era adventure game. Does the same engagement occur if the risks are abstracted to dice rolls? In Risky Adventure, Queen Games and designer Anthony Rubbo are seeking to answer that question.

Risky Adventure is a dice rolling, press-your-luck game for 2-4 players that takes at most 1 hour to play. Risky Adventure plays best with 2 or 3 players.

Players in Risky Adventure control teams of seemingly amateur archaeologists operating between their camp, an excavation, and an expedition in a variety of exotic locations.

A player’s turn requires them to take their three standee-adventurers and place them at particular spots to try to acquire the space’s reward. The player will then roll the four dice to match symbols for where their adventurers are located. If a player can match the symbols, they collect the rewards from spaces they choose since there won’t be enough dice for all spaces. On the camp board this will be discounts, bonuses, and/or scarab artifacts. Discounts offer free dice symbols for the Excavations while bonuses offer extra points or clock tokens which allow players to choose the side of unhelpful dice rolls.

Expeditions or Excavations will offer different kinds of ways to acquire points. Excavations will require higher value dice rolls, and as such, discounts (from Camp spaces) are necessary to make them easier to collect. However, the Excavations give the player a chance at collecting artifacts, the main source of points in the game. The Expedition path doesn’t benefit from discounts, but the bonus tiles from Camp will allow a player to collect additional points for each movement. The Expedition also allows players to gain points, wild artifacts, and treasure maps which act like goals for additional end game points. If a player makes their way to the end of an Expedition path, a new one is randomly drawn.

The game ends when one of the board locations runs out of tiles or if two Expedition maps have been completed. The player with the most points from artifacts and additional points from scarabs or treasure maps wins the game.

Like any press-your-luck game, players are at the whim of a random game element. What typically makes these games succeed or fail lies in the ways players can still feel a sense of choice and engage with the thrill of succeeding. However, the kind of choices available and whether or not other players can disrupt those choices can entirely break the design pattern.

The first thing players should recognize is that most good press-your-luck games have low player interaction. There’s enough threat in not succeeding with your chosen goals for the turn that having other players add fuel to the fire doesn’t need to enter the concept. What this also means is that turns go by with only the active player making choices and there’s not much to do until the turn comes back around. This downtime can be long depending on how analysis paralysis prone players are.

The second thing players will need to accept is that press-your-luck games are random depending on how much players want to risk. In this case, each unsuccessful turn is wasted time, giving opponents a chance to move ahead. And if this does happen to a player, Risky Adventure, be forewarned, offers minimal ways to catch up. However, this shouldn’t happen frequently as there are a few ways to mitigate bad dice rolls. Clock tokens, spreading adventurers around, and gaining the right equipment all serve this purpose.

The third and final thing that gamers should accept is that when a press-your-luck game works, it’s obvious. The feeling that waiting for a turn isn’t so bad as long as the precious dice return should be expected. On this, Risky Adventure definitely delivers. Watching opponents move ahead and collect more artifacts can be frustrating. If players don’t do well accepting this kind of luck, the “adventure” here will not be appreciated.

It is precisely the dice that are at the heart of much of the fun in this game. Because the dice sides are non-standard, calculating odds needs some mental math. It’s easier to just understand the progression of symbol commonality as a series of increasing risk. This makes it much more light gamer friendly.

Once gamers accept these things, they’ll realize that Risky Adventure works perfectly as a family style game. It can be just enough for a light gaming crowd or couples that just like some whimsical dice rolling. If a game group demands more than this, then likely “Risky Adventure” will be describing the purchase instead of the gameplay.

It’s easy to think that a review which calls out downtime, interaction, and randomness in gameplay would be an instant turnoff for such a light game. However, Risky Adventure can win over gamers despite these things. As with any press-your-luck game, it can’t be taken too seriously. However, when players succeed with each roll, it delivers that feeling that the choices a player makes do matter, the downtime wasn’t so bad, and more interaction isn’t needed at all. Risky Adventure is an easy recommendation to gaming families who don’t mind waiting for exciting turns.

Final Score: 3.5 Stars – Despite downtime and mostly random gameplay, there is interesting challenge in Risky Adventure. It works best with family gatherings and gamers who love to take… (sorry) risks.