Board Game Review by::
Andrew Smith

We review Ride the Rails from Capstone Games. This 18xx game not only looks great, but plays really well also. In addition to the core game, we also talk about the expansion maps for Ride the Rails. 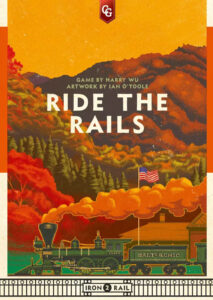 As a board gamer who enjoys train games, I’m used to playing games that are sometimes not very good to look at. But in 2014, Capstone Games reprinted Irish Gauge, a fan favorite cube rail game with brand new art from Ian O’Toole, and announced their Iron Rail series of games.

Well, today we are looking at Ride the Rails, the second game in that series. As far as cube rail games go, it has quite a different bend to it—no auctions and the board is full of passengers to pick up and deliver somewhere. So the only question that remains is if it’s different in a good way or a bad way?

Unlike many cube rail type games, Ride the Rails does not start with an auction. Instead, in each round, every player just picks a share to add to their portfolio. In the first round, only the blue and red companies are available. In each subsequent round, a new company will become available (except in the final round).

Once every player has chosen a new share you can then build a track for any company you own at least one share of. The number of trains you get to play scales differently based on player count, but generally, you’ll be placing trains in a way to get to as many cities as possible. All of a single company’s track must connect but can branch out in multiple directions if needed.

At setup, every city has a passenger waiting to be delivered elsewhere on the map. (Interestingly none of these passengers care where they are going, they just want to get out of town apparently.) The final action of the round is to deliver a passenger to a new city. The active player gets a point for every city they visit, regardless of what trains they ride to get there. But all shareholders also get a point per share each time a passenger takes one of their routes between the cities.

Turn order resets each round based on the players’ current points. The player with the most points goes last and whoever is behind will go first. And the first phase, choosing a new share, happens in reverse turn order. So being in the lead will put you in a significantly worse position for the next round, making managing exactly when you score points sometimes an important consideration.

Each map also has a few special rules. The base game includes a map of the United States where additional points are earned for reaching Chicago or being the first player to make a transcontinental connection between the coasts. I’ll talk a bit more about the other maps later.

After six rounds the player with the most points is the winner.

Full disclosure, I love cube rail games. And it’s because of some characteristics they all share:

Ride the Rails hits all these points. And while leaving it at that makes for a subpar review, you probably could just stop reading now. But if you want more details…

First off, I appreciate that shares aren’t distributed in an auction here. Sitting down for your first play of a game and immediately having to bid on something without having the experience to understand what a “good” value is makes for some bad initial plays. Ride the Rails doesn’t ever ask you to put a monetary value on your shares. Just pick one, there is no cost, and all there is to consider is how much it’s going to earn you for the rest of the game.

It does make for really fun shifting alliances as well. In the first round, there are only two companies so some folks will undoubtedly be working together. But you and I may be happily invested in the blue company but if you double-up with another blue share next round I might just decide to go into a new company and siphon profits and leave you to do all the hard work.

One of the fun emergent factors here is that when you take a share you remove a train from its supply and put it on your personal board to track your investments. This, however, leaves the company with one fewer train to use out on the map. While a single train here or there may not seem like a big deal it’s surprising how often the decision on how to allocate trains between shares and actually using them comes up.

The biggest problem in Ride the Rails is just tracking the scores with each delivery. When you move a passenger around the map you’ll have to count the total cities visited and count how many times each company’s train route was used. The board has a nice area to track all this which certainly helps the process. Then you’ll have to multiply those numbers based on the number of shares and give everyone their points. Once you get the hang of it, it’s not too bad. But it does take some time and it’s never the most fun part.

And now—the maps. Ride the Rails has two double-sided expansion maps. France/Germany and Australia/Canada. Each map has different bonuses and a few tweaks to the rules. The different experiences really stem from the layouts of the maps rather than rule changes. I’ve enjoyed all the maps and if you find yourself absolutely loving Ride the Rails, you may want to check them out. But they are by no means required and it’s possible your extra money might be better having another cube rails game on the shelf.

An auction-less cube rail game that ticks all of the boxes that make this game style one I continually find myself revisiting. Even with just the base game map, you’ll find yourself learning something new about the interactions in Ride the Rails with each play.

Be warned it can be mean and you will be interacting directly with the other train magnates at the table, for better or worse. If you are ok with the occasional meanness and a little bit of mathematical downtime when scoring, Ride the Rails definitely feels unique and has a place on the cube rail shelves.

Final Score: 4 Stars – Easy to teach, no auctions to fret over, and a lot of interactions between players. Start with the base games and add some maps if you get hooked.

Hits:
• No auctions make it a great place to introduce new players to cube rails.
• Lots of working with other players and then suddenly working against them.
• Plenty of strategies to explore with repeated plays.

Misses:
• Scoring is a bit cumbersome.
• Extra maps don’t fit in the box and that’s minor but I really want them to.