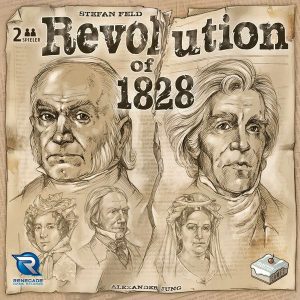 Stefan Feld’s name carries a lot of weight in board game circles. He’s basically board game royalty. He’s designed classics like Castles of Burgundy, Trajan, and Notre Dame. He continues to create new games that are warmly received, like last year’s Carpe Diem. These eurogames are often described as “point salad” games where you score points for nearly everything, but the winner is the one who can find the best combos and most efficient use of their actions.

So, what in the world does that have to do with this 2-player abstract game we are looking at today? A game also lightly themed around the presidential election between Andrew Jackson and John Quincy Adams? Well, it turns out Mr. Feld has branched out into the abstract genre and given us Revolution of 1828.

In Revolution of 1828, you and your opponent will battle over collecting the most votes by influencing electors. The board is divided into six sections, five that correspond to different regions that the electors are from, and the sixth representing the influence of the press. Each round three tiles are randomly placed in each section and every turn you’ll take a tile and add it to your side.

When you take an election tile, you’ll place it on your side of the board next to the region it matches. There are also campaign tiles that give you special abilities when taken, like moving already chosen tiles or forcing your opponent to pick from a particular region on their next turn. The final type of tiles are smear campaigns—these act as election tiles of any color, so you can place them in whichever reason you choose. They are extremely powerful but can come back to haunt you.

After all tiles are claimed, each region is scored independently. If you have more election tiles than your opponent, you get a vote (or 2 if you were the only one). Then, whoever claimed the elector in each region scores one point for each tile they have. Finally, whoever has the editor on their side will have to give their opponent votes for each smear campaign they ran. All tiles clear between rounds except the smear campaigns, so the editor can cost you a significant number of votes at the end of the game.

After four rounds, the player with the most votes is the winner and the new president of the United States.

Revolution of 1828 really just begs for more depth. Each round, after the tiles are randomly placed, you’ll make a couple of quick observations. First, are there any campaign tiles that let my opponent steal an election tile I’ve already claimed? If not, are there any regions for which only a single election tile exists? And from there, the turns play out.

You’ll spend the first six turns each making sure to not pick a tile in such a way that you leave a region with only a single tile—you don’t want to give your opponent a free extra turn. After the sixth pick, it basically changes into exchanging two turns at a time and trying to avoid being the person to claim the editor. In the first round or two it maybe doesn’t matter too much, but in the latter half of the game trying to avoid giving your opponent a fistful of votes will be way more important than anything else.

The campaign tile powers must be considered throughout the game as well. If you take the tile which allows you to dictate which region your opponent picks from next turn, you can set up your own free extra turns. The finance tiles can be turned back in, along with an additional campaign tile to immediately take an extra action. The biggest problem I’ve found is that both players generally want the same tiles and want to avoid the same tiles. You often feel like a lot of it is outside of your control as you must take a tile on your turn, and you must take a second one if you empty out an area. Try as you might, taking the smear campaign tiles or claiming the editor to your area is just sometimes completely unavoidable.

One of my favorite things about abstract games is their unique ability to make a simple move feel powerful. The double jump-into-king-me in Checkers. Double attacking with a single move in Chess. The input is the same…moving a piece to a new place on the board. But the outcome varies from “that didn’t seem to make much of a difference,” to “no way I can lose now.” In Revolution of 1828, the outcome doesn’t really seem to be that impactful either.

Each turn feels about as important as the turn before it. The next round feels a lot like the previous round. There isn’t much decision space to really have a new depth of strategy emerge from game to game. Revolution of 1828 isn’t bad, and the first play or two is certainly enjoyable. But the drop-off is steep and there are just much better options available for abstract gamers.

Final Score: 2.5 Stars – Interesting theme is barely utilized and the gameplay is overly repetitive and focuses heavily on not giving extra turns and claiming the editor.

Hits:
• The campaign tiles often give you a couple of levels to consider.
• Good production and artwork.

Misses:
• Each round plays out basically the same.
• The smear campaigns can be overly punitive.