We review Rallyman GT, a racing board game published by Holy Grail Games. In Rallyman GT, players are racing around the track trying to be the first player to cross the finish line. 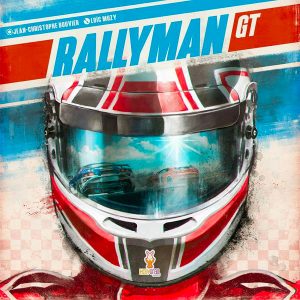 As a lifelong Indiana resident, I should probably be really into racing. Unfortunately, I’ve never even been to the Indy 500, or the Indianapolis Motor Speedway for that matter. It just isn’t my type of sport. But I love racing as a theme for a board game. There are plenty of ones already out there—Formula D, Downforce, Grand Prix. But today we are looking at Rallyman: GT, a reimplementation of 2009’s Rallyman.

Let’s take a look at what sets it apart from its predecessor and other racing games and see if Rallyman: GT deserves a spot on your game shelf.

Rallyman: GT starts by laying out the track to race on. The rulebook gives you numerous predefined layouts, some based on real world tracks, that can be created with the game’s hexagonal tiles. Of course, you are free to mostly lay them out in any manner you see fit.

Once you’ve got the track setup, it’s time to race. In turn order, players will lay out their dice, planning the route they want to take. There is a die for each gear available in the car and, generally, you’ll increment or decrement a gear with each subsequent die. So from the start you’ll be stopped (in gear 0), you’ll lay out gear die 1, then 2, then 3. There is only one die for each gear, so you can’t use the same value more than once in a single turn.

Of course later in the race you may end a turn moving. So if you start your turn in fifth gear you can move down to fourth or up to sixth. There are also coast die that let you maintain your current gear and brake dice that can allow you to step down more than a single gear at once, if needed. And you’ll often need to. Many of the turns and corners of the track will require that you enter and/or exit in a certain gear. If you exceed that speed you’ll spin out, fall off the track, and lose your next turn.

Now once you’ve laid out your path you also have to roll those dice. Each die has some faces with a hazard symbol. If you roll three hazards you’ll also spin out and, depending on the severity of the crash, potentially take damage in addition to stopping. You can choose to roll your dice one at a time, stopping whenever you like. Or you can go “flat out” and roll them all at once. If you successfully complete a “flat out” roll you’ll earn focus tokens that can be spent later to skip having to roll some of your dice.

It’s also important to keep in mind that other players can try to block you on the track. Turn order resets each round with the player in the highest gear going first (with ties broken by whoever is farthest along down the track). You can only move next to or overtake another racer if you are in an equal or higher gear.

Play continues until players complete the agreed-upon number of laps. The player who crosses the finish line in the fewest number of turns wins. If multiple racers finish in the same round ties are broken in the same method as turn order if determined, highest gear, and then whoever exceeded the finish line the farthest.

You might expect a game about racing cars to be fast-paced. But Rallyman: GT is surprisingly restrained in that respect. It chooses to focus on the tactical and strategic ideas—albeit abstracted a bit—of racing. A race in Rallyman: GT is methodical rather than break-neck.

When you get started you’ll often start by trying to just go as far as possible each round. Starting from the beginning this can be pretty simple, you’ll shift up from 1 to 2… all the way to sixth gear. Of course, if there are any turns you’ll have to be careful just how quickly you get up to speed or be prepared to stomp on the breaks very quickly, which can be quite risky.

You’ll also need to pay careful attention to the gear you are in at the end of your turn. Ending in a low gear can be risky. Not only will you go later in the turn order, you could easily find yourself blocked behind someone who started behind you but sped up and ended in a higher gear than you. If you are in first gear and a racer directly in front of you is in anything higher than second, you are effectively stuck and will spend your entire turn cursing into the void.

Some of these rules are mean and also pretty unintuitive. Does it make sense that you can’t pass someone going faster than you… of course. But isn’t everyone moving at the same time, in theory? Seen in the best light, it is an abstraction of the strategy of racing as a whole. In the worst, it’s just additional rules to make the game more interesting. Either way, it’s an important factor and adds a lot to consider as you plan your race strategy.

But racing isn’t all strategy and tactics. It’s also a lot of skill and, presumably, a bit of good luck. And Rallyman: GT has plenty of that too. You might spend your turn simply getting up to third gear and doing a little coasting, easing your way into the first corner. Maybe the four dice you have to roll only have 2 hazard symbols on them and you need three hazards to crash. You’ll likely go “flat out,” what are the chances it all goes wrong? Well, it can happen. And it does happen. And it can make it very hard to get back in the race.

Depending on how fast you were going and how dangerous the track is where you happened to crash, you’ll either start from gear “0” next turn or spend a whole turn doing nothing and then starting the following turn. You can also be forced to draw damage tokens which can cause a caution (where no cars can pass anyone), remove some of the dice from your dice pool, or even pull a random weather change event.

If there is plenty of blocking and a bit more interaction among the leaders it can be possible to force your way back into the race. But it isn’t always possible. If someone breaks free of the pack it is tough to catch them. Is that a bad thing? Runaway leader is generally a “con” in a board game review. While some kind of drafting mechanism for trailing racers would be a welcome addition, Rallyman: GT offers nothing of the sort.

I’ve played Rallyman: GT with a number of different groups and players and the reactions have been very polarized. There are a lot of things that happen that are just traditionally thought of as being “bad”. Runaway leaders. Bad dice rolls that can ruin games. And rules that aren’t particularly intuitive that can lead to players losing turns.

But, I have to say, I love it. I love everything about Rallyman GT. I love cutting in front of someone who ended their turn trying to squeak out every bit of distance and slowed down too much. I love going way too fast into a corner and being forced to roll a ton of brake dice, hoping to survive as my last chance to pull ahead in the final lap. I even love as I’m coasting in a low gear down a straightaway and somehow roll so unexpectedly poorly that I lose control and crash despite almost no risk. And maybe I’ll even take some damage, cause a caution, and prevent someone else that is on the other side of the track from being able to take the lead.

That’s just racing. (I assume, as a person that isn’t really a race fan.) There is strategic planning. There are tactical decisions. And there is plenty of just getting lucky and hoping everyone else stays out of your way as you cruise to a victory.

Final Score: 4.5 Stars – Easily my favorite racing game. The perfect mix of strategy and randomness for what I want a racing game to be.

Hits:
• Tactical decision making where you have to plan more than just a single turn at a time.
• Rulebook provides plenty of track designs and the combinations are nearly infinite.
• Provides a lot of “stand up around the table while I make this roll” type of moments.

Misses:
• If a player breaks away it can be difficult to catch them.
• Output randomness can be swingy and even the smallest risks are still risky.