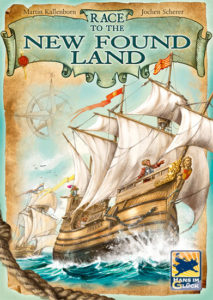 Euro games of yesteryear are sometimes looked at fondly for their great gameplay despite a pasted on theme and lackluster art. Recently it seems that we’ve been in a new world where lines between thematic and euro-style games are blurred. Previously dry, boring, euros have more theme and even come with useless plastic miniatures to replace the way-more-exciting wooden cubes. More importantly, they have some unique hooks that make them stand out from the crowded field of board games today.

Today we are looking at Race to the New Found Land, which stylistically looks a lot like the euros of the past. But does it have something new that caught us by surprise? Let’s find out.

Race to the New Found Land is an area control and resource management game for 2-4 players. It plays in about an hour.

In Race to the New Found Land, players will control a country attempting to discover and settle the eastern shores of Canada over four rounds. Each country has a starting ship and will acquire resources to build additional ships throughout the game, using them to perform discovery, settlement, and delivery actions.

At the beginning of each round, players receive income and have the opportunity to buy additional ships, unlock their country’s special ability, or build an additional shipyard. These all cost resources that can also be delivered for victory points, so players have to manage how and when they spend the resources they’ve gathered.

The bulk of your points will be scored based on the number of your country’s cubes you place on the islands, by discovering and settling, and the cities, by making deliveries.

When buying a new ship you have four different values to consider. Three of those values translate into how powerful of an action you can take with that ship. The fourth value, the ship’s speed, will determine the order in which players will get to use their actions that round.

After the purchasing phase, players will assign their ships to the various actions:

When an island or city is completely filled, it scores for area majority at the end of that round. Players score a point for every cube they have in the area and then the player with the most and second-most will score additional points. At the end of the game, any unscored areas will also score one-point per cube, but no majority bonuses are awarded. The player with the most points is the winner.

The most interesting aspect of Race to the New Found Land is the idea that your ships each have various specialties. A ship with a high cargo value is great to use on the load action to get an otherwise hard to acquire resource or fulfill an expensive contract, for instance. But the game only plays out in four rounds and by the time you acquire the better ships, you likely only have a couple of rounds left. So you’ll get to use them once or twice—hardly enough to feel like you’ve really specialized in anything.

Worse yet, discovering is almost always the best action for every one of your ships. When you take the discover action you get to place land tiles on the board and immediately place one of your cubes on them, adding to your control of that area. In addition, you get both bonuses on that tile, allowing you to acquire goods much more quickly than you would through other actions. Every other action is a trade-off between getting resources or adding to the area majorities—discovering does both. The fact that at least half your ships will be discovering each and every turn means you have even fewer interesting decisions to make throughout the game.

Player interaction is minimal. You’ll obviously be competing for area majorities and delivering contracts. The speed of the ships you have assigned to an action determine who gets to complete that action first, so you will occasionally have to keep an eye on if someone is going to take the deliver action before you that they may snipe that contract you are meaning to fulfill.

There are a couple runaway leader producing mechanisms at play here as well. As players hit the VP milestones they will get first look at objective cards and have the most to choose from. This allows them to take more valuable goals. Or at least the ones they’ve already completed. The score track also ends at 50 and when a player exceeds 50 points they take a 50 point card the gives them additional bonus points. So literally making the rich richer. There isn’t any offsetting “turtling” strategy where you can build up slower for a bigger pay off at the end, so these mechanisms fly in the face of good board game design.

Each country having a different power also was underwhelming as you don’t unlock that ability until you pay resources for it at the start of a round. So in the best case scenario, you’ll have it for 3/4 of the game, but that will likely be at the expense of building more ships which is really where you should be using the resources you have available to you.

At the end of the day, if you like euro games and sit down to play Race to the New Found Land, you won’t necessarily be bothered by it. It isn’t broken by any means, but unfortunately there just isn’t anything good about it either. Race to the New Found Land feels like a game that was designed 15 years ago that just managed to see the light of day somehow in 2018. We hold our games to a higher standard today of integrating theme, creating tension, and forcing tough decisions.

If you want to play a game about fulfilling contracts and controlling areas there are dozens, if not hundreds, of better games out there.

Hits:
• Perfectly playable, even if it’s very bland.
• There is some player interaction with delivering contracts that can be interesting.

Misses:
• Discover action is far more powerful.
• Limited rounds don’t let you build much of a specialization.
• Players with the most VPs are constantly rewarded with more VPs.