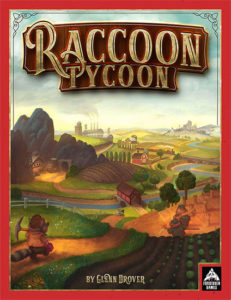 “After all, the best part of a holiday is perhaps not so much to be resting yourself, as to see all the other fellows busy working.” ~The Wind in the Willows

If Wind in the Willows met the board game renaissance, their baby would be Raccoon Tycoon. This game combines set collection, commodity exchange, engine building, and bidding into a terrific intro game for new players or gamers looking for a something longer and more in-depth that you could still have a conversation over. A light euro for two to five players, Raccoon Tycoon takes about an hour to play. Its sweet spot is 3-4 players.

In Raccoon Tycoon, you play as well dressed, business savvy, animal tycoon, guiding the bustling town of Astoria through its gilded age. Starting with producing valuable commodities (wheat, wood, iron, etc.) you’ll use your market prowess and economic sensibilities to buy and sell while building a thriving town and railroad.

The game has five actions:

Production – Helps you obtain new goods and raise the price for them on the value track. There are six commodities: wood, wheat, coal, iron, goods, and luxuries. These resources are used to help purchase towns as well as to gain money. When you play a production card, you’ll obtain some of the pictured commodities then raise values of the pictured resources on the values tracker.

Selling – This is the money generator of the game. With the selling action you’ll sell back one type of resources you’ve produced, hopefully at a profit. After selling, you’ll reduce the value on the tracker for future sellers.

Railroad Auction – Collecting sets of railroad cards awards points at the end of the game. To start an auction, simply choose from the available railroad cards and start the bidding. If the player starting doesn’t win, they have the option of choosing another action.

Building – Buildings either aid in goods production or give a bonus of some type: additional resource production, a bonus to buying/selling, added value to end game, etc. They can be purchased with money

I have several game groups, but only one that I get to drag out heavy euros with. It’s a shame – not just because I love a good euro, but because I’m sure more of my friends would as well if they could get past “omg how many pieces are in this game.”

Raccoon Tycoon seems a natural bridge for the more casual player and the hard core euro crowd. The game contains a lot of the mechanics you’d see in larger, more complex games but in a simpler, more accessible format. It’s easy to explain and forgiving of a bad turn. Cards are easy to read, and the symbology is very straightforward. Each of the actions are basic enough that it doesn’t take long to catch on to the how and why of game play.

Additionally, I fell in love with the art. Annie Stegg Gerard’s gorgeous landscape and complete adorable animals are hands down some of the prettiest things I’ve seen in a board game. There are tons of fantastic, economic based games out there but I can’t name one with a badger in a waistcoat.

With lots of economic strategy in a lighter package, Raccoon Tycoon is a highly accessible intro to euro games for newcomers as well as a fun, straightforward game for players that love the genre. This one is a welcome addition to my game shelves, and definitely worth a play through (or three) at your next game night.

Raccoon Tycoon launches tomorrow on Kickstarter, so check back then and we’ll update the preview with a link to their campaign page.