We review the new edition of Quartermaster General, published by Ares Games. In this fast-paced World War 2 game, players are trying to earn the most victory points by controlling supply lines and home countries. 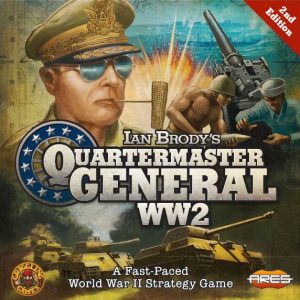 Did you know that it’s incredibly rare to find a board game themed around World War 2? OK, yes, I’m joking. Next to Cthulhu and trading in the Mediterranean region, that’s probably one of the most ubiquitous themes for tabletop games. While I do still enjoy a game of Axis and Allies or Memoir 44 every now and then, there is one title that has always piqued my curiosity… Quartermaster General. This WW2 game is not centered around massive battles of armies, but supply lines and logistics. It’s a unique take on the war that I’ve always had a desire to try out.

The goal in Quartermaster General is for your team to have the most victory points at the end of 20 rounds (or to be ahead by 30 points at the end of any round). Depending on the number of players, each person will control up to three countries. Germany, Japan, and Italy form one team, while Great Britain, Russia, and the United States form the other. Every country is represented with a unique deck and a handful of armies and naval ships.

Each of the game’s 20 rounds has the countries taking a turn in the same order. On a player’s turn, they must play a card from their hand, remove any pieces that are “out of supply”, collect victory points, and draw back up to 7 cards. A country earns 2 victory points for controlling a “starred” supply space or home country.

The main focus of the game revolves around keeping your armies supplied. A unit is in supply if you can trace a line of your units back to a supply space.

There are different types of cards in each deck as well. Every player has different amounts of Build cards (army and navy) as well as Land and Sea battles. Adding on to those are event cards, Status cards (give you permanent, unique powers), response cards, and economic warfare cards (force your opponent to discard).

Battles are diceless affairs, you simply target a space adjacent to your unit and remove the enemies’ piece. Easy peasy.

After playing a bunch of games of Quartermaster General, I can see why it’s been so popular for so long. It really does provide a unique World War 2 experience in around 90 minutes. After playing 3-4 hour games of Axis and Allies in the past, that’s a welcome change. Even with its diceless combat and shorter play time, it’s still a really thematic game thanks to the unique decks. Each deck is tailored around the real-life counterpart from history.

For example, Germany’s deck is the juggernaut of abilities you’d expect, while Russia focuses on land battles and has only one ship. The United States also has a thick deck, but much like you’d expect, they struggle to make an impact in the game until later rounds. However, once they’d upgraded and advanced on the board, they are a force to be reckoned with.

These asymmetrical decks are also why it will probably take a play or two to really dial into the strategy of the game. Expect new players to routinely get trounced by an experienced player, as knowing what’s in your deck can be crucial to your strategy. For example, Russia is a force if they can hold Moscow and get some of their status cards in play. When that happens, their land battles can really shift the tide of the game.

Speaking of cards, the one downside of this being a card-driven game is that the luck of the draw can absolutely have an effect on the game. In one match, I didn’t draw a single build card for the US until about round 5-6. As you can imagine, that’s super frustrating. Thankfully this new edition includes an optional rule calls “Reallocate resources” that lets you discard 4 cards at the start of your turn to dig for any basic Build or Battle card. While it can be painful to lose four cards, especially in a game where cards are the lifeblood of your engine, it can also help mitigate a bad draw a little bit.

One of the great things about Quartermaster General though is how every card feels important and awesome. At the start of the game, you draw 10 cards and discard down to 7. Let me tell you, dumping those three cards is painful. But not nearly as bad as being hit by an economic warfare card. Players will cackle with glee as they force their opponent to discard cards from the top of their draw deck. If you can get Germany to dump their blitzkrieg card without even being able to use it, that’s a huge coup.

When it comes to player scaling, Quartermaster General players best with 6 players and its no contest. Each player controls their own country and turns go by fast enough that downtime isn’t a huge issue. If you don’t have 6 players, the game does work well at other player counts, with 2 players being my second favorite way to play.

Finally, the only other thing I had an issue with in the game was keeping track of victory points. At the end of each player’s turn, they collect VPs for each supply space they control. Let me tell you, this can be really fiddly and I guarantee you someone will forget to collect their VPs at least once (if not more) during the game. While I don’t have a better solution to this, it’s something to be aware of.

Quartermaster General ended up being one of those “where have you been all my life” types of games. I really enjoyed the streamlined nature of the gameplay which was both entertaining and easy to teach. This is one of those games where you are going to want to try out each and every country because they all play so differently. Who would have thought that a game about managing supply lines during a war would be so interesting, but it is.

If you are looking for a dice chucker with tons of combat, this isn’t the game for you. But if you want a compelling game that will give you a ton of unique and fun cards to play as you get to simulate WW2 in a shorter time frame, Quartermaster General is absolutely worth adding to your collection.

Final Score: 4.5 Stars ­– A new edition brings this unique take on WW2 back into the spotlight with its updated rules and components, without showing any sign of its age.

Misses:
• Need 6 players for the best experience
• Luck of the draw can affect the game